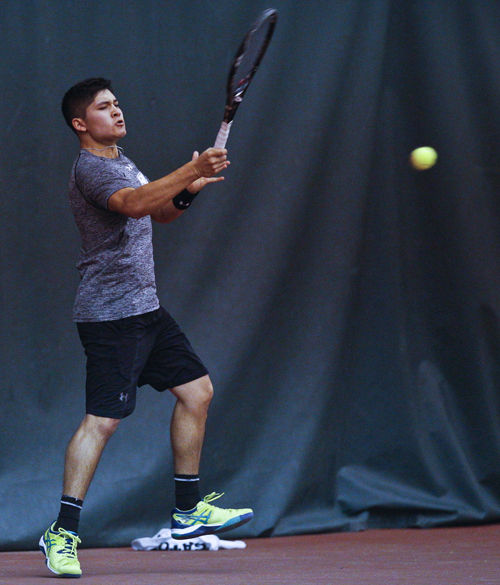 The Saluki men’s and women’s tennis teams might host their final home matches ever on Saturday and April 17, respectively.

Both teams could be eliminated next season as a result of Gov. Bruce Rauner’s proposed fiscal year 2017 budget, according to an email sent by SIU President Randy Dunn last month.

“We really hope this is not our last home match ever,” said men’s coach Dann Nelson.

After Saturday’s match against Illinois State (8-10), the men have two more road matches before the Missouri Valley Conference Team Championships from April 29 to May 1 in Wichita, Kan.

Southern’s women have three more road matches between their last home matches, which are against Northern Iowa (3-11, 0-1) and Drake (10-7, 1-0), and the MVC Team Championships on the same dates in the same place as the men.

Cutting the two programs would save the school $688,000. Those are the only explicit mentions about Saluki Athletics in the proposed cuts.

Director of Athletics Tommy Bell previously said he wants to do everything possible to keep the teams at SIU. He said there is no official plan of action.

“A lot of people I’ve spoken to have been, not upset but … well, I guess disappointed to hear the possibility of the tennis teams being cut,” said senior Jonny Rigby. “I think if everyone came out to support, it’d show the tennis team does matter to people. It would definitely be a good feeling from all of us players to see the support from everyone.”

Rigby is the only senior on the two teams.

MORE: Rigby to be honored Saturday

Both women’s coach Audra Anderson and Nelson predict tough matches for their final home matches of the season.

“We go back and forth between [Northern Iowa and Drake] year to year,” Anderson said. “I really like the fact that we’re home against those two. We play really well at home.”

Anderson’s team is 34-3 in the four most recent seasons.

“I’m expecting a tough match,” Nelson said. “[Illinois State] could be one of the deepest teams in the Valley. We’ve had really close ones with them year after year after year. It’s always close.”

The final home match for both teams are Maroon Games, which means each SIU athlete who attends gives their respected team a point in the Saluki Cup race — a competition between every Saluki team that rewards points for community and school spirit.

Both teams are planning on having some free food for fans to boost their experience.

Sean Carley contributed to this story.