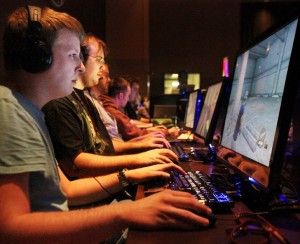 The tournament had only just begun. Michael Cinquegrani ran rampant through the war-torn environment, killing 150 people with his M-16 assault rifle in less than an hour.

After the final match, he was awarded with computer memory, sponsored by Kingston. Cinquegrani said he was able to take home the prize by moving around and being an aggressive player.

He was playing “Call of Duty 4: Modern Warfare” on the PC.

Cinquegrani, an undecided freshman from Mt. Prospect, was one of around 100 participants Saturday in SalukiLAN, an event when gamers gathered to compete and unite with one another through video games.

The Association of Computing Machinery, a Registered Student Organization created to help further understanding of technology on campus, was the host of the event, which was held at the Student Center in Ballrooms B, C and D. The event lasted 18 hours and is the third SalukiLAN since spring 2009.

“The biggest thing that makes this a big event is the fact that there’s no other big gaming event in the Carbondale area,” said Kevin Reuter, a nondeclared graduate student from Granite City and president of the RSO.

This year the event was held for a greater cause than uniting players: to provide aid for a charity called Child’s Play.

According to the charity’s website, it is dedicated to improving the lives of children with donations of toys and games to more than 70 hospitals nationwide. With donations, the charity purchases new consoles, games and toys for hospitals and therapy facilities.

The website said Child’s Play aims to make children’s time in hospitals and facilities more enjoyable by creating an environment where interacting with peers can be easier.

Reuter said the ACM had an idea last year to raise money for a charity using SalukiLAN.

“Child’s Play really just fit with this event,” he said.

Reuter said Child’s Play fit because of the charity’s passion to give video games, movies and board games to terminally ill children.

Sarah Harvey, former president of SIUC’s ACM and a doctoral student from Waterloo University, said SalukiLAN raised money for the charity by selling T-shirts and Ethernet cords during gameplay.

Harvey said she and other staff members donated prizes in order to draw people to the event.

These prizes were distributed in various tournaments during the event, which included games such as “Star Craft 2,” “League of Legends,” “Halo 3” and “Call of Duty: Modern Warfare 3.”

While the ACM has a function to teach technology on campus, Reuter said SalukiLAN has a different function.

“The goal of the event is just to have fun,” Reuter said.