Zumba classes shake things up at the Recreation Center 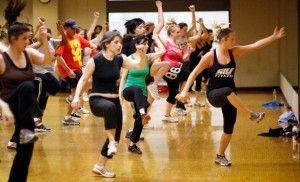 A workout doesn’t have to be a grueling experience, filled with the grunts and strains of a body under pressure. Proof to this testament was seen in the Tuesday night Zumba class at the Recreation Center, where nearly 140 participants danced themselves into shape.

The high-intensity dance aerobics of Zumba seemed to create a gender gap among people at the Recreation Center, as bowed-up weightlifters cruised by the classes jokingly imitating momentarily seen Zumba moves. In Zumba, it becomes clear upon entry that all pride should be left at the door for first-time participants.

The gender ratio is mostly female, and the hip gyration needed to properly participate can often serve as an obstacle to men without the necessitated “whip” in their hips.  But even if you can’t keep time, an hour’s worth of alien muscle movement will segue to soreness come morning.

Charley Robinson, a sophomore studying musical theatre, said he found Zumba a little more familiar his first time around than some of the other rookie members.

“With my major I have to dance a lot,” Robinson said. “I take a lot of dance classes, but this is really fun to me.”

Fun plays a huge role in Zumba, and being bashful has no place. Even if dancing isn’t your thing, Zumba is a great way to let loose and learn a thing or two about what it really takes to shake what your momma gave you.

“It’s the highlight of my day,” Novelli said. “I downloaded all of the Zumba songs and do them at my apartment.”

Zumba appeals to music and dance lovers as a fun and upbeat way to decrease stress and improve their mood.

Both have seen their classes grow in diversity and size, and  both said they are true believers in the power of their craft.

“It’s become popular because people don’t know they’re working out,” Bunner said. “There are a lot of different Zumba classes here for all sorts of people.”