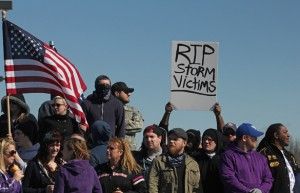 The copper cross that once stood on the steeple of St. Joseph’s Catholic Church in Ridgway was bent and battered from the more than two block fall it took after Wednesday’s tornado, but the community still looked up to it at a Sunday service.

The cross was hung at a community memorial service held at the gymnasium that still stands at St. Joseph’s Church, though a roof had to be repaired to use the building. The service, which consisted of Bible passages read aloud, hymns sung by a choir, and candle lighting in honor of those lost in the recent tornado, wasn’t only for those who were a part of the church.

A sign on the door read: “All Are Welcome.”

“I’ve seen the strength of faith these past few days that are utterly remarkable,” said the Rev. Steven Beaty, St. Joseph’s priest.

About 20 miles from where an EF4 tornado hit Harrisburg, killing six people and injuring 100, the same tornado destroyed buildings and homes in the small town of Ridgway.

Many in the community were devastated when they heard and saw all that was left of the church built in the 1890s was the front doors and the marble altar, which will be taken down in pieces.

Chris Wargel, a volunteer Ridgway firefighter and lifelong resident, said when he left his house early Wednesday after the tornado hit and could not see the steeple on the church, he knew the town was damaged.

When Wargel found out the church he was married and confirmed in was destroyed, he said he called his wife and told her.

Kim Drone, who was volunteering Saturday, said the Drone’s were one of the three founding families of the church. She said her middle son was just married in it in October.

Drone was one of the volunteers in the crowded fire department Saturday that now serves as a drop-off location for donations and a starting point for those who want to find out how to help. Volunteer organizers said the overwhelming support has brought the community together.

About 1,500 people had signed up since the storm to help the town of 840 people, organizers said.

Out of the 460 houses in town, 180 had damage to them and around 25 businesses were damaged. Most damage was to roofs and windows. While there were injuries, there were no fatalities in Ridgway.

One trailer flipped twice when high winds hit it, throwing two of the residents in the road and trapping two children in the remains of the home, who were soon cut out safely.

Florence Wilson, who will be 96 in April, didn’t know a storm had hit the town until her dog woke her up to be taken outside. The fence and gazebo in her yard were destroyed, and the house’s front windows were busted out.

She said she has never seen anything like the damage to the town.

“It has affected a lot of people,” she said.

Wargel said in a town where pretty much everyone knows one another, it wasn’t surprising how quickly everything was being cleaned up. He said Wednesday the town was littered with metal and insulation from damaged roofs.

Outside of town at the Ridgway Park, city workers and firefighters began burning storm debris Saturday. Workers also collected pieces of metal from roofs to be taken to a scrap yard. Proceeds will go to the city.

Jonathon Monken, director of the Illinois Emergency Management Agency, told community members Saturday the state and federal agencies would be in the town in the coming weeks to rebuild homes and buildings. He also pointed out the impressive community support.

On Sunday, more than 300 chairs were filled and dozens of people in their coats stood as the church choir sang beneath a basketball goal in the chilly gymnasium. As the choir sang, community members read off names of those who were killed in the tornado.

Ridgway resident Bo Drone said one of those killed in the storm was a friend of hers, Jaylynn Ferrell. She said before the ceremony, she had attended two visitations, as well as church in Shawneetown Sunday morning, where St. Joseph’s congregation held service because of the dilapidation of their own facility.

“This service was breathtaking,” she said. “The hole in our hearts will never heal, but they will mend.”

Lauren Duncan contributed to this report.