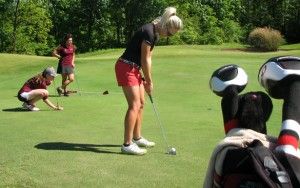 After Tuesday’s loss to Northern Iowa, one last tournament stands between the women’s golf team and the end of the season.

SIU will compete Sunday through Tuesday in the Missouri Valley Conference championships in Terre Haute, Ind.

The team fell to Northern Iowa Monday and Tuesday at the Creighton Classic, for the second time in as many weeks. The MVC championships will be the team’s final tournament, in which Wednesday’s pre-season championship poll has SIU seeded third, behind Missouri and Wichita State.

llinois State and Northern Iowa are the two teams who have defeated SIU this season, with Illinois State, the four-time defending champion in the MVC, picked alongside UNI to finish behind the Salukis.

Sophomore golfer Cassie Rushing tied individually for third place at the Creighton Classic. She said while NIU has outdone her team recently, the three days at the 54-hole MVC Championships will allow her team more time to catch up with close competitors.

Coach Alexis Mihelich said her first year with the Salukis has been much more successful than she expected. She said she believes what will continue to set her team apart is the momentum they have kept throughout the year.

“We’re not tired, we’re ready and the whole team seems prepared even though it’s late in the season,” Mihelich said. “Everyone on the team wants this more than anything; they’re all really excited.”

For senior golfer Alisha Matthews, her attitude on both the season’s end and her last tournament as a Saluki seem to concur with the momentum her coach described.  Matthews said her confidence in her team this weekend comes from the consistency she has seen during every tournament this year.

“From the first practice, we are always thinking about this meet in the back of our minds,”  Matthews said. “We haven’t been picked above Illinois State in the four years that I’ve been here, so I feel pretty confident.”

For the three graduating seniors on the golf team, the MVC Championships serve as their last chance to show their chops as Salukis.  Mihelich said as the team prepares to right the wrongs that have set them back in the last two tournaments, returning players look to improve over the summer.