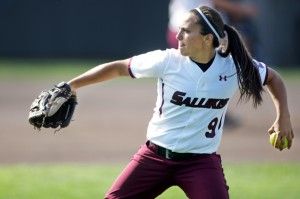 Despite finishing second place in the Missouri Valley Conference Tournament, the Salukis house the most highly regarded player in the league.

Senior outfielder Mallory Duran-Sellers received the MVC Player of the Year honors May 9 at the annual league banquet at the SIU Arena. Duran-Sellers was one of the six Salukis to garner all-conference honors, tied with Creighton for the most selections this season.

SIU hasn’t had a softball player distinguished as MVC Player of the Year since 2008.

“It’s a huge honor, but I was definitely surprised when I got it,” Duran-Sellers said. “There are a lot of well deserving girls with a lot of talent in our conference.  It’s a huge honor that really topped the years I’ve spent here at SIU.”

In addition to her honors, Duran-Sellers also earned the MVC’s Elite 18 award for having the highest GPA in any conference championship.

The senior was also a 2011 Academic All-American.

“She’s just a good kid,” said coach Kerri Blaylock. “She deserved this award, and I think its great that the league coaches thought she deserved it too because I get to see how hard she works everyday and they only get to see it three times a year.”

Duran-Sellers’ teammates and coaches  are not the only ones impressed by her play.

“I don’t know Mallory personally but I feel like I do,” said Jaye Hutcheson, a senior pitcher and first baseman from Northern Iowa. “I’ve definitely heard her name used by our coach more than any other opposing player in the conference. She’s a smart girl and you can definitely tell by the way she plays softball.”

In a loss Saturday to Illinois State in the MVC Championship game at Charlotte West Stadium, Duran-Sellers went 1-for-3 with a walk in her final game for the Salukis. Despite the end to her final season, Duran-Sellers will stay at SIU as a student until December when she is expected to graduate with a bachelor’s degree in English education.