Softball’s series opener against Bulldogs anything but a dog fight 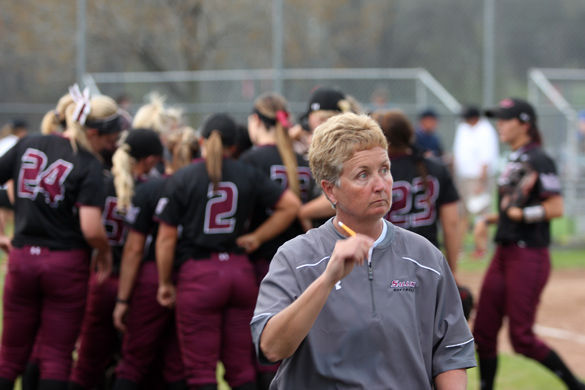 SIU freshman Brianna Jones and Drake sophomore Nicole Newman entered Saturday as the nation’s leader in shutouts and the MVC leader in strikeouts, respectively. Newman rolled to the win after her offense provided her with five runs in the home-half of the second inning.

Drake won 7-1, and despite the scoring, Jones and Newman combined for 11 scoreless half-innings and six 1-2-3 innings.

The Bulldogs scratched across a run thanks to the baserunning of freshman pinch-runner Melissa Schlotzhauer who ran for sophomore designated hitter Kailee Smith. Smith started the inning with a walk then Schlotzhauer stole second, advanced to third on a sacrifice and scored on a fielder’s choice.

Sowa was the MVC Player of the Week last week after leading Drake to a 4-1 record over those seven days. She went 10-for-18 with 14 RBIs, 10 runs, four home runs and two doubles while recording a slugging percentage of 1.333 and on-base percentage of .579.

The Bulldogs added two more runs in the fourth when Frank, the MVC Newcomer of the Week last week, hit a two-run homer to right field.

SIU was able to get a run back in their half of the fifth after sophomore right fielder Jessica Heese led off with a double and later scored on a single from junior catcher Jessa Thomas. The Dawgs continued to threaten, but freshman left fielder Eyrika Brandenburg struck out swinging to end the inning with the bases loaded.

The strikeout was Newman’s ninth of the game and 130th of the season. She finished with one unearned run allowed in seven innings of work. She gave up three hits and three walks while striking out 12. Her strikeout total paces the MVC with 133.

Conversely, Jones — who was named the MVC Pitcher of the Week — finished with seven runs against in six innings of work. She allowed five hits while walking four, fanning three and hitting one. This was the most runs allowed by Jones this season, her previous high was six in a 6-5 loss to Florida Gulf Coast on February 20.

The dog fight for the top spot in the Valley will continue when the Dawgs and Bulldogs play a doubleheader beginning at 11 a.m. Sunday.