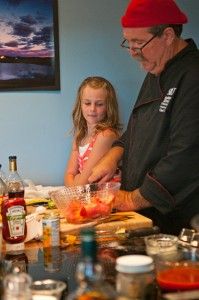 While he may be known as William Connors outside of the kitchen, Chef Bill has fed hungry students in university dining halls for nearly two decades.

The regional flavor Connors, university food service chef, has added to the dining hall menus has made him popular amongst farmers, food enthusiasts, and of course students. Since February, Connors has ventured outside the halls and spread the joy of cooking by teaching a class every Tuesday at Kite Hill Winery in Murphysboro.

With his culinary creations grown and raised in southern Illinois, the chef encourages sustainability through regional food sources and a back-to-basics approach to preparing meals.

“This class is all about slow, real, local food,” he said. “It’s about getting back to the way things were done a long time ago when food was considered more than just sustenance.”

Connors’ classes radiate a feeling similar to a classic family-style dinner, than a course on healthy eating.

“Everyone who comes loves to cook already and if you love cooking you love eating,” said Barbara Bush, co-owner of Kite Hill Winery. “Its very informal and anyone can come out, sometimes we will have 10 people and sometimes we’ll have 20.”

As Connors cooks he explains what he’s doing, why he’s doing it and what ingredients are better to use than others. At the end of the class when the food has been prepared and the sun has gone down in wine country, he serves up his feast to culminate the class.

Dawn Taylor, a teacher at Murphysboro Middle School, said Connors’ cooking class has changed the way she and her children eat, which she said has a direct effect on the way her family feels and communicates with one another.

“This class had made a huge difference within my family, its gotten my kids to want to eat fruits and vegetables like I never could have done before,” she said. ” My nine year old asks for Swiss Chard, that’s something only a nine year old who has been to Connors cooking class would ask for.”

Connors said his greatest accomplishment while in southern Illinois has been his ability to influence students and community members in a positive and healthy way through looking at their food differently.

“When you buy local the money goes back to us instead of companies who mass produce food and make billions of dollars every year,” he said. “I want to help people help themselves through eating the healthy and delicious food grown right here in our very own region.”