Region heats up, dries out 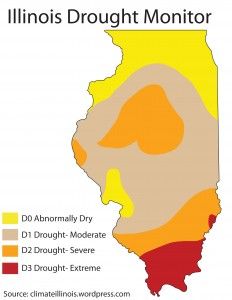 Several months of above-average temperatures and below-average rainfall has left southern Illinois scorched and eager for rain as drought and hotter weather look to continue through July.

The region has been in a drought since late May. The drought status is based on several impacts including an early-season onset of reservoir recession at many water supply lakes in addition to continuing seasonally low water levels in many streams and shallow groundwater resources, said Mary Lamm, a hydrologist with the Paducah Weather Service.

Lamm said a U.S. Drought Monitor for Illinois released June 21 showed 100 percent of the state categorized as being either abnormally dry or with some degree of drought with statewide conditions shown at the worst in southern Illinois.

Robin Smith, a meteorologist with the Paducah Weather Service, said things will only heat up and dry out as the summer continues.

“The forecast for the rest of June and July puts the southern part of Illinois at risk for above-normal temperatures and below-normal precipitation,” he said. “What’s even worse is that the outlook for July through September has an increased chance of higher than normal temperatures with precipitation below or only near its normal levels.”

Smith said an upper level jet flow in the eastern United States has allowed for hotter air to build throughout the mid-west. He said a high-pressure system of weather sitting on top of Illinois is not letting in any rain.

Lindsay McQueen, manager of the Jackson County Farm Bureau, said if rain doesn’t make its way to the area soon, agriculture might suffer past the point of recovery.

“The area has seen a lot of dry seasons in the past years but this one has just seemed to get worse and worse,” she said. “Without spring floods, crops were planted easily and got off to a pretty good start, but when April turned into May and the rains still hadn’t fallen, farmers started to fall on hard times.”

With no rain in sight and even hotter weather to come, Jodi Robinson, director of nurses at the SIU Medical Clinic, said people should remain indoors to avoid falling to the same fate as regional vegetation.

“We see a lot of heat exhaustion and heat stroke this time of year and they are both easily avoided when people use their best judgment when being active outdoors,” she said. “ An increase in sweating, a red face and a pounding feeling in one’s head after physical exertion are all tell tale signs to get out of the heat to avoid potentially fatal consequences.”