DE Poll: How is the budget impasse affecting you? 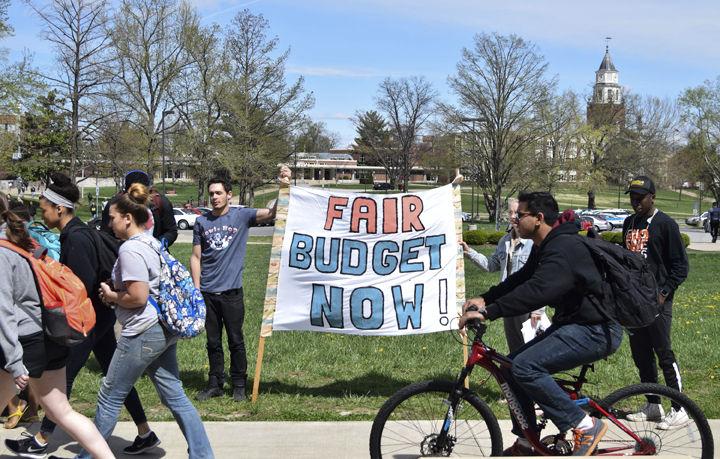 Seventy percent of SIU students think the Illinois budget stalemate has directly affected their university experience, according to a straw poll conducted this month by the Daily Egyptian.

The anonymous poll, conducted April 1 through April 5 collected 970 student responses, many of whom expressed concern for the university’s financial state.

“It has increased the stress levels in my department, leading to more tension and increased negative interactions among faculty, as well as between faculty and students,” one respondent wrote. “It also caused my main professor to retire, and is making recruitment of new students incredibly difficult. It has been a great source of concern and a distraction that has taken away from my educational experience.”

“I’m a graduate student, and I am fearful that my program will be cut or I will not be funded to teach next year,” a student said. “This is distracting and counterproductive to both my student duties (learning, test taking, projects) and my teaching. Graduate school is stressful enough.”

April begins the 10th month without a state budget thanks to a stalemate between Republican Gov. Bruce Rauner and the Democratic legislators, causing many state programs and universities to be affected. State colleges and universities have not received any state money since July 1.

Many students directed their anger toward Rauner.

“Attempts of our governor to cut educational funding as an approach towards [sic] balancing the Illinois budget shows extreme shortsightedness,” a student wrote. “Education is one of the best ways to encourage progress in a variety of industries as well as enhancing economic growth. Clearly governor Rauner doesn’t recognize these benefits.”

Students’ jobs have been affected as well.

“Funding for research has dramatically decreased and led to my paid research position to not be funded like I was promised,” a student wrote. “In turn I have to find a job to cover expenses I have during the school year.”

Of the almost 1,000 students who responded, nearly half said they are or have been Monetary Award Program grant recipients and almost a third of those respondents said they will not be able to attend SIU in the fall without the grant.

“I am a single mother with little income, living with my son and disabled mother,” one woman wrote. “Without this grant, there is no way I will be able to afford college. This grant is vital to my education.”

MAP grants — which are supposed to be state funded — are awarded on a need basis to help students finance their education. The university has not received any money for the grants and has suggested students may have to repay the grants if the budget impasse isn’t resolved.

MORE: Students react to possibly paying back their grant

At least one student said MAP grant funding is not among the most important aspects of the funding shortage.

“With all of the state’s university’s struggles with the budget cuts, the MAP grants should be at the bottom of the priority list,” another said. “There are several things more important. Keep more teachers, and quit letting kids go to school on my income.”

“This state has no money and we’ve gotten comfortable living above our means,” another wrote. “We finally have a chance to restart and set things right before we plummet into a position where the only option is bankruptcy. As tough and sad as it might be, it is necessary to take a new approach.”

What the university does know is that their new spending approach will take even more hits.

One student said, “It has been very discouraging to come to campus every day with the thought in mind that my program, the classes I need and want to take, and the faculty in my program could be cut or significantly reduced by next fall.”

“I was born in a different country and came to the United States to pursue ‘The American Dream’ and receive an education to one day provide my future family what my family could not provide me. My parents gave up vacations, the luxury of new vehicles, and many more family events to be able to provide the little currency they could to pay for education…” another said. “Budget cuts for education should be the last resort.”

Many of the 300 students who commented said they felt as if the state government did not care about their education, and said they no longer plan to stay in Illinois long term.

“Taking money away from education is like burning your house down to keep warm. In the short term it may work, but in the long term you’ll end up with an uneducated populace,” another said.

The unscientific poll was conducted on SurveyMonkey thanks to funding from the Paul Simon Public Policy Insitute.