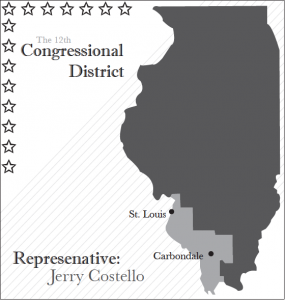 The Democratic nominee for Illinois’ 12th Congressional District will visit the campus today for Pizza and Politics.

Bill Enyart, D-Belleville, will be the first of three candidates to visit the lobby of the Paul Simon Public Policy Institute. David Yepsen, director of the institute, said Pizza and Politics is a way for students to get acquainted with and form opinions on the district’s three congressional hopefuls.

This a good way for students to meet the candidates early and decide whether they would like to help out with any of their campaigns, Yepsen said.

Enyart, who became the democratic nominee in early July, was voted in unanimously after primary winner Brad Harriman dropped out of the race with health issues.

Retired Maj. Gen. William L. Enyart of the Illinois National Guard is an SIUC Law School alumnus who served as a member of the governor’s cabinet as the principal adviser on military matters. His campaign office did not return phone calls seeking comment by press time.

“As an alumnus, SIU and southern Illinois are very close to my heart,” Enyart said. “My youngest son, Alex, is in his third year of law school at SIU but is taking the semester off to help out with the campaign.”

The three candidates look to fill the seat of Jerry Costello, D-East St. Louis, who announced last fall that he would not seek re-election in the midst of his 12th term.

Nominee Jason Plummer, R-O’Fallon, is the vice president at R.P. Lumber Company and serves as an intelligence officer in the Navy Reserves. Plummer is scheduled to visit the university at 5 p.m. Sept. 13.

Candidate Paula Bradshaw, I-Carbondale, made her way onto the Green Party ballot after a challenge to her petitions was recently dropped. She is an emergency room nurse at Memorial Hospital of Carbondale as well as a political activist, and she will be the last candidate in the series to visit the institute Sept. 18.

Yepsen said the event is open to students, faculty and staff with an RSVP requested but not required. Each event will last an hour with Yepsen’s opening remarks to follow a question-and-answer session between the nominees and audience members.