Students adjust to Ramadan in US 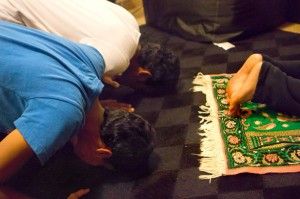 In observance of the holiest month of their religion, three new roommates spent the last month trying to perfect a traditional meal made in Saudi Arabia.

Abdulmajeed Alotaibi, a senior from Riyadh, Saudi Arabia, studying medical imaging, said he has called his mother for help on how to cook Kabsa, a chicken and rice meal served on a large platter that they eat every night when the fast of Ramadan is broken.

Alotaibi, Mohammad Alradadi and Bandar Bin Osfur observed their first Ramadan in Carbondale from July 19 to Sunday, the last day of fasting known as Eid al-Fitr.

During Ramadan — the ninth month on the Islamic calendar and one of the five pillars of Islam — practicing Muslims fast from dawn to dusk. During the observance, Muslim people read the entire Quran — the Muslim holy book — in parts everyday until it is finished while they refrain from eating, drinking and sex.

Alotaibi said he has no family in the United States, so people he meets through the Muslim Center and the Center for English as a Second Language become his family.

As with any religion, though, people want to be around others who share their values, said Imam Abdul Haqq, resident imam at the Carbondale Muslim Center/Masjid An-Nur.

“We don’t have a choice of who our family members are, and you are born into a certain environment, a certain culture and a certain language, but what religion a person chooses to follow … another kinship develops,” he said. “When you are away from home, you miss family, you miss smells, familiar sights and your surroundings, but it goes a long way to be able to be among those who share your religious faith and values.”

He said he works in his office in the United States and is more active at night, which is normal in his country and unusual in the US.

“Here the Muslim community becomes your extended family, and you need that support going through this,” AlThawadi said. “It somehow does have new meaning here.”

The association’s membership has increased to 200 students since he came to Carbondale in 2006, which has made the observance easier, he said.

Haqq said many different countries are represented in Carbondale, which speaks for the university’s work to attract people from all over the world.

“Some (students’) first experience in the country are in the mosque and in the Center for English as a Second Language,” he said.

Every weekend during Ramadan, different groups or families provided the meal, called Iftar, to break the fast with anywhere from 500-600 attendees at the Muslim Center. AlThawadi said another difference of observing Ramadan in the U.S. was the amount of time devoted to the observance.

Iftar is the centerpiece of every day in Saudi Arabia, and AlThawadi said sometimes four or five hours are spent preparing the meal.

“Here we don’t have the luxury of time, so you miss that variety of food,” he said.

People from different countries provided different meals, which AlThawadi said was an opportunity to share cultures.

While people from different countries may have different cultural traditions, all practicing Muslims follow the same guidelines. Alotaibi said the fast’s main purpose is to remember those who are always hungry. Many Muslim people try to help those less fortunate than them during Ramadan by providing them with food and donating to charities.

Prayer is increased during Ramadan. Bin Osfur, a freshman from Riyadh, Saudi Arabia, said he goes to the mosque once a week in addition to the five daily prayers. He said the additional praying is meant to bring Muslims closer to God.