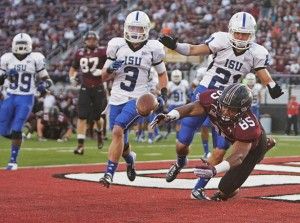 The SIU football team came out on the losing side of a defensive battle Saturday as it fell 24-3 to Indiana State University.

The two teams were each held to 255 yards of total offense in the contest.

Despite the lack of an offensive presence throughout the game, the Salukis (2-3, 1-1) moved the ball well early on as a 15-yard swing pass from junior quarterback Kory Faulkner to junior running back Mika’il McCall followed by a 5-yard out to sophomore tight end MyCole Pruitt put the team in Sycamore territory on its first drive. Junior receiver John Lantz then caught a pass that tipped off of Pruitt’s hands for a 33-yard gain and first and goal.

When the drive stalled, freshman kicker Austin Johnson made the Salukis’ first field goal of the season with just less than 10 minutes to play in the first quarter to give the Salukis a 3-0 advantage.

SIU entered the game determined to stop Indiana State’s Shakir Bell. The junior running back sits second in the Missouri Valley Football Conference in rushing at 164.8 yards per game. Bell carried the ball four times for 24 yards on the Sycamores’ first drive, and he eclipsed the 3,000- yard career mark in the process. Indiana State was then forced to punt as a pass attempt on third and 4 was batted down by senior safety Carlton Lewis.

Bell finished the game with 33 carries for 160 yards and two touchdowns.

“The focal point of their offense is Bell, so our motive is to play the run up front,” senior defensive end Eze Obiora said after the game. “The sun’s going to come up tomorrow. We’ve got to watch the film and get better.”

Early in the second quarter, Indiana State quarterback Mike Perish found receiver Tanner Riley on the sideline twice to get a pair of first downs. After a 26-yard run by Bell put the Sycamores in the red zone for the first time, Perish play-actioned to Bell and went back to Riley for the score and 7-3 advantage.

Indiana State coach Trent Miles said both teams had to fight for every yard in the contest.

“My hat’s off to Southern Illinois,” Miles said. “They are a physical team. It was just one of those good old-fashioned Missouri Valley Conference slugfests. Those were two really good defenses out there today.”

It was clear that the defenses had control of the game as the second half began. Both teams were forced to punt on every drive of the third quarter, and SIU didn’t achieve a first down until the 5:41 mark of the third.

“It turned into a defensive battle the second and third quarter, where both teams were really struggling to move the ball,” SIU coach Dale Lennon said.

The Saluki defense was given a steady dose of Bell in the final quarter, and the running back punched in a touchdown from the 1-yard line after carries for 8 and 11 yards to give the Sycamores at 14-3 advantage.

Faulkner was picked off — his third interception of the game — on the Saluki drive following the score, and Bell scored again to put Indiana State up 21-3 a few plays later.

Although Faulkner struggled throughout the contest as he finished with 137 yards on 12 of 24 pass attempts, Lennon scoffed at the idea of a quarterback change at the post game press conference.

“Kory is our quarterback,” he said. “He ended up forcing some passes. Some of that ended up being that he didn’t have a lot of time with the protection. We need to provide Kory some time.”

The Salukis travel to Normal to play Illinois State Saturday. Kickoff is scheduled for 1 p.m.