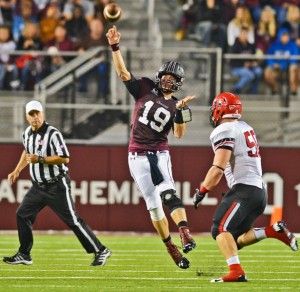 At the conclusion of non-conference play, college football teams hope to have established an identity.

The rigors of a conference season can take a toll, but the knowledge of where a team’s strengths and weaknesses reside can be a major benefactor down the stretch.

This season the Salukis have been labeled several things: disappointing in a 49-28 loss to Eastern Illinois University to start the season, promising in a 30-14 losing effort against Football Bowl Subdivison opponent Miami University and exciting in a 35-14 Southeast Missouri State University defeat Saturday. It is safe to say the Saluki faithfuls have seen the team’s highs and lows.

As the SIU football team begins conference play Saturday against Missouri State University, there are several points that have shown to be true of the team.

Quarterback Kory Faulkner can run the offense. Faulkner leads the Missouri Valley Football Conference with 875 yards through the air, an average of 290.7 yards per game. In Saturday’s contest, Faulkner passed for 384 yards and three touchdowns.

Following the game, coach Dale Lennon said Faulkner’s development is a sign of his confidence in his receivers and of the junior becoming more comfortable in the offense. For the Salukis to continue the success of Saturday’s game

Faulkner must continue to distribute the ball but cut back on turnovers. Faulkner ranks second in the MVFC in interceptions, with five.

Tight end MyCole Pruitt can be Faulkner’s go-to guy. Prior to the start of the season, some questioned if the Salukis could succeed with a tight end as their leading receiver. Pruitt has shown an ability to make a play on every ball thrown his way, and has 19 catches on the year, two behind Illinois State University’s Tyrone Walker for most in the conference. The 6’3″ 247-pound sophomore has the athleticism to grab jump balls and the power to fight through tackles for extra yards.

Sophomore running back Mika’il McCall has the ability to carry the load in the ground game, but fellow back Steven Strother might be just as important.

McCall, a powerfully fast transfer from the University of Iowa, has already begun to make his case for MVFC newcomer of the year as he leads the conference in touchdowns with seven. But Strother has proven to be the perfect lightning to McCall’s thunder. The two have split carries almost evenly — McCall has had 43, Strother, 41 — but the shifty senior Strother is a viable pace change for the offense, as he has caught nine passes out of the backfield for the Salukis.

The Salukis’ defensive line can dominate a football game. Defensive coordinator Bubba Schweigert loves to blitz, and the team has seen success getting pressure on the opposing quarterback. SIU ranks third in the conference in sacks, with eight, and has been able to get a good portion of tackles from the defensive linemen. Senior ends Ken Boatright and Eze Obiora account for 33 of the team’s tackles. Obiora leads the conference with four sacks.

The defense has shown it can lock down playmakers. After a rough start in the season opener, when the secondary allowed seven touchdowns through the air, the Saluki defense has come together. In the season’s second week, of the season, the defense was much improve, and allowed Miami receiver Nick Harwell — whom Lennon called an “NFL talent” — only three catches for 21 yards.

To compare, Harwell had eight grabs for 120 yards against Ohio State University the week prior. The defense had success again Saturday, allowing only 14 points to SEMO.

The Salukis’ true tests Salukis are yet to come, as some have deemed the MVFC the “SEC of the FCS,” referring to the dominant Southeastern Conference of the FBS, which has accounted for the past six national championships. Five teams MVFC tams are ranked in the top 25 of the Football Championship Series. The Salukis will have their work cut out for them, but they know who they can depend on to do the job.