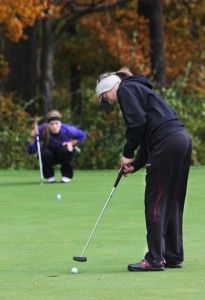 Rushing beat her career-best by five strokes with a total score of 217, which was four strokes better than the second-place finisher at the Blue Raider Invitational in Murfreesboro, Tenn.

“Cassie is the hardest worker on the team,” coach Alexis Mihelich said. “She played three consistent rounds and came out on top. The best part for us is that her best golf is still in front of her.”

Rushing shot a 72 in tournament’s first and second round, and she was tied for third before the third round Tuesday where she shot a 73. Rushing is the second Saluki to win a title this season after freshman Amy Lee won the SIUE Intercollegiate Sept. 25. Sheis also the seventh golfer to win an individual title under Mihelich.

The team shot a 298 in the first round, which tied it for first. Scores of 300 and 310 in the second and third round, respectively, put the team in fourth and 44 over par.

The team will play in its last fall season tournament Monday and Tuesday at the Braun Intercollegiate in Boonville, Ind.