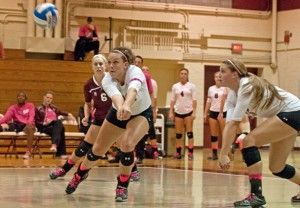 The Salukis swept conference competitor Evansville with an energetic and efficient offense Friday.

The match was the team’s annual Dig for the Cure event, where the players wore pink socks and headbands to raise Breast Cancer awareness. Survivors were recognized during the match, which was sponsored by Southern Illinois Healthcare.

“You have to give the girls credit,” coach Justin Ingram said. “They were incredibly focused tonight, and really capitalized on all the small opportunities they were given.”

Mayes killed 16 of her 19 attempts and posted a career-high .842 percentage, which is third best in single-match SIU history.

“She was unbelievable,” Ingram said. “With that many kills on that many attempts, you’re just not going to see that often.”

The Salukis took the second set as easily as the first with another team hitting percentage higher than .400.

Evansville came within four points twice in the third set, only for SIU to answer with a four-point run with kills from Mayes and junior outside hitter Jessica Whitehead and two blocks from freshman middle blocker Taylor Pippen.

“It’s a hard conference to just jump up and travel like that, but everybody does it,” Ingram said. “That’s just the nature of the beast.”