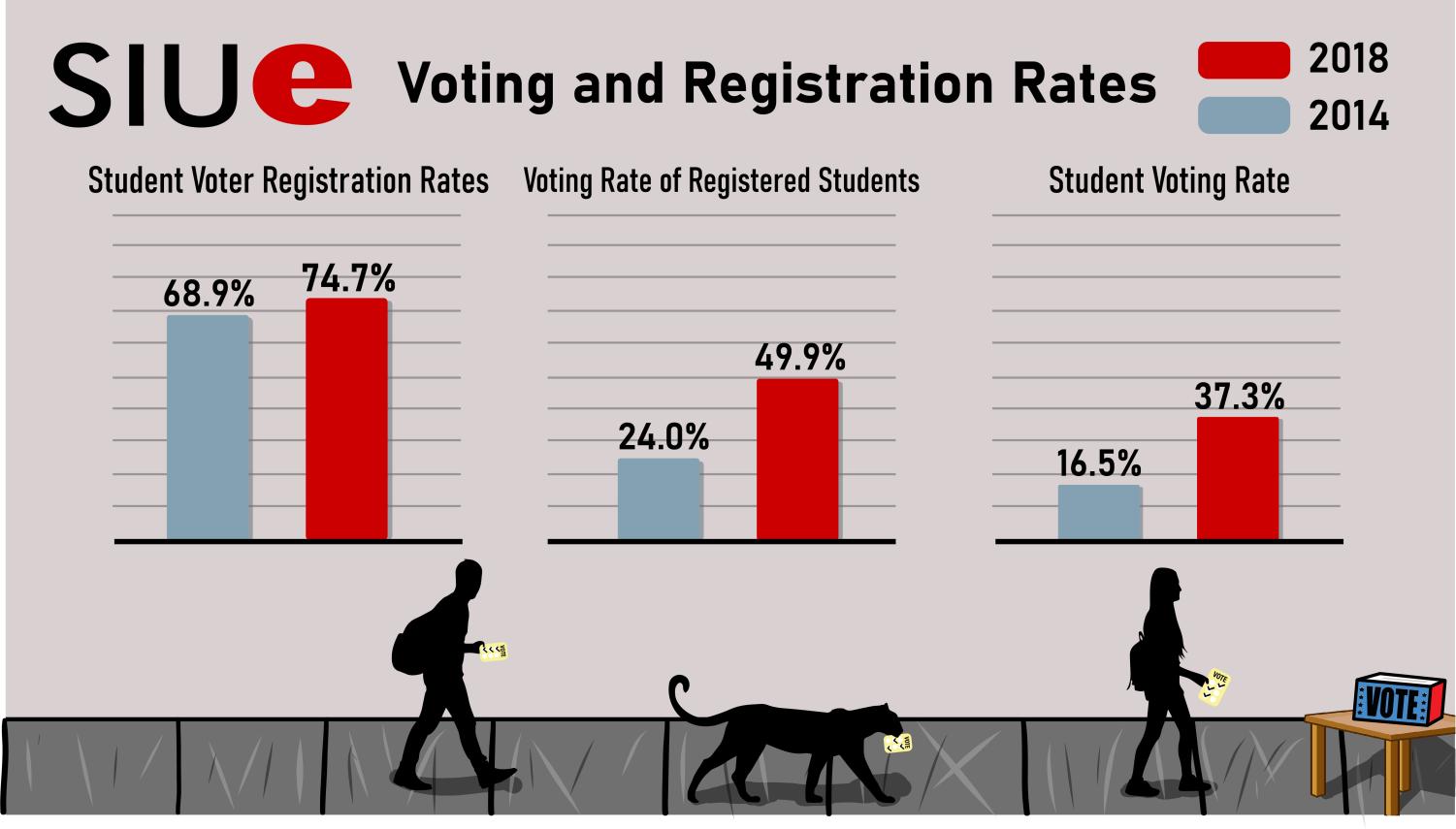 A torrent of students cram through the hallway near the north entrance of the Student Center, the din of conversation nearly drowning out the generic pop music sounding from the speakers above. Nearby, poised to take full advantage of the lunch rush, sit a handful of people with laptops, forms, QR codes and candy. They cheerfully greet the hurried Salukis one group at a time:

“Hey ladies, are you registered to vote?”

Every now and then, they manage to break students away from the herd, deftly guiding them through websites or paperwork. In less than a few minutes, a brand new Illinois voter is on the books.

Thanks to the efforts of the College Democrats RSO as well as the student and Carbondale branches of the NAACP (National Association for the Advancement of Colored People), an estimated 100 to 150 students registered to vote on Tuesday. College Democrats president Vivian Walker helped lead the voter drive which took place between 10 a.m. and 2 p.m. with student and community volunteers working nonstop to make a difference.

“So many people come up to the table because they just have questions about, you know, ‘I did this but I’m not sure if I can vote here or there.’ They just have questions that it’s hard to find that information and being able to just have someone they can walk up to and ask that question to is, I think, really helpful. That’s probably more of what we’re doing today,” Walker said.

As Nov. 8 and the midterm elections approach, there couldn’t be a better time for students to get involved in politics. Despite recent increases, SIUs student voter participation statistics from previous years certainly show room for improvement. The National Study of Learning, Voting and Engagement, is a study dedicated to increasing student and school engagement in politics. Its numbers show SIU Edwardsville’s total voting rate was 37.3% in 2018, 1.8% lower than the national average. The Daily Egyptian tried to acquire voter registration data for SIU Carbondale, but the administration did not release the information in time for publication.

“I feel like so many people are discouraged about it and I wanna be able to get out there and show young people that this is a really important part of the world that we live in,” Walker said.  “Casting your vote – it changes things. I feel a lot of people are really disillusioned now by politics and it’s really discouraging. Especially politicians seem to have lost their professionalism now. That doesn’t appeal to very many people. They want to be able to vote for people that they can look up to.”

Last week, Chip Markel’s campaign manager reached out to the College Democrats directly to ask them to participate in his campaign. This election cycle brings lots of challenges for Democrats like Markel, who is not only running against a Republican incumbent Mike Bost, but doing so in a historically red Southern Illinois.

Still, the importance of Carbondale as an oasis of blue isn’t to be underestimated. Some of the biggest issues of the century are up for debate in congress currently. The midterm elections also include the race for the governorship in Illinois

“As a woman following the summer’s events of Roe v. Wade I think it’s especially important to be registered to vote now, I think it [the voter registration drive] helps a lot with community outreach and making sure everyone’s voices are heard,” said Natalie Rossi, a volunteer at the event.

Elections are also coming up on the tail end of the largest Federal student debt relief effort in recent years, Biden’s partial student loan forgiveness plan, with bills such as the Income-Driven Student Loan Forgiveness Act in the works to forgive even more debt.

Still, many students remain indifferent or even unaware of elections. Walker says there were many students that needed convincing.

“I said, ‘oh, well, we can register you right now.’ And she goes, ‘Why should I vote?’ And just looked at me and was like, ‘Why would I do that? You know, like, what’s the point?’ And she wasn’t the only one to ask questions along those lines, but that was the most point blank. Like, ‘tell me why I should.’ And to be honest, people ask that question because they… genuinely want an answer. They want to know what’s on what’s important about the ballot, why should I get out there and cast my vote? And we have different answers for different people.”

As is especially obvious watching the majority of students pass the voting registration tables by, students’ lives are busy, and not just in the sense that they’ve got friends to have lunch with, and classes to go to. A surprising number of students are actually already registered to vote, 74.7% as of 2018,  in fact. 74.7 % of students at SIU Edwardsville were registered to vote, but less than half of those registered actually voted in 2018. Even that figure is a dramatic increase from 2014, when only 24% of registered student voters cast a ballot. Could it be that students are so alienated by the implacable movements of federal politics that they think their votes make no difference? Or are there other, more sinister reasons?

“I think it’s systemic, I think there’s a lot of barriers to voting, especially in minority communities, whether it’s polling places that are really isolated from towns and districts or really long lines or, you know, state specific laws that kind of bar voting whether that’s voter ID laws or anything like that,” she said. “I think that it’s a systemic thing and I think that it’s intentional.”

Recent increases in voter turnout are actually because young people and minorities are becoming more represented in politics by figures such as Rep..Alexandria Ocasio-Cortez (D-New York), Rossi said.

According to SIU NAACP Vice President Jeremiah Denham, what students need is leadership and a chance to express themselves freely.

“As a community we need to know what is right and what is wrong, so for us to have the opportunity to vote – we didn’t have the right to vote at first so I think it is a big change and I think more colored people are coming out of their shell because they want to make a change and a change needs to happen,” he said. “I’m glad to say I’m a part of an organization that can push that change out to happen because it needs to happen.”

When it comes to voting, students need roots and they need the ability to express themselves. Everything that a person needs to engage in a healthy democracy can start right here at SIU, where communities like the College Democrats, the NAACP, and the Paul Simon Public Policy institute work tirelessly to provide students with a voice and a community to grow it in.

“When it’s time to vote, I feel like professors should be saying it, TAs, students that know about voting should be saying it to one another, restaurants should, everywhere around that you can go people should be encouraged that they have a right to vote,” Denham said.