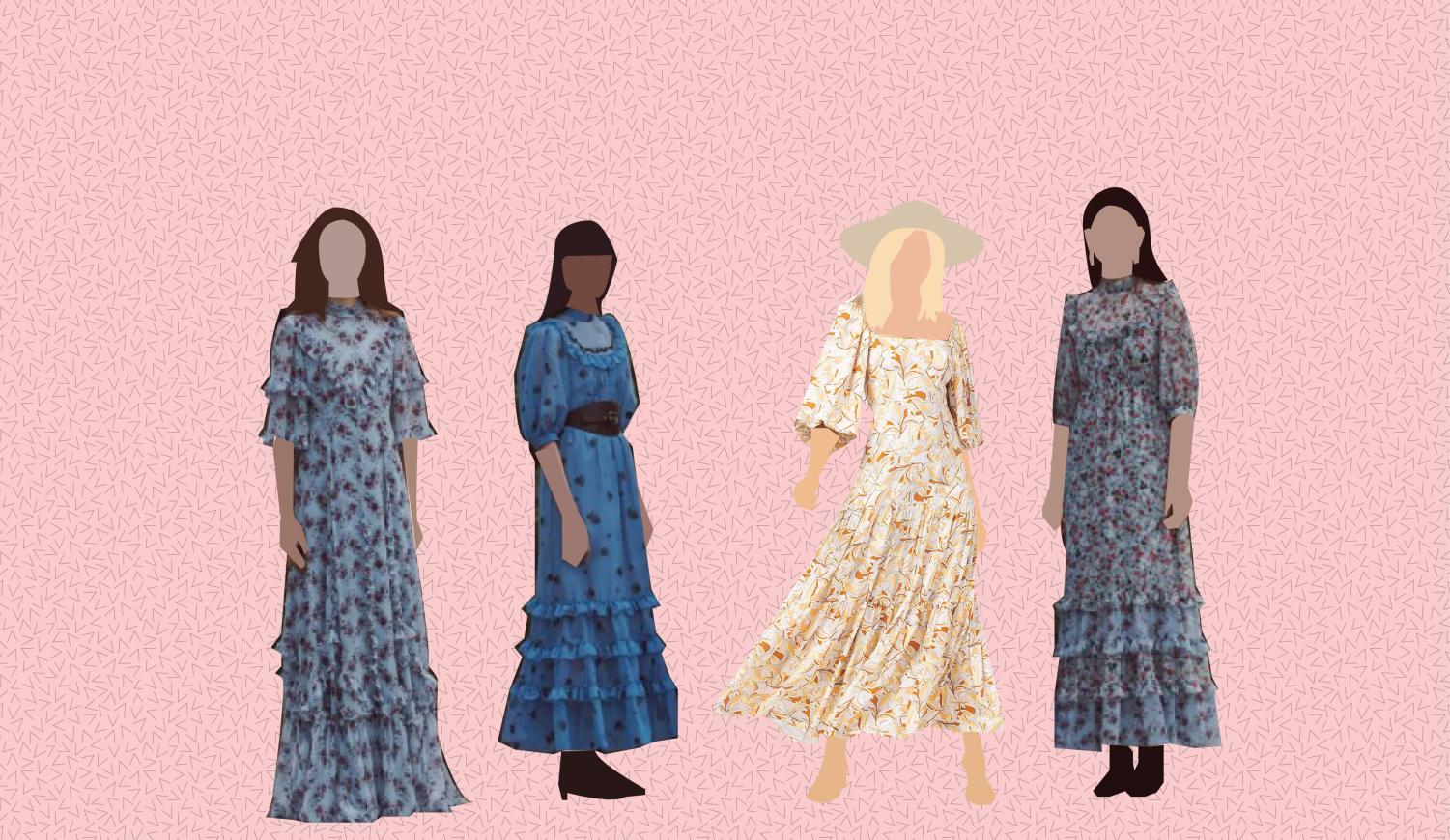 Target has been making us look like a Morman cult since 2018, and I am finally ready to speak about it. The prairie dress has been coming in and out of style for decades, but in recent years it has become more of a staple in closets across the globe, whether the consumer really chose so or not.

While sketching up some designs for class, I got completely in the zone. As a designer, there is no telling where my mind and hands will take me when I am doing what I love the most.

Sketching away at my oversized notepad, I whipped up quick designs to see what the vibe would be for my mini line that is to be finished by April. One by one, I drew out the garments and colored them in, with little attention to what I was creating. After getting a rough idea of what every outfit and ensemble will look like, I laid them all out on the table and stepped back. I noticed something quite worrisome but also a bit humorous to me, they all looked like Laura Ingalls.

Sometime in the late 1960s during the free love movement, instead of conforming to the modern fashions of the time, hippies took inspiration from the past and began wearing prairie dresses and popularizing them among younger age demographics. People across America were going ape for anything that might have resembled a bit of Americana in all aspects of their lives.

At this time there was a transition from the sleek plastic feel of the 1960s, to a more earthy and natural feeling that seemed to linger on through the 1970s. With the growth of more natural looks and an excess of excitement for the United States bicentennial, western american early life aesthetics took off.

In 1969, the Gunne Sax dress was popularized and produced by the famous and fabulous late designer Jessica McClintock after she made a low investment with the company, and eventually bought it out.

The name comes from a mix of words, using the term “gunny sack” which is essentially an inexpensive bag usually made of “tow” textiles such as jute, and combining it with the word sexy. Many women that lived in southern states refer to an uglier dress in their closet as a gunny sack, implying that it’s cheap and not exactly pleasing to the eye, yet useful nonetheless. Making a conglomeration of these two words that mean totally opposite things implies that any woman can wear an ugly dress and still make it sexy.

With the great jumps in patriotism at the time, even postwar, and lots of influence from cinema and the hit television drama “Little House on the Prairie”, women were dressing in apron fronts, smocks with frills, and even bonnets again. McClintock proceeded to design and produce gobs of dresses throughout the 70s, both formal and everyday wear.

That was 1969, just over a half century ago, and we are already making our way back to this style. Actually, let me reiterate that; We already made our way back to that style in 2018, and somehow we are still lingering dressed like we should be barefoot tripping on psychedelics at Woodstock.

Observed in the past four years, we have seen such an influx of this 1970s aesthetics obsession, right down to the Farrah Fawcett layered hair and bangs, and Target has been quick to keep us bountiful in these looks. Except the fact that the designs are downright atrocious.

I hate that it is 2022 and that I can walk into Target and see a dress that would have hung in the exact same position almost half a decade ago, and the silhouettes and necklines are more than likely going to be the exact same. Gunne Sax prairie dresses are in, the Target prairie dresses are, dare I say, out. This could be attributed to having to meet a more broad market and appease all body types, but that shouldn’t matter at all.

The big thing that designers for Target clothing brands are missing is the sexy aspect of the dresses. Their designs are both uncomfortable to wear, but also to look at. Instead of creating better designs over the years, we are still getting bombarded with modest dresses that are an uncanny resemblance to the dresses of the women of the Fundamentalist Church of Latter Day Saints cult governed by the false prophet Warren Jeffs.

People want to look like Mama Cass in her shapeless prairie dresses, not Michelle Duggar of 19 kids and counting. If we are catering to the general public, are we assuming that the general public is mostly following some sort of modesty rule?

Based on the other half of the racks in Target’s oh-so-inclusive clothing section, they aren’t. I mean, you hold up a tube top now that only called for half a quarter of a yard of fabric, and when you try it on, it literally only covers your nipples. So why is there no median? Why do we have to pick between Handmaid’s Tale and Euphoria aesthetics?

This wouldn’t be so distressing if fast fashion didn’t screw up the cycles of fashions, making trends and fads go in and out quicker and quicker, making it so hard for designers to get a real feel of how the next season will look. Target probably thinks that we love what we are given to choose from because we continue to buy it, and wear it until it falls apart a few months later and it’s time to go and buy another. We want quality clothing and good designs at a decent price, but at this stage in capitalism, you better just grin and bear it.

We asked for “Gunne Sax” ensembles, and they gave us nothing but “Gunny Sacks”, a bunch of ugly dresses that serve a purpose until they fall apart.