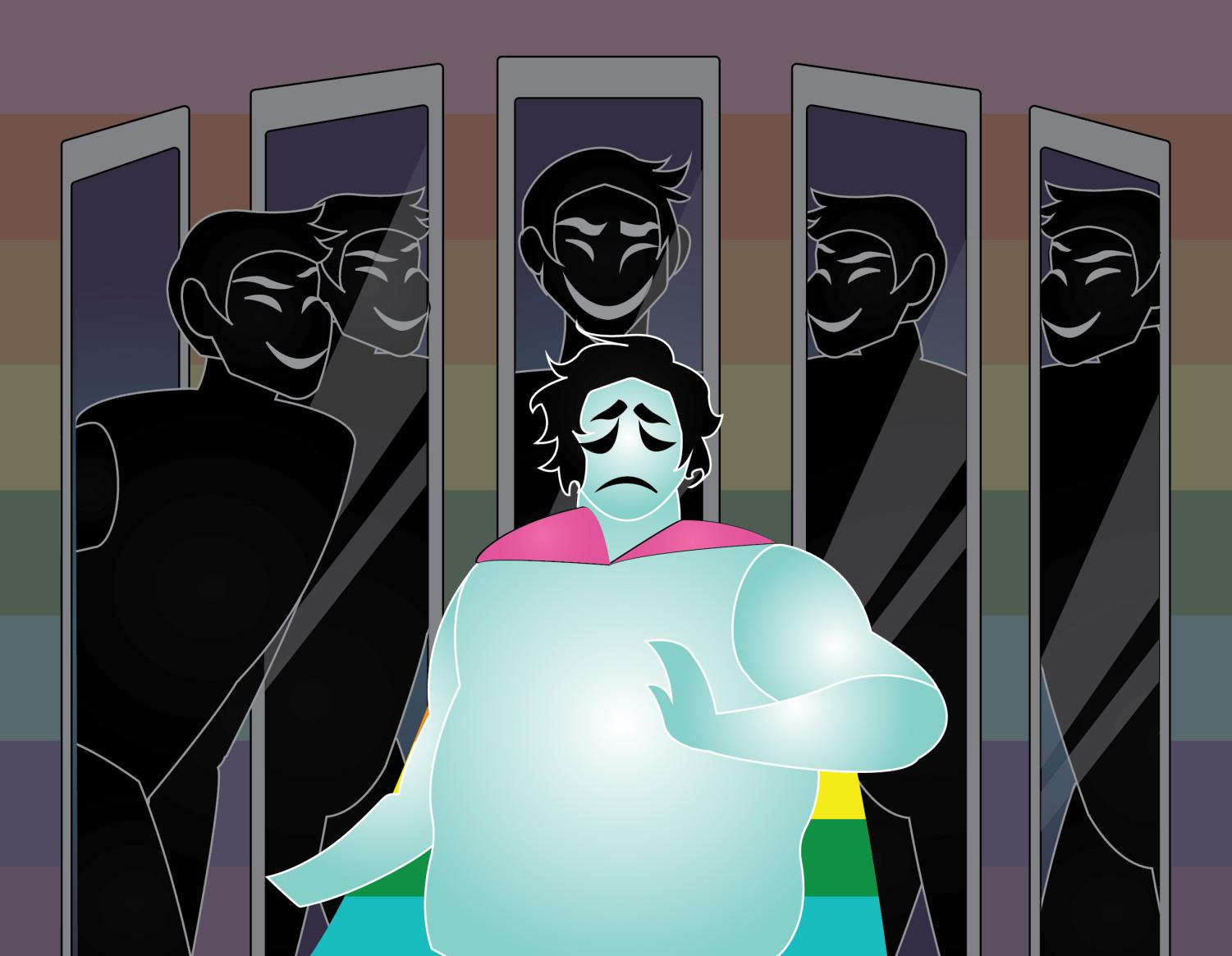 Staring at the scale that seems to be calling my name, I huffed and stood up and walked its way. I chucked out my own scale years ago, but while visiting a friend the other day, I thought perhaps that I would check to see what my stats were. Stepping onto the plate of doom, I watched the numbers zoom upwards. Like stepping foot on a landmine, standing still for what seemed like an eternity, in agony waiting for the bomb to go off.  A number in blood red flashed across the little screen and read my weight aloud to the room of my lonesome. Shushing the little robot I muttered to the silent bathroom “Oh, big whoop” as I exited.

The person I was four years ago would be so bored of who I am now. He would make fun of how I talk, dress, and act, but most of all he would be confused on why I don’t fit all of his good jeans. Being a little gay boy that came out during the fast pace years of Tumblr and YouTube, of course I had a terrible outlook on my own self appearance. I was watching girls with swoopy bangs talk about their size double zero low rise jeans and belly button rings while I sat in cargo shorts and an Abercrombie and Fitch shirt that was just a bit too tight.

My eighth grade class had only 20 people in it, and most of the girls weren’t even allowed to wear makeup or dye their hair. Although influenced by outside cultural standards and aesthetics, I was still rather a bit sheltered. The sad part is, my mother was the most lenient of them all. At that time in my life, I recall thinking about how I was the most mature one of the class.

High School rolled around, and I could feel change on the horizon, but did I realize how much?

Terribly confident for being a part time pubescent, I entered into the domain of public education thinking “well at least I wont be the only gay kid anymore,” to which I would be right. A handful of homosexuals walked the halls of Herrin High, and I thought peerhaps I would finally have a friend or a confidant that would be like me, and not just some girl asking me if she looked cute in her khaki skirt. I couldn’t have been more wrong.

Ice tipped blonde hair and deep set collar bones, with a glare that would send chills down your spine, every gay kid here looks… the same? I had been out since fifth grade, and I had experienced my fair share with the gay community via social media (thanks Kik), but at least there was some diversity. Around these parts, if you dont fall under the category of blonde, gay, and skinny, you are not going to be accepted for who you are.

Let me state this now: I have no issue with what people of the world would call “twinks.” A twink (gay slang) is someone of slim stature, usually lacking body hair, with a slight femme twang to them. I have many friends who would be classified as one, and I could say that for a brief moment in my time, I would have been grouped with them. Femme gay men men are always the first to be picked on for not being manly enough by society.

I was very fortunate not to have been bullied in highschool except for by other LGBTQ+ community members, whether they were out of the closet, or in the depths of it. It is hard being the one rather frumpy and femme kid surrounded by a millions guys that look like Kenn dolls. I wasn’t, am still not, much of anyone’s type. Having only small things with boys that would rather me not tell anyone that we see each other and delete their messages was more normal for me than anything else.

A stigma among homosexuals is that when a couple is together, they somehow look alike. This of course is noted among straight cis couples as well, but it is far more noticeable when the couple is of the same gender, and it usually is always the tiny twinks that go for their own doppelgangers. My girlfriends and I have coined a label for this phenomenon, naming it after a boy that we all know that somehow looks as if he shares DNA with every guy he courts.

You could accuse vanity for this strange occurrence, and that would aid to the real root problem: aesthetics and the need for male accessories.

Aesthetics can be oh so important to oneself’s identity, and finding who you are as a person means finding out what you like and do not like. The only way to figure out what taste you have is by experimenting, but that usually isn’t the case in these situations. Aesthetics can be found on their own, but in the gay community, it is far more common to have them pressed upon you.

A few years ago, I only exclusively wore 1960s golf pants, most of which I inherited from my grandpa’s dead cousin. It was 2017, and everyone owned a “Golden Girls” shirt and a handful of funky pants. A good three inches from my ankle, I walked around plenty of places looking as if I was preparing for a flood. Thanks to the honest words of many friends and a good long look in the mirror, I no longer wear these trousers.

I wanted to be trendy, but most desperately, I craved to fit in. I didn’t care about straight fashions, as they did not apply to me, but I knew that it was easier to wear a flannel with jean shorts and my birkenstocks and be a quirky cookie cutter homo, rather than the guy that only wears flats three times a week. It is widely understood that fitting in is much easier than standing out, and being subjected to criticism and bullying is not worth the trouble sometimes.

The only time I ever really subjected with rudeness in my years of younger academia was by other gay people, shaming me for being just a little too kooky for them. I didn’t fit their aesthetics. We have moved into a period where these men pick men that resemble not only themselves, but what they want their aesthetics to be portrayed as online. They do it as a cry for attention in a hallway full of mirrors.

If the perfect guy doesn’t visually match the look they are going for style wise, somehow two weeks into their relationship, that ideal man will be blonde and wearing baggy clothes while making a pouty face for thousands of followers in their boyfriends third post of the day.

The mute button on Instagram is a gift from heaven when it comes to having self image issues. You cannot scroll through your feed without seeing every single person that you despise, but refuse to unfollow because it would seem quite tasteless. Instead of wallowing in the annoyance of their constant and vain postings, you can just shut them off.

I will be the first to call myself out; this opinion is rooted in jealousy and insecurities. It’s not my fault that I don’t look like them physically, but I could put a little more energy into my appearance. It is already a struggle to get up in the mornings, but adding on a whole routine of intense pampering to make sure that I am looking “dewy” and youthful makes me want to do drastic things. Perfection is only achieved through practice, and if I haven’t had enough practice, how have they?

Twinks are the lucky ones. Born to be pretty, and treated like prince’s among the masses. Almost always guaranteed a seat at the table among the rest, and they know it. Is that where the attitude comes from? I know where mine is rooted, but what’s their excuse?