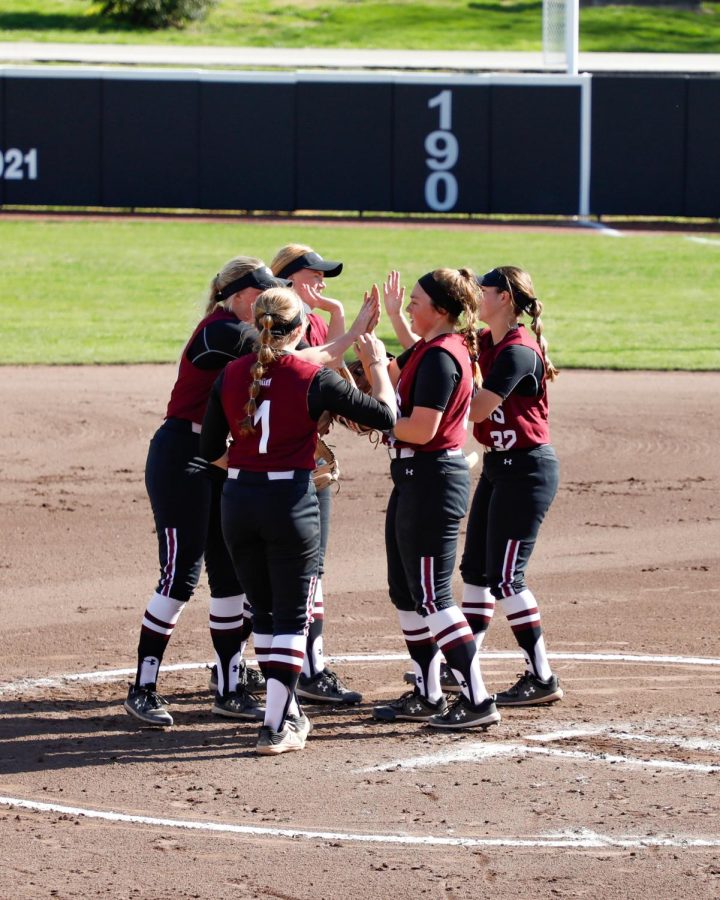 The softball team high fives each other after a huddle on Wednesday, April 6, 2022 at Charlotte West Stadium in Carbondale, Ill.

The SIU Softball team traveled over to Bradley for a three-game set against the Braves this weekend. The series could have gone better for the Salukis however, as they dropped all three games after earning significant leads in each of them.

The Salukis were highlighted by performances from graduate student Jenny Jansen, who tallied three total rbis across the three game set, after going four for ten at the plate. Sophomore pitcher Madi Eberle got the starts in games two and three of the set, pitching a total of 10.1 innings, gave up seven earned runs, 12 total hits, while striking out nine. Junior pitcher Sarah Harness started in game one of the series. She pitched 7.1 innings, gave up five earned runs and nine hits while striking out five and walking three.

Game one started out as a pitcher’s dual, with only one run coming to the plate for SIU through five innings. In the sixth, SIU struck some more runs to add to their lead, making it 4-0 heading into the seventh. Then, Bradley strung together four hits in the inning to clear the lead for SIU and tie the game up and head into extras at 4-4. In extras, it only took a walk, an error, and a single for the Braves to score the winning run and walk-off the Salukis.

Game two started off with yet another Saluki lead after a two-rbi single by senior Sidney Sikes in the first. A run scored for Bradley in the bottom of the inning making for a 2-1 game. It was another pitchers duel from there as the board was filled with zeros until the bottom of the sixth where Bradley plated two more runs off a homer to take the 3-2 lead heading into the final three outs. The Braves closed it out and SIU went down in game two with a 3-2 final.

Game three started yet again with multiple runs being scored before Bradley even recorded a third out. Jansen notched a bases clearing double to score three runs for SIU and give them another early lead. The Braves gained one back in the second after a leadoff homer started the inning off. Later in the fourth a fielder’s choice gave SIU their three-run lead back after sophomore Rylie Hamilton reached home plate.

But Bradley was itching to come back in this one. In the fifth, Bradley tied things up after Eberle gave up a three run homer to make it 4-all. The game was about to go into extras, but a fielding error by Elizabeth Warwick gave Bradley the winning run and the sweep over SIU with a 5-4 final.

The Salukis will try to turn things around once with their final game of the road trip when they face Murray State on Wednesday. That game is set for a 3 p.m. first pitch time.