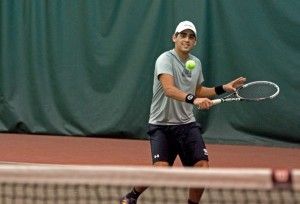 After spending the last year away from the court, men’s tennis player Jorge Cavero is eager to return to competition.

The redshirt sophomore has been recovering from a left wrist injury since the Oct. 21 Intercollegiate Tennis Association Regionals.

Cavero and his team said they are ready for his return.

“It’s been a struggle for us in matches to play people who are not normally in the top three,” said senior Brandon Florez. “You could always count on Jorge.”

During the fall 2011 season, Cavero advanced two rounds in the ITA All-American’s pre-qualifying stages and beat the nation’s 77th-ranked player in the first round of the ITA Central Regionals, which is his last competition to date.He took MVC Freshman of the Year for the 2010-11 season, and he was named to the MVC All-Select team.

“Seeing your team play while being injured and not being able to help them has made me anxious,” Cavero said. “It motivates me as well.”

Coach Dann Nelson said Cavero’s ability to maintain control has been one thing the team has missed in his absence.

“He’s a good thinker on the court,” he said. “He knows what he has to do to beat people and win matches. You can pretty much leave him alone during matches, and he can figure out what to do on his own.”

Nelson said he expects Cavero to bounce back, though it may take some time.

“Hopefully by the end of the year he’ll be back playing where he should be, somewhere near the top,” Nelson said.

The right-handed Cavero said his forehand stroke has greatly improved because his injury prevented him from practicing his backstroke for most of his rehabilitation. He said he has recently recovered his backhand shot rhythm.

Florez said he has noticed the same improvement.

“I was watching him hit his backhand, and it’s pretty awesome again,” he said. “You can see glimpses of what it once was.”

Senior Badr Cherradi, the top-ranked singles player on the team, said he thinks Cavero’s technical game and physicality is near what it was before he injured his wrist.

He said Cavero will immediately help the team when he returns.

“I can’t wait to see him play matches again and see how he is going to be,” Cherradi said. “I think he’s going to be awesome. He’s one of our top players, so having him back can only be a good thing. It’s going to motivate us to know that he’s there and we can count on him.”

When seniors Cherradi, Florez and Orhan Spahic leave after their final spring semester, Cavero and junior Rafa Cuadrillero will become the team’s elder statesmen. Florez said he could see Cavero as the team’s go-to guy in the coming years.

“You can watch him play tennis and take a lot from what he does,” he said.

“I think he has the intangibles to be a great leader,” he said. “He’s already a leader by example. It just takes a little more time to do it vocally.”

Cavero and the men’s tennis team will return to action Jan. 18-20 at the Missouri Valley Conference Individual Tournament in Des Moines, Iowa.