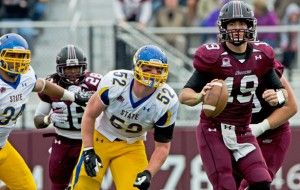 The Saluki football team will use its bye week to catch up with schoolwork, prepare for next week’s Western Illinois contest and recuperate from a rigorous season.

With only one game left this season, the bye has come a bit too late for some team members’ tastes.

“It is a little late in the season,” freshman kicker Austin Johnson said. “It would have been kind of nice if it was in the middle of the season because we could have rested some guys up.”

Although the team isn’t preparing for a weekend game, the practice schedule’s only major change has been the time frame. Coach Dale Lennon moved the team’s practices from 3:30 p.m. to 6 a.m. this week.

“We’re going to go with early morning practices,” Lennon said after Saturday’s 16-12 South Dakota State loss. “We’re not going to have long practices, we’re just going to stay sharp and work on football fundamentals and get ready to go for next week. Basically, we’re going to do what we’ve got to do to be 100 percent on Monday.”

Senior linebacker Jayson DiManche said while the playoffs are no longer a possibility for the team, there is still plenty to prepare for.

“Really, it shouldn’t take much to motivate the team,” he said. “You’re doing something that not a lot of people get to do, and you’ve got one more opportunity to do it. We’ve just got to go in there and do it one more time to make sure we end it the right way.”

DiManche said he has never experienced a bye week so late in the season, but the break gives his teammates and him a chance to recover for the season’s final game. The Nov. 17 matchup could be the last time the senior linebacker steps on a football field.

DiManche, who leads the Salukis in sacks with seven and has 43 recorded on the year, said he isn’t ready to give up his football dreams.

“As soon as the season is over and everything gets settled, I’ll start working out and trying to continue my football career,” he said. “I plan to graduate in December so that’s a good thing, but there’s nothing I’d rather do than play football. If I get the opportunity, I’ll definitely take it.”

While a conference championship or playoff appearance is out of reach, the Salukis still have their pride to play for, which DiManche said is more than enough.

“We’ll go out there and play really hard to finish off what has been a pretty exciting season and a fun season to be part of,” he said. “We’ll play for the pride of the university and for the team. We’ll put it all out there and do our best to come out on top.”