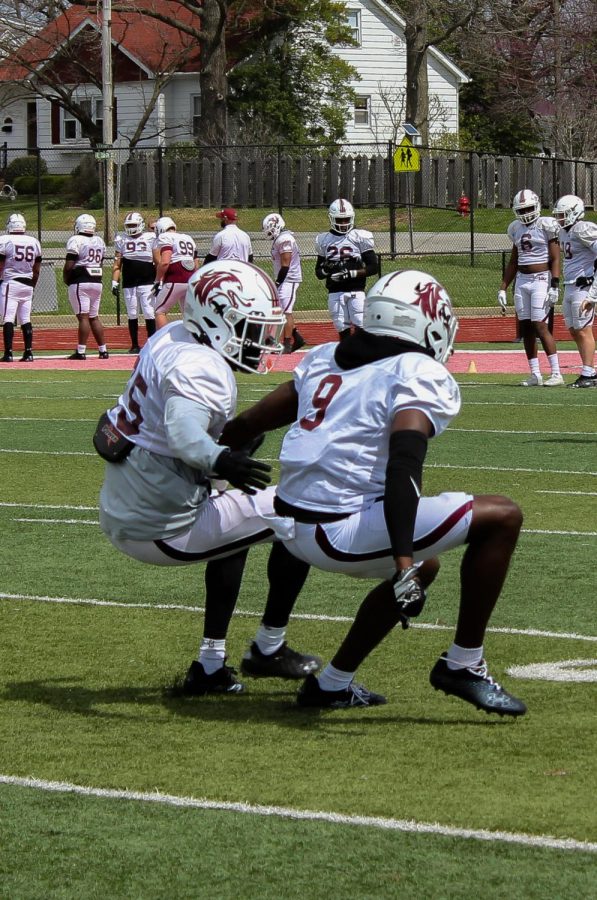 As the spring season begins in 2022, so too will some of Southern Illinois University’s (SIU) fall sports teams begin their process of getting ready for the upcoming season. Most recently, the SIU football team has begun holding spring practices throughout the week for some early insight on how the team looks at this early point.

Thursday, March 17 kicked off Saluki football’s spring practice sessions. This started the schedule of roughly 3-4 practices a week with a spring scrimmage finishing things off April 16. Practices have generally been held every Tuesday, Thursday and Saturday, with one practice being held on a Sunday. This will make for a total of 15 practices.

As of their first practice on March 17, it was 103 days since their playoff loss against North Dakota State and 170 days until their first game this upcoming season against Incarnate Word so there’s still plenty of time to be ready for the upcoming season.

Head Coach Nick Hill said he wanted to be sure they made great use of the time.

“It’s just a great time here in the spring as an opportunity. We want to take advantage of these opportunities. With new players, it’s back to basics in the spring with some day one installs and you build. It’s about coming out here and becoming better individually as a team and putting some schemes in,” Hill said.

Freshman wide receiver TJ Atkins is one of the new guys added to the team this year. Although Atkins signed with SIU in the fall of 2020, he spent the entirety of the 2021 season as a redshirt freshman, meaning he never was able to get on the field. Atkins said he’s eager to continue to use this spring as an opportunity to keep getting better.

Atkins said even though he’s one of the newbies on the SIU football team, he’s been treated just like everyone else.

“It’s not necessarily any different for me. When I got here I felt like I was brought into open arms. Everybody I look at is family here. It’s not any different,” Atkins said. “We’re together and work hard everyday. We get out here and put on film for coaches to go over in the film.”

With the uncertainty of event planning and scheduling the past two years due to the ongoing pandemic, spring has been a bit different lately for the Salukis. The shutdown of all sports happened during the 2020 spring and a new spring season was happening in 2021.

Coach Hill said he’s grateful for the spring opportunity to better the team.

“We really haven’t had a true offseason since 2019, so it’s nice now. Spring is huge for the development of your program. We spend 8 weeks in the weight room training and then into the spring practices like we are right now, so finally getting this spring now after not having it the last two years is big for our program,” Hill said.

The playoff loss to North Dakota State last season marked the end of many of SIU’s most talented player’s careers. Players like Qua Brown, Zeveyon Furcron, Anthony Knighton and James Cesar all will not return next season for SIU, meaning some other players might have to step up for the team.

Fifth-year senior defensive tackle Keenan Agnew will look to try to fill some veteran roles on the defensive side of the team now that many of last season’s seniors are gone.

“[We’ve] got a great mentality right now. We definitely want to get better. We know that we have to get better. We lost a lot of really good players last season that were fifth and sixth-year seniors. A lot of guys here need some more of that experience. I feel like we’re driven and we’re enjoying it right now for sure,” Agnew said.

Agnew said he finds himself and a couple of others like him function as some of the leaders amongst the locker room.

“I find myself as a leader. People like Jacob Garrett, Beau Branyan, they’re all leaders. Makel Calhoun is one of the leaders on defense and he does a great job as well to lead them. There’s a lot of guys leading pretty well right now, but those are a few that come to mind,” Agnew said.

Regardless of how far away the season might be, the team is still giving it their all right now in the preparation process. Hill said he’s pushing every player to give it all they got.

“We’re pushing them everyday to be at their best. Whether they’re out here for 20 minutes or out here for two hours, it’s maximum effort and attention to detail at all times. We’re attacking the day to get better,” Hill said.

Agnew said the team knows all about the work in front of them.

“We’re always out there trying to push ourselves. I don’t care who you are, you could be the best player in the world, you still have room for improvement and you can still get better. We know we can’t be satisfied and we know we have to keep working and improving on everything we need to do,” Agnew said.

Considering how practices are just starting up and the players are pushing themselves every day, soreness and muscle fatigue is going to be a part of the process as well. For Agnew, as one of the veterans now in the locker room, he said he knows what he needs to do to kick the soreness away.

“The body is definitely feeling sore. I am a senior now so it’s definitely going to feel sore a little bit, but it’s a part of it. It’s more of a mental thing. You’re going to be sore, you can’t let it get to you though,” Agnew said.

Atkins said it’s up to him to make the time to keep his body in check.

“Of  course I’m sore, but I’ll go to the trainer just to get extra work and mobility and stuff like that. It’s all on me to get my body right for practice,” Atkins said.

The Salukis will continue their spring sessions six days a week until their scrimmage game in April with film study, weight training, or actual practice.