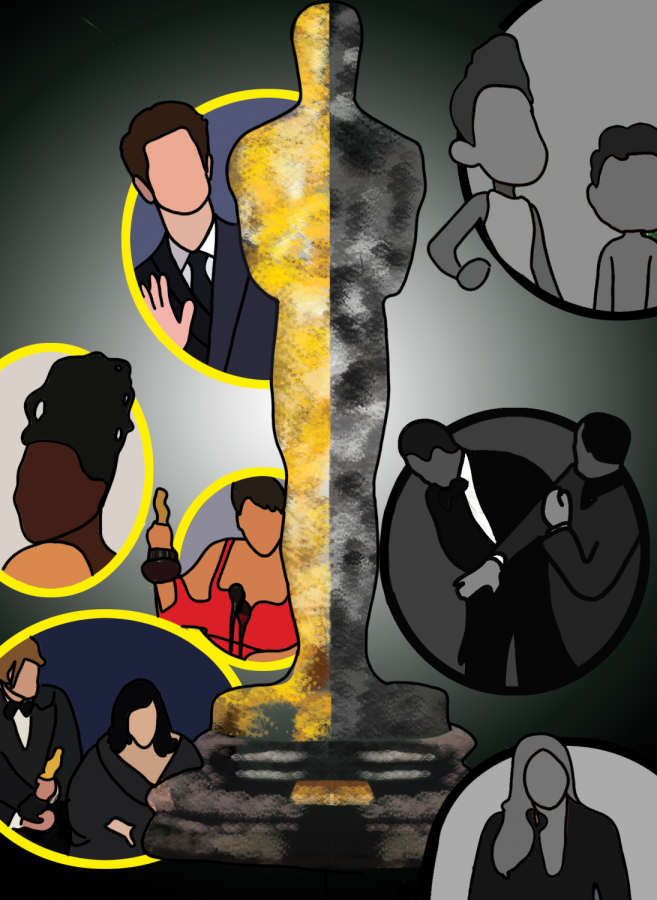 Aside from the giant unhinged elephant in the room, the 2022 Academy Awards were a hot mess for more than a few reasons. For a ceremony whose tagline was “Movie Lovers Unite”, a phrase repeated ad nauseam, the academy seemed to be consistently making regressive decisions.

One of the first red flags going into the ceremony was their announcement that a large chunk of the early awards would not be televised. The cut categories were documentary short, film editing, makeup/hairstyling, original score, production design, animated short, live action short and sound.

These awards were instead handed out while the stars were walking the red carpet, which was airing before the show and was an hour and a half long. The recordings of these awards being handed out were then shown throughout the ceremony and typically took up only a few minutes and were awkwardly edited in.

This decision was made in order to shorten the ceremony, which ended up being three and a half hours long anyway. The fact that they still aired the completely pointless, cringe-inducing, ego-stroking red-carpet ceremony, rather than giving that time to honor the actual filmmakers is completely indicative of the core problems with the Academy.

Over the years the show has become a platform to showcase high profile celebrities rather than award films/filmmakers, making the Oscars closer to Entertainment Weekly than a prestigious film ceremony. This is further exemplified by the Academy’s tendencies to nominate films that are more popular and have more star power behind them as compared to lesser-known independent films, which often are regarded as superior to the yearly nominees by most.

But the Academy’s questionable decisions don’t stop there. This year introduced the two new fan-decided categories, the “Oscars Cheer Moment” and “Oscars Fan Favorite” awards. These categories were decided by Twitter polls in which anyone could vote. These additions were added to garner more interest and “build an engaged and excited digital audience.” The result was tragically hilarious to say the least, with “Zack Snyder’s Justice League” winning the best Cheer moment along with “The Flash Enters the Speed Force.” Unsurprisingly the internet was quick to poke fun at this with speed force jokes littering Twitter following the win.

The worst was yet to come however, as the “Fan Favorite” category proved even more problematic. One of the nominated movies was “Minamata” starring Johnny Depp, who has been all but blacklisted in Hollywood following domestic abuse allegations. “Minamata” is largely unknown and underwhelmed critics but made it into the nominations due to large fan campaigns to get the film included, likely a majority of which had not even seen the film but was simply an attempt to defend Depp in the ongoing controversy.

The same goes for the 2021 “Cinderella” led by actress and singer Camila Cabello. The film was panned by critics and fans alike but made it into the category because of another campaign from her music fans.

But the winner of the category was yet another film from director Zack Snyder, “Army of the Dead”, which similarly underwhelmed critics. The film seemed so middling in its reception in general, that it’s genuinely perplexing as to why it was voted for by so many.

With all this time devoted to so much nonsense, it was even more frustrating when the smaller categories (that were allowed to be aired) were also rushed. All the speeches from the less famous filmmakers were regularly cut off by the music, most egregiously Ryûsuke Hamaguchi’s acceptance speech for “Drive My Car,” where he actively had to refuse the music cue and continue his speech.

All these corners were cut from what most would consider the real purpose of the show, to then be filled up by trivial nonsense.

This is not to say that they have not made a few strides in the right direction in the past few years, although it may be regarded as one step forward, two steps back. Following “Parasite’s” sweep at the 2020 Oscar’s, the nominations have been much more inclusive. This year four international films broke out of the Best International Feature category, “Drive My Car”, “Flee”, “The Worst Person in the World” and “Parallel Mothers”. Although none of them won anything outside the international category, it’s better than nothing.

This year overall, had a solid slate of nominees, although few of these subversive nominees won anything. With films like “CODA”, “Belfast” and “King Richard” winning over the more deserving nominees, and while films like “The Power of the Dog”, “Drive My Car”, “Licorice Pizza” and “West Side Story” got plenty of deserved attention, this doesn’t even account for the myriad of excellent films released in 2021 that received no nominations at all.

Some of my personal favorites from 2021, including “Red Rocket,” “The French Dispatch” and “The Green Knight” received no attention from the Academy whatsoever.

With all of that said, this hasn’t even touched on the night’s most embarrassing and shocking moment. By now you’ve likely read more takes than you probably ever wanted on actor Will Smith slapping comedian Chris Rock on live television but it represents much more than a “was he right or wrong” debate. It is exactly what’s wrong with the Oscars and super stardom at large.

The sheer level of narcissism and disrespect for the industry and films themselves is much more alarming. While this is the direct result of an ego gone unchecked, this also detracts from all the work from everyone else involved with “King Richard” and the ceremony itself. Smith went as far as to use the content of the film (and by extension the real lives of the William’s family) as an emotionally manipulative tactic to justify his actions during his acceptance speech.

Whether you buy into his self-pitying apology or not, the result remains. All attention was completely shifted away from the films themselves, completely rendering this year’s Academy Awards a complete and utter joke.

While this altercation was seemingly completely out of the Academy’s hands, when coupled with all the issues already present, it’s hard to continue to lend them any credibility going forward.

The awards given out still gave some deserved recognition, most notably “Dune’s” technical achievements and director Jane Campion’s excellent work on “The Power of the Dog.” But with all the aforementioned missteps, it’s hard to look back on the 2022 Oscars with any positive feelings.