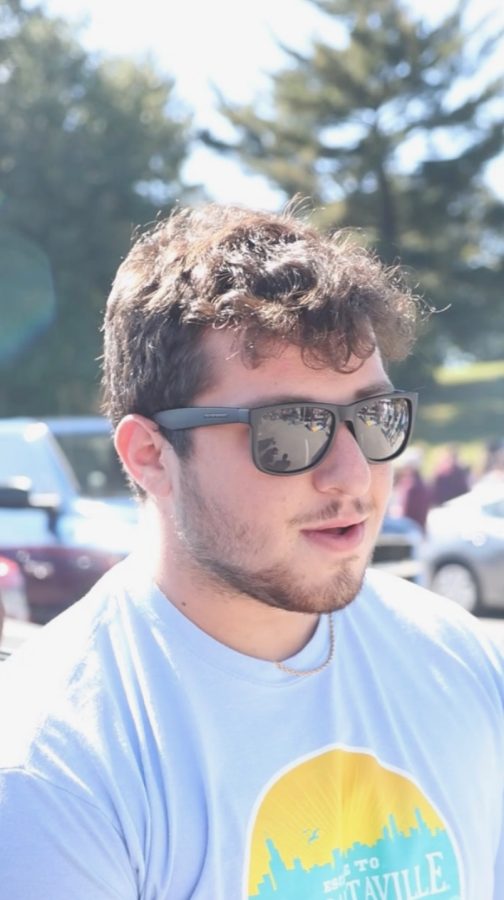 Jacob Jurinek appears in a Daily Egyptian video just weeks before he was killed in the Astroworld tragedy.

Third year journalism student Jacob Jurinek, is being remembered at a blood drive arranged by his cousin Bridget Hyland and former girlfriend Emma Braning on April 1. .

Jurinek died during Travis Scott’s performance at the Astroworld music festival on November 5, 2021 in Houston, Texas, along with nine other people.

He is being posthumously awarded his Bachelor’s in Journalism from Southern Illinois University (SIU) at spring commencement, the university announced in December.

“The idea for the blood drive was his cousin’s. She reached out to me about doing one in Carbondale; she is hosting one in Naperville and wanted to allow for friends of Jurinek to donate if they wanted to,” Braning said.

Hyland, Jake’s cousin and a pediatric resident physician, said the coordinator from the university made it super easy to organize the Naperville drive and all she had to do was choose a date.

“I wanted to try to plan a similar event in Carbondale so all of Jake’s friends, classmates, and teachers could have an opportunity to get involved. I am so grateful that Emma was willing to organize the drive at SIU,” Hyland said.

Braning said they have 40 people registered to donate but added six more spots after more people wanted to take part.

“I am hoping to have more people register before the drive and have walk-ins as well,” Braning said.

Braning hopes to bring  people closer together to share stories of Jurinek at the drive, she said.

“For me, Jake was the biggest part of my life. I think I will also remember him as my first friend in Carbondale and how he was always there for me,” Braning said.

Hyland said she hopes people will see this drive as a way to make something positive out of a bad situation.

“To all of his cousins, and just about anyone he met, Jake was as close as it comes to a real life superhero,” Hyland said. “I cannot think of a better way to honor Jake…than by working together to try to save lives.”

Braning said Jurinek loved drawing crowds and being with people.

“During the time of the crowd surge, he told the people around him that he had just become friends with that he would ‘protect them at all cost.’ I think doing this blood drive is a great way to continue that statement,” Braning said.

Recently due to the COVID-19 pandemic, the Red Cross has been facing a blood shortage.

Tara Lincoln, a blood donor recruiter for the Red Cross, said the drive will help offset the recent blood shortage by bringing people who knew Jurinek and new donors out to honor him by giving the gift of life.

“Right now, the need for blood is outpacing what we are collecting so we need everyone to get out and donate. Twenty percent of blood collected comes from high school and college students,” Lincoln said.

She said COVID-19 made collecting blood difficult because most high school and college students were virtual for class via Zoom.

Lincoln said the Red Cross has started testing for COVID-19 antibodies again, for a limited time.

“Please donate blood because each donation has the potential to help save up to three lives,” Lincoln said. “It’s the blood currently on the shelves that helps save the lives of patients in need and patients may not have time to wait for lifesaving blood, especially in emergency situations,”

Lincoln said it is also important for people to donate as often as they can because the blood must be tested and processed to ensure it is safe to give to a patient which could take up to forty eight hours or longer.

“As a doctor, I routinely see the impact that donated blood can have on the lives of patients and their families and if even a fraction of those who knew Jake donate in his honor, we have the potential to help hundreds of families enjoy more time together,” Hyland said.

Lincoln said all donors who come out to donate will receive a Red Cross t-shirt while supplies last from April 1-18, 2022.

The blood drive is scheduled to take place on April 1, 2022 at the Student Center’s Renaissance Room.

“If people have any questions or need help registering, they can contact me at [email protected] and if all the spots that we have currently available fill up, then Tara and I will add more,” Braning said.

Braning said people can also go to her Instagram: @officially.emma_ and click the link in her bio to register.

Braning said she hopes Jurinek gets the message.

“I would tell him how he was the best person I have ever met and how lucky I am because I got to call him my boyfriend. He will always be my best friend,” Braning said.

Hyland said she would thank Jurinek for being the most incredible role model to everyone who knew him.

“If everyone who sees this takes up just one of his habits, the world would be an infinitely better place. Make everyone feel like your best friend. Find something you are passionate about, and talk about it any chance you get,” Hyland said.

Braning said she wants to start a scholarship in Jurinek’s name, but is currently focused on the blood drive.

Other people like Bridget Lescilius,  manager of the Saluki AdLab team, are also working to keep Jacob’s memory alive.

“We will be having an art reception highlighting his work closer to graduation time,” Lescilius said.

Hyland said their family has tried to make it a point to spread Jurinek’s enthusiasm for life and that her family hopes everyone who knew him will join in doing so.

“Spend an afternoon making the kids giggle. Prioritize your family. Write a note of appreciation. Tell a funny story. Treat every day like it’s the best one ever. Love more. Judge less. Be unapologetically, authentically you,” Hyland said.

Editors Note: The byline on the print version of this article published on March 30, 2022 was printed incorrectly.