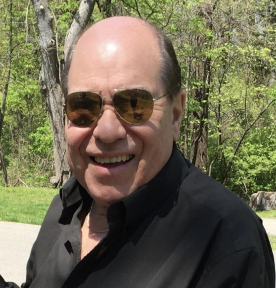 Alejandro Caceres, who passed away on November 23, 2021, is remembered by friends, colleagues and family as a passionate teacher, musician and mentor.

Brianna Janssen Sánchez, a coordinator of teacher education at Southern Illinois University, said she’d initially planned to pursue an undergraduate degree in biology before taking a class with Caceres. She changed majors because of his encouragement.

“It turns out that I was really good in Spanish,” Sanchez said. “Now that I reflect on it, of course, after he’s gone, he really changed the course of my life.”

Caceres was born in Montevideo, Uruguay, and came to the U.S. in 1979 on a music scholarship through the Organization of American States, according to an obituary written by his friend of 42 years, Charles Slinger. Caceres earned undergraduate degrees in piano performance and choral conducting, and a masters and doctoral degree in Spanish literature from Indiana University.

In 1994, Cacares became an associate professor at SIU, where he played an active role supporting students beyond his position as a teacher.

“I had won an award through student athletics, an academic athletic award, and he joined me,” Janssen Sánchez said.  “Before I was even a Spanish major, he joined me at that event, and I just felt like having that support so early on from somebody who wasn’t even a major, that probably had an impact on me,”

Caceres also continued to share his love of music with the SIU community.

“This year I chaired an event called World Languages Day, and Dr. Caceres wasn’t able to participate. The event has been going on for 45 years,” Janssen Sánchez said. “We thought about him a lot because he was an avid participant. He danced the tango, and he played the piano, and he was so involved.”

The passion Caceres had for a variety of subjects was core to his ability to connect with students, Janssen Sánchez said.

“One thing I remember was a project that we did in one of his literature classes, and I didn’t really identify as much with literature as some other students in the program,” Janssen Sánchez said. “He could have said, ‘No, that’s not right. I don’t think that’s the way you should go.’ Rather than do that he just really let students kind of find their own way with the material, and make their own connections.”

A memorial service for Caceres will be held on March 26 at 11 a.m. at The Church of St. Francis Xavier, 303 S Poplar St.

Jason Flynn can be reached at [email protected], by phone at 872-222-7821 or on Twitter at @dejasonflynn. To stay up to date with all your southern Illinois news, follow the Daily Egyptian on Facebook and Twitter.