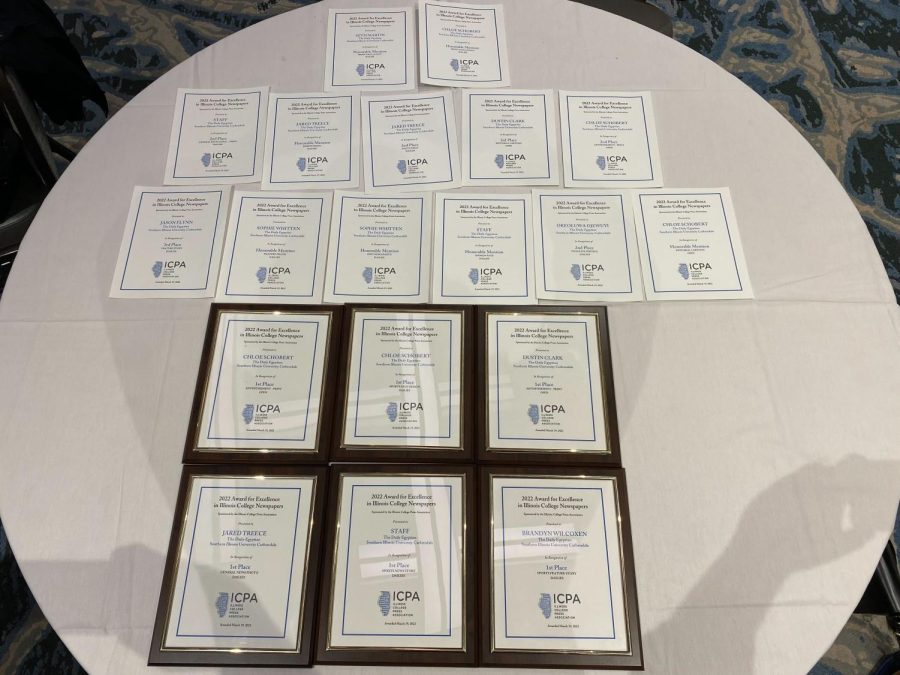 The Daily Egyptian won 19 awards at the Illinois College Press Association (ICPA) annual conference in Chicago, held from March 18 to 19.

ICPA has been hosting their annual conference for 30 years as a way to celebrate students in the journalism field. Collegiate, student-run newspapers from across Illinois attended the event such as University of Illinois at Urbana-Champaign, Southern Illinois University Edwardsville and more.

The event was spread out across two days with various sessions for journalists to learn new skills, network and discuss current issues in the field. The sessions covered topics such as media ethics and photography critiques.

Oreoluwa Ojewuyi editor in chief for the Daily Egyptian and Annie Hammock Faculty managing editor were panelists for the mental health in the journalism field panel.

On day one, sessions ran from 1 p.m. to 5 p.m. The first session was a photo competition presented by John Plevka, advisor for the Illinois State University newspaper, The Vidette. The debrief of the contest was followed by a lighting seminar by Greg Copper, assistant professor of photojournalism at Eastern Illinois University.

The theme for the photo competition was “block story,” and participants were tasked with telling a story within one city block.

The next three sessions to follow were a crash course in how to use digital software to improve newspapers’ reach, an editor’s roundtable and a critical thinking seminar.

During the editor’s roundtable, advised by Shelly Hendricks and Wes Sanderson of the Northern Star newspaper from Northern Illinois University, editors-in-chief from different newspapers discussed the highs and lows of running a newspaper. The primary topics discussed during the roundtable were issues regarding hiring new people and different areas of funding for the various papers.

The final sessions of the day were seminars on public relations, college newspapers and how they are being funded and a forum on mental health in journalism. The day ended with a newspaper critique, where the different newspapers received helpful criticism about their papers.

Parallels between journalism and public relations were analyzed in the public relations seminar led by Greg Rivara, chief of communications for the Illinois State Treasurer’s office. Rivara said platforms should know what their message to their audience is, and should not add too much into lead sentences.

The final day of the conference started off with a photo critique for the photojournalists who participated in the contest the day before. Sophie Witten the photo editor for the Daily Egyptian received an honorable mention. Other sessions following the critique discussed improving stories’ visual appeal online and the structure of news stories at Springfield.

The closing sessions were on how to make sports stories more engaging, and the challenges when dealing with media ethics.

In the media ethics session, Andrew Ventimiglia, assistant professor of communication at Illinois State University, talked about how media ethics is vital to journalists today. Ventimiglia discussed how misinformation and the mistrust of journalists have made the job of seeming neutral when presenting news to a broad audience more difficult.