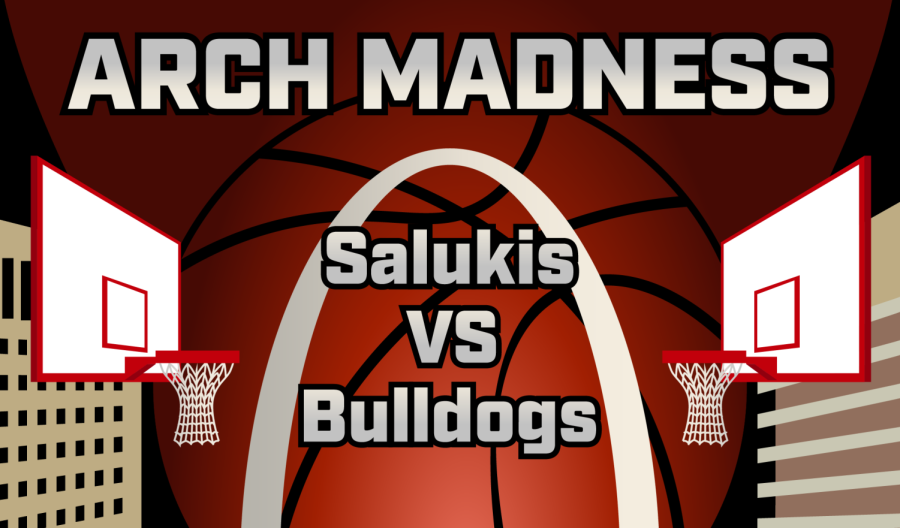 Southern Illinois men’s basketball (16-15, 9-10 fell in the Missouri Valley Conference quarterfinals to the Drake Bulldogs in St. Louis on Friday.

The loss ends the Salukis’ season, SIU was led in scoring by junior forward Marcus Domask who has 18 points and eight rebounds. The Salukis struggled from the three-point line shooting just four for 26 from the three.

Mullins said he was proud of his team despite the loss.
“I’m proud of our guys, these guys have battled every single game this year, I love coaching these guys. We didn’t play our best tonight, and give credit to Drake, that’s a veteran team that’s a tournament team, an experienced team. They just made a couple more plays than us in the second half,” Mullins said.

Jones discussed the momentum shift at the end of the first half as Drake was able to take a two point lead into the break.

“For them it was very big, they took the lead going into halftime and built up momentum. They just had a lot of confidence going into the half and coming out of it,” Jones said.

Domask and Jons spoke of the feeling after the defeat.
“Just looking around the locker room, guys are really frustrated, tears in the locker room. I feel like we were close in this game. They just obviously had a big run. So I feel this is a message that we’re close and hopefully this sticks with us,” Domask said.

The Salukis went on a field goal drought of over five minutes in the early part of the second half.
Mullins discussed what he was telling the players during that drought.

“Just keep trusting what we’re doing, we’ve got to take care of the ball, we obviously can’t afford turnovers. But, we were able to get some good shots, it’s going to be hard when you go four for 26 from three,” Mullins said.

Jones opened the scoring for the Salukis as he made a three to put them up 3-0 just 22 seconds into the first half.

Two minutes into the half, a Domask layup gave the Salukis a 7-6 lead.

The Salukis largest lead of the game came with 2:48 remaining in the first half when Jones put SIU up 7 by a score of 24-17.

That lead would quickly fade as Drake’s Devries helped jumpstart an 11-2 run to put the Bulldogs up 28-26 at half time.

Southern Illinois never led in the second half after the Bulldogs came out of the gates scoring 14 of the first 20 points in the half.

SIU would cut the lead down to six with 7:43 left in the game on a three-pointer from senior guard Ben Coupet Jr. After the three they trailed the Bulldogs 48-42. However, Drake would respond with an eight to two run that put the game out of reach.

Some late scoring by both teams put the final score at 65-52.

The Drake Bulldogs will advance to play the Missouri State Bears in the MVC semifinals on Saturday.

Sports editor Ryan Scott can be reached at [email protected] or on twitter @ryanscott134
To stay up to date with all your southern Illinois news, follow the Daily Egyptian on Facebook