The “wired” war: reactions from the digital front 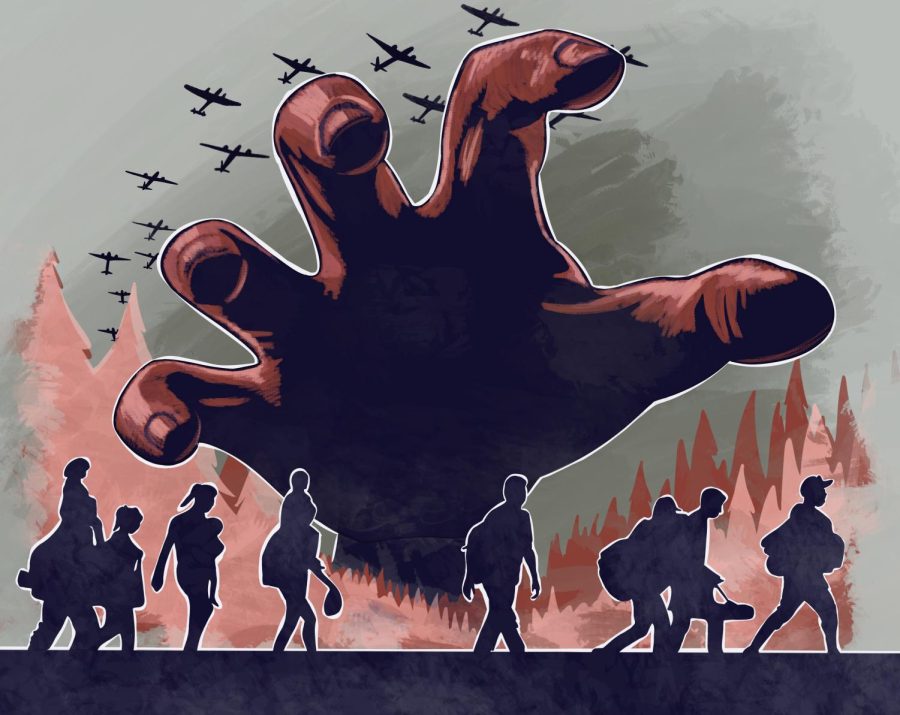 Russia is the bad guy, and I’m tired of pretending it isn’t

While Russian aggression has so far been limited to the boundaries of Ukraine, the world’s most recent war is being fought in a new way on a new front: the digital territory. Conservative political commentator Thomas L. Friedman calls it “World War Wired – the first war in a totally interconnected world.”

Ukraine President Volodymyr Zelensky has taken to Facebook video to plead with Russian citizens to denounce their own leader’s actions and to appeal for understanding and peace. Facebook, Twitter, Instagram and other social media sites are filled with images in the “strong azure” and yellow of the Ukrainian flag, indicating thoughts and prayers are with the besieged nation across the globe.

Here in Carbondale and the surrounding area, the sentiments are much the same. But the responses are much more complex than the ubiquitous statement “I stand with Ukraine.”

The Daily Egyptian posted a question to its own Facebook page and the WTF Carbondale page asking people to share their thoughts. The responses are filled with condemnation of Russian President Vladimir  Putin. They use words like “thug,” “war criminal” and “megalomaniac.”

Facebook user Hannah Chapman said the invasion is not only an attack on Ukranian sovereignty, but on humanity.

“In the Age of Social Media, we are able to see how deeply rooted Putin’s hatred of opposition is. Committing war crimes against the people of Ukraine, arresting Russian citizens who are standing up against him and his extremist agenda, and threatening NATO countries with violence if intervention precedes is something that will not be tolerated in 2022,” Chapman wrote.

“Vladimir Putin has proven beyond any doubt but he is nothing more than a thug. A terrorist. A megalomaniac who does not value the lives of others,” Erbes wrote. “He’s doing it because he knows that most likely, no one or nation will take the necessary and ultimate steps to stop him. I fear what the future of the world looks like if that is indeed what unquestionably comes to pass.

Isaac Ludington, who wrote about Ukraine and Russia in a  Letter to the Editor published by the Daily Egyptian, posted to Facebook calling the invasion a “blatant injustice.”

“Putin and Russia should rightfully be treated as the rogue state that they are and I hope the war is quickly brought to a peaceful conclusion that respects the borders and sovereignty of Ukraine,” he wrote.

Ludington also urged NATO and other Eastern European countries to “quickly take action to mitigate the risk of Russia attempting such aggression again.”

Joshua Hellman, however, posted his fear that U.S. and NATO involvement could have dire consequences. If the conflict goes nuclear, he wrote, it would threaten the survival of the human species itself.

“All sides must work to end this conflict as quickly as possible before that [worst] case scenario is allowed to happen,” he said.

While the nuclear threat diminished greatly after the fall of the Berlin Wall and the collapse of the Soviet Union, the intense uncertainty of the Iron Curtain era is raising its familiar head. Facebook poster Chet Lunsford calls the invasion the “beginning of Cold War II.”

Facebook user Victor Ludwig suggested there is plenty of blame to go around.

It’s the people of Ukraine and Russia that are most on the minds of the commenters.

“Russian soldiers have been thrust into a war of aggression and Ukrainian citizens are fighting for their lives all while Russia uses the opportunity to gain power and NATO strong arms Sweden and Finland into the fold,” Ludwig said. “ I caution everyone to be as critical of the US and NATO as it is of Russia. Neither side is on the right side of history. This tragedy should not be an opportunity to siphon humanitarian aid into military coffers. I won’t be assured of NATOs good intentions until every refugee is housed, every hospital is supplied, and peace and Ukrainian Sovereignty is assured.”

Chapman said, “President Zelensky and the people of Ukraine are brave and resilient, and deserve every ounce of recognition they are receiving. Seeing the raw heroism exhibited by the people is astonishing to see. The world is standing with Ukraine. Слава Украине (Glory to Ukraine)!

Kevin McCarty, whose now deceased grandparents were from Ukraine, said he grew up around the nation’s language and culture.

“I have been awake watching the news horrified but also in awe of the courage and strength of the Ukrainian people as they fight against this futile invasion,” he wrote.

Rachael Sophia Paull weighed in from Hungary, where she lives about an hour’s drive from Ukraine.

“I feel angry the the certainty of safety and a normal life can so swiftly ended for so many because of the ravings and desires of one psychopath in power, and that threat can extend immediately anywhere in the world because of nuclear capabilities.”

She is impressed with the Ukrainian people, Paull said, how resilient and clever they are in resisting a much bigger world power.

“I’m sad for the innocent people on both sides being forced to kill one another for the benefit of so few. It all seems so pointless.,” she said. “I can’t decide between being angry, scared, or sad. Mostly, just numb.”

Shadi Frick noted war is an archaic monstrosity for such modern times.

“Here we are in the 21st century in the age of virtual everything, yet very REAL wars are still happening, killing REAL people. It just goes to show no matter how far “forward” we have supposedly gone as a human race, we continue to be barbaric, willing to kill.”

The geopolitical impacts of the invasion will be widespread and long-lasting. But the human cost, in real time, is of little concern to the people guiding the troops from afar, Austin Hoffman wrote.

“All war is outrageous in an age where there are larger problems at foot,” he said. “Humans are so selfish and it has been the rich leading the blind for generations.One day I hope every civilian truly drags its oligarchs, monarchs, and dictators STRAIGHT INTO HELL!”