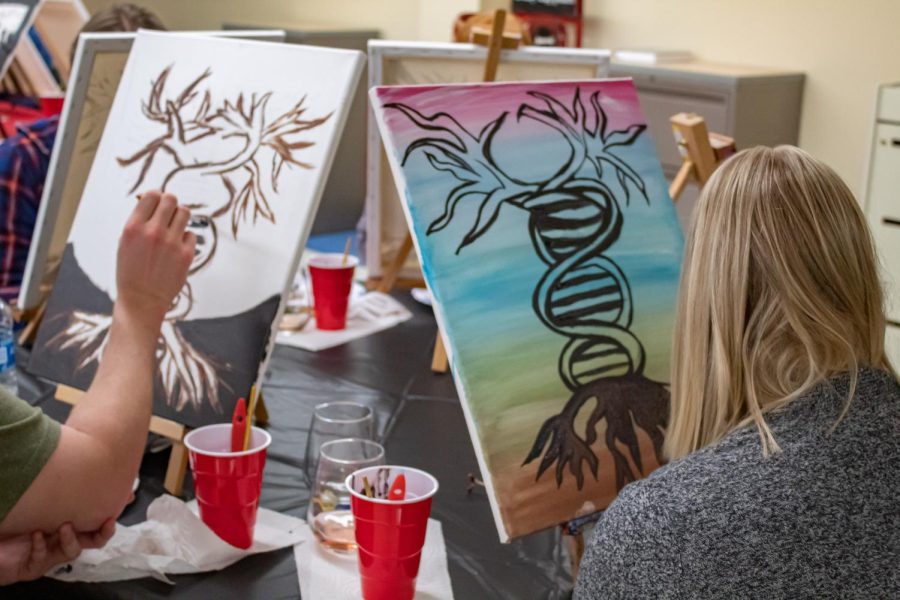 Mariah Hendrickson paints a picture of a tree in the form of a DNA strand at the Project Human X paint night Feb. 19, 2022 in Carbondale, Ill.

On Saturday Feb 19 from 6 p.m. to 9 p.m. Project Human X hosted a paint night at the Southern Illinois (SIU) University Law school Library in honor of Henrietta Lacks. She was an African American woman who died from cervical cancer and doctors took her cells and used them to help further medical advances in the 50s. Attendees painted a tree shaped into a DNA strand to represent Lacks’ DNA and how it made many advancements in the medical field.

Before the painting started Tiara McKeithan, a first year law student at SIU announced that the proceeds from the night’s event would go to the Boys and Girls Club of Southern Illinois and help form a scholarship fund for BLSA. The painting was a tree in the shape of a DNA strand to represent how Henrietta Lacks’ cells changed the medical field.

Gloria Lewis, a first year law student and a member of the BLSA (Black Law Students Association) said they are hosting this event to bring light to the Henrietta Lacks case.

“The polio vaccine was invented because of her cells. The Human Genome Project was actually started because of Henrietta Lacks’ cells so doctors were actually taking her genetic makeup and publishing that for the general public,” Lewis said.

Lewis said doctors made millions of dollars off of using Lacks’ cells to help further advance areas of the medical field. Despite this doctors did not ask permission from the family of Lacks’ to use her cells or compensate them for the medical advancements Lacks’ cells created.

Lewis said cases like Lacks’ are becoming more prevalent in the medical field when it comes to physicians treating Black people.

“The mortality rates for black women giving childbirth are ridiculous. We are almost three or four times more likely to die in childbirth than women of other races,” Lewis said.

Marquez Scoggin, the co-founder of Project Human X said they partnered with BLSA because they wanted to show what Henrietta Lacks’ legacy means through art.

“The tree in relation to her family. That’s the symbolism that I have with this canvas and then, the background is black and this is black symbolic of, the fact that this is a black woman that we’re talking about her DNA and there’s a galaxy background, which it just adds an element of beauty to it and really,” Scoggin said.

Scoggin said he hopes the painting embodies how Henrietta Lacks’ helped create many of the medical strides we see in today’s society.

Scoggin said the doctors who took Lacks’ cells should have asked for consent first instead of taking her DNA.

Scoggin said respecting one another’s bodies should always come first no matter what the case may be.

Shaniyah Williams, a member of Project Human X said this event will help shed light on how it was not ok for Lacks’ or her family to be taken advantage of that way.

Williams said staying aware about situations like Lacks’ will keep the Black community remain aware if doctors try to take advantage of them.

Williams said practices where certain parts of people are being stolen without their permission will result in people not wanting to go to hospitals. This practice causes Black people to have distrust in hospitals.

“I think that art is one of the greatest ways to shine light on the challenges that humanity is facing. So I’m very thankful to be using art in this manner, and I’m excited to see what else Project Human X can do with art in the future to empower humanity,” Scoggin said.