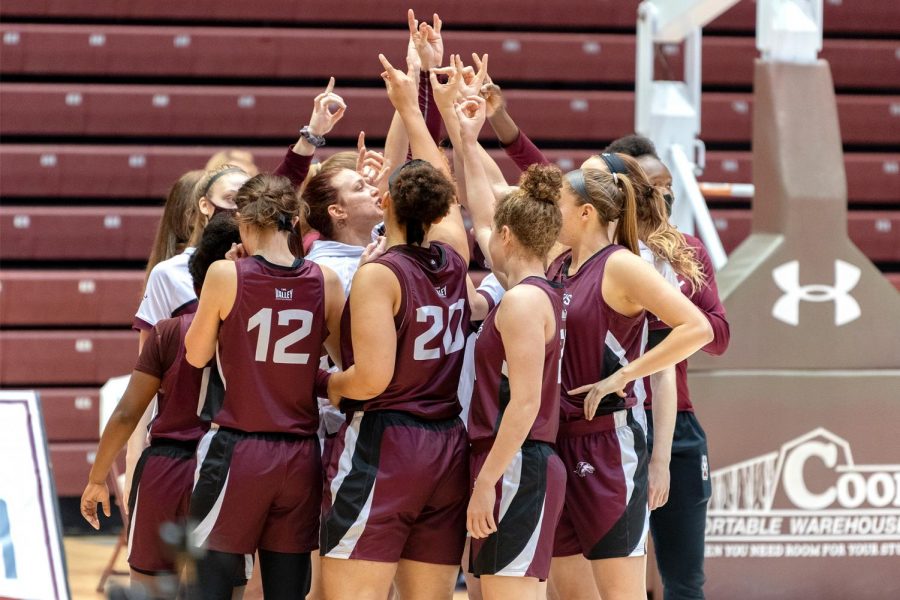 The SIU women's basketball team raises their hands in a pump up before the game against Illinois State on Saturday, Feb. 6, 2021, in the Banterra Center at SIU. The Salukis went on to win 43-41 to the Redbirds.

Saluki Women’s hoops kept their winning ways moving during Sunday’s trip to Illinois State. They won the matchup 65-49 for their fifth win in a row and their ninth win in the last ten games.

The first started out a little back and forth with SIU taking the first lead off a three by Silvey, but at a 5-4 lead the Saluis earned the next seven points to go up eight midway through the first. The Redbirds would earn a couple of baskets, but SIU would turn it on yet again with a 9-2 run to finish out the quarter up by 12 at 21-9.

The second would start off slow for both teams, taking a full 2 and a half minutes to have the first basket from the Redbirds. The rest of the way would favor the Salukis, as the defense only gave up four more points the rest of the quarter. A three-pointer by Payton Mccallister would put the Salukis up 18 late in the frame as they would head into the locker room with a 31-15 lead

The Redbirds would earn the first points of the fourth off a jumper, but wouldn’t get any farther as the teams traded some baskets for a little bit and only got within 14 points of SIU in the frame. A Gabby Walker layup with less than two minutes left would put SIU back up by 19 and it was too much to overcome as the Salukis downed the Redbirds with a 65-49 final score.

The Salukis will try to continue their conference domination with a start to their last homestand of the year against Indiana State on Thursday night with a 6 p.m first tip.