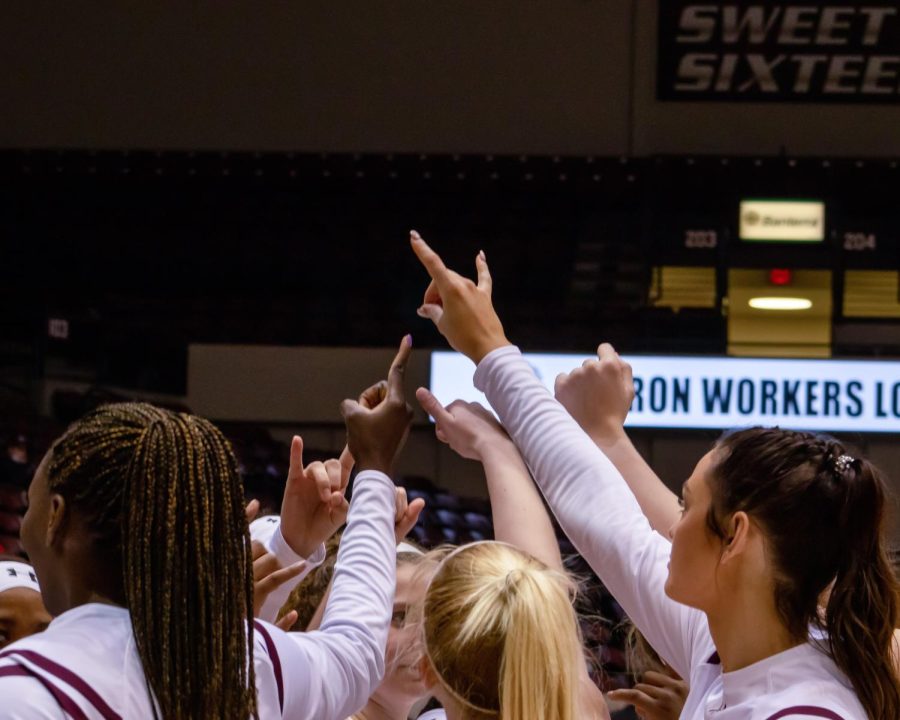 The SIU women’s basketball team participates in a pre-game team breakdown on the court before the game against the Illinois State Redbirds Jan. 20, 2022 at the Banterra Center in Carbondale, Ill.

The Salukis defeated the UNI Panthers on Friday, Feb. 11 in the Banterra Center. This 64-60 win splits the season series between the two teams.

The first points of the game came at the hands of senior guard Caitlin Link with a three from the top of the key. The Salukis scored two more quick buckets to put the panthers under, 7-0.

Not wanting her team to fall behind, the Northern Iowa coach called a timeout in an effort to stop the run with 7:40 left in the first quarter. The Panthers scored its first points with 6:40 left in the quarter.

After the score, the Salukis continued its hot streak. Senior forward Mackenzie Silvey went to work, helping SIU extend their lead, 14-4, by the first media timeout of the game

The Dawgs held a 19-8 lead heading to the bench after the first quarter. Link opened the second quarter with a beautiful backdoor pass to freshman forward Laniah Randle.

The Salukis held a 25-12 lead with 4:56 left in the first half. Senior forward Abby Brockmeyer knocked down multiple jumpers to help the Salukis maintain its sizable lead.

Southern Illinois began to cut the UNI defense up like paper, leading to a 33-16 lead with 1:50 left in the half.

The Dawgs managed to only give up three points as the rest of the half transpired. SIU held a solid 33-19 lead heading into the tunnel.

Senior center Gabby Walker scored the first points of the second half for the Salukis with just less than 8:30 left in the third quarter.

Unfortunately, on the next drive down the court, Walker was issued a technical foul for aggressively running into the opposition. It seemed to be a case where she was taking her anger out on the court after struggling throughout the game.

This led to a UNI-comeback, as the Panthers managed to crawl its way back into the game. Southern Illinois only held a 35-28 lead with 6:01 left in the third quarter.

The Salukis managed to get the lead back up to double digits, 42-32, after the Saluki offense began to revolve around Silvey. By the end of the third quarter, Southern Illinois held a 46-39 lead.

Every time the Panthers tried to sneak back into the game, the Salukis pounced on them, pushing the lead back up to double digits. UNI would need to consistently stop the Dawgs from getting a bucket, which they were not able to do.

With 2:20 left in the game, Walker was ejected after committing yet another technical. Per NCAA rules, two technical/flagrant fouls means automatic ejection.

“Does she need to be smarter? Absolutely. But I need to go back and look at it. I’m sure they were poking the bear, and sometimes the bear pokes back,” Stein said.

Just like that, the 57-46 became 57-50, with the Panthers getting the ball. They converted the extra possession into two points, making it 57-52 with just under two minutes left.

Buckets from Brockmeyer and Silvey helped maintain the advantage. Inevitably, the Salukis won the contest 64-60.

Silvey and Brockmeyer led the game, each with 16 points. Brockmeyer also contributed seven rebounds and two blocks to her stat line.

Brockmeyer said it feels great to stay undefeated at home.

“I feel like every time we win more and more people come out. It feels great when we have our crowd behind us. We love being at home and we feel like we can do things our way,” Brockmeyer said.

SIU will play its next game against Drake on Sunday, Feb. 13 for its second straight home game. The contest will take place at 2 p.m.

Sports Reporter Cole Daily can be reached at [email protected] or on Twitter at cdaily_de. To stay up to date on all your southern Illinois news, follow the Daily Egyptian on Facebook and Twitter