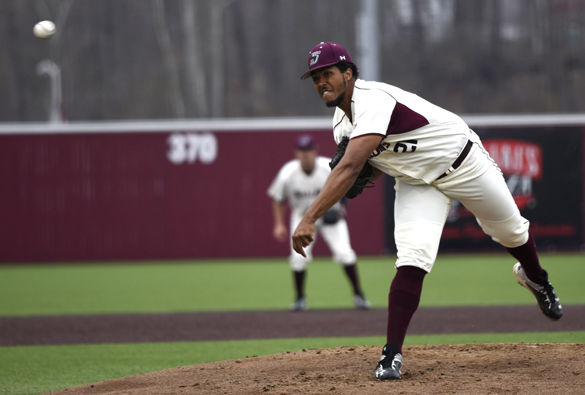 A change in the rotation helped in SIU baseball’s 8-6 win against Illinois State on Saturday.

Junior pitcher Joey Marciano (3-4, 4.04 ERA), who was the Friday starter, was pushed back in the rotation and earned the victory, tossing six innings of shutout ball. Junior pitcher David Meade (2-3, 3.86 ERA) suffered the loss. Sophomore closer Ryan Netemeyer picked up his eighth save of the season.

“Joey looked a lot more comfortable and relaxed today and he pitched probably his best game this season,” coach Ken Henderson said. “Pushing him back a day helped him settle in a bit more and become familiar with the lineup he’d face and that helped him be more successful.”

The Salukis struck first in the fourth inning when senior catcher Taylor Martin cleared the bases with a three-run double. Martin finished the game with a career-high six runs batted in.

SIU added three more runs in the eighth and two in the ninth to pull away.

Illinois State made things interesting in the ninth, scoring four runs off freshman pitcher Seth Hackett and one off Netemeyer before he shut the door out of the bullpen.

The win gave the Salukis their first series win at ISU since 2008.

“It wasn’t the prettiest of wins but a win none the less and this is an important series for us to win going forward,” Henderson said. “We still have some work to do to sweep the series but we feel confident we can go out and finish it off tomorrow.”