The people vs the force 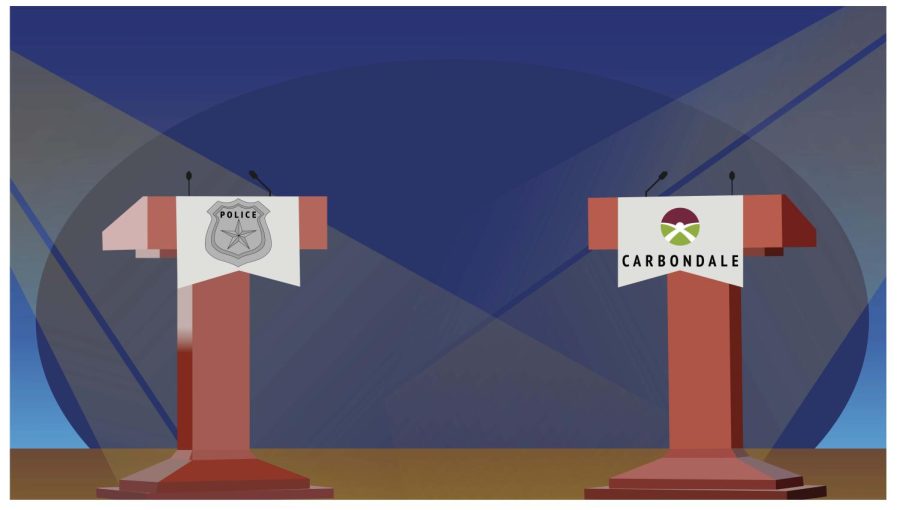 More than 25,000 people live in Carbondale, Ill. according to Data Commons. The safety of the local community is advocated for by multiple groups including the local police force, WTF? Carbondale, and the Southern Illinois Sunrise Movement.

Carbondale is a place where people sleep, eat, and explore, and, according to these community advocacy groups, ensuring safety starts with local police and the media.

While community members complain about the lack of immediate information from the police, the CPD makes it clear it is not practical to push out early details and clues in most cases.

Carbondale has made headlines for violent crime at least three times this past semester, with unreported crimes still occurring without reaching the media. How situations are approached by the local public safety team is disappointing to many vocal residents of Carbondale like WTF? Carbondale administrator and full-time volunteer Nathan Colombo. .

Residents rely on the media and police department to give them important information and inform them on how to handle these situations knowledgeably.

“The response is often ‘we are going to try, but not succeed,’” Colombo said.

Colombo said the CPD has responded poorly in previous situations in person and in the media.

“When there was a shooting at ABC Liquor… two folks that I know were there, and they immediately responded to the person that was shot in the car,” Colombo said. “The police showed up with guns drawn at them yelling ‘get on the ground.’ They took helpers away from the situations as opposed to engaging helpers that were in the situation.”

The department responses in these situations can create frustration amongst community members Colombo said.

“It’s much easier for them to not talk than to talk because it easily opens the door to criticism. They don’t address the media appropriately [and] fail to manage appropriate communication,” said Colombo.

Due to the nature of social media, inner city crime hits internet pages faster than local newspapers. News of sensational events spread through a neighborhood quicker than is often publicized by local law enforcement. When the situations are approached by authorities, residents become dispirited with the outcome.

“In our instant gratification society, where information is immediately available at the push of the button, it is often difficult for people to understand that it is not always realistic to immediately push out information to the public during an ongoing dynamic investigation,” said Chief of the CPD Stan Reno. “In these cases our officers are still trying to gather facts, save lives and conduct a thorough investigation while the evidence is still fresh.”

Reno said the CPD does their best to consistently engage with the media but it becomes difficult with the constant criticisms they face.

“The department tries to have a good working relationship with the media, but obviously there are times when those in various media outlets push an anti-police agenda. This does make it difficult for us to do our job effectively when the media convinces its viewers that all police are a certain way because one officer’s actions from a different department were wrong or perceived to be wrong,” said Reno.

Colombo explains how the police department took initiative during previous situations but feels they need to give that attention to a case through media activity.

“They shouldn’t feel intimidated, that is their job,” said Colombo.

Carbondale Illinois & SIU Crime Watch & News is a group page on Facebook where members  spread awareness on local soft and violent crimes and where people also try to give a heads up on suspicious people.

Ashley Hoppner, a local resident, shares to the group about a local “prowler” peeping through people’s windows. The idea is to promote this information so the residents can look out and protect themselves and their families accordingly.

The goal of the police is to provide a public security service people can rely on, while some Carbondale residents, like Colombo, feel they can’t.

“I don’t rely on the police heavily, I’m lucky that I don’t have to engage with the police,” said Colombo.

Local organizations and non-profit organizations that focus on justice and crime have been surfacing to build an extra shield of safety around Carbondale, like the Southern Illinois chapter of the Sunrise Movement (Sunrise SoIL). The Sunrise Movement’s main objective is to be a youth program that focuses on preventing climate change. Logistics lead Thomas Moss plays a big part in making it possible.

“We’re focused on improving and connecting and cleaning the community. Sunrise SoIL also focuses on local injustices and taking a stand against them in any way we can,” said Moss.

Posts rose on WTF? Carbondale stating that we need to take “Carbondale back from Chicago” have developed major controversy among members of the group who feel Carbondale has grown unsafe for residents.

“I feel as safe as I do in any big city, which is why I don’t feel that safe at all. Car and house doors are always locked, having to walk in groups at night, carrying a knife for protection, setting up home security cameras, getting a big dog. These are the most common things people do around here and advise others to do to feel safe and protected,” said Moss.

“It is not a dangerous community…an instance of violence can affect everyone’s feelings of security,” said Colombo.

Those feelings can be alleviated or exacerbated by how instances are addressed by public safety programs. Moss said copaganda, or biased language used to promote police action and endear them to the community, is used to excuse police behavior.

“I do not believe they handle [violent] crimes in the media correctly. They use a lot of copaganda to cover up their inappropriate and abhorrent actions,” said Moss. “When in meetings with community leaders, we have the chief complaining that the police that terrorize our community don’t feel welcome at events or by community members.”

Charah McKenzie, the Coordinator for the Black Resource Center at SIUC agrees, saying they should make sure to create better training mechanisms to accommodate their community.

“The community should start putting things in place to ensure residents and students are safe, not just the police. [In] any public agency there is a need for ensuring they have proper trainers and have a type of diversity training so they can better serve the community,” said McKenzie.

“Police work is very stressful and mentally taxing.  Each officer handles stress in different ways, Reno said. “A lot of officers like to work out, spend time with their families and do ‘normal’ things to relax and let go of the stress.”

Reno said CPD officers are likely to be perceived as not allowed to have independent feelings but should feel the same as the next citizen. This shouldn’t be the case when their safety is on the line as well.

The department’s program, “5 on 5” , has opened a channel of conversation with the community. Each month five members of the CPD and five residents from the town discuss popular concerns and work together to try and compromise on what they can do to benefit Carbondale.

Staff reporter Kamaria Harmon can be reached at [email protected] or on Twitter at @QuoteKamariaa. To stay up to date with all your southern Illinois news, follow the Daily Egyptian on Facebook and Twitter.