Saluki softball looks for even more success in 2022 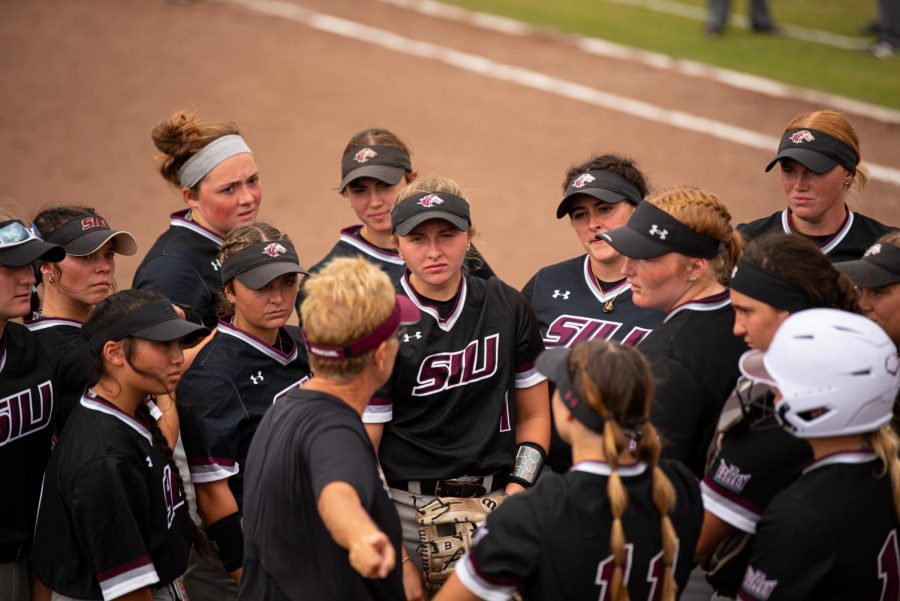 Saluki softball finished the spring 2021 campaign hoisting the Missouri Valley Conference tournament trophy. Although they were eliminated shortly thereafter in the Tempe Regional of the National Collegiate Athletic Association (NCAA) Tournament, the year was considered a success for the program.

“It was a long year but a very rewarding year,” head coach Kerri Blaylock said. “It was a good way to end the season.”

Blaylock is no stranger to success at Southern Illinois. In 22 years as head coach of the softball team, the Herrin native has a winning percentage of .646, and has won five conference championships. The Salukis’ 37 wins in 2021 were especially noteworthy, coming in one of the program’s most challenging seasons.

“It was a hard year with COVID, dealing with all the protocols, and making sure you did everything right and stayed healthy,” Blaylock said. “You didn’t want to lose games… It’s been that mental battle of, ‘are we gonna play? Can we push through it?’ And then, when we got on the field last year, and actually got to play again, it was such a relief.”

After the 2020 softball season was canceled, the 2021 season was heavily impacted by the COVID-19 pandemic. Protocols included requiring the players and coaches to be tested frequently, and limited interaction between players to avoid risking missing games by spreading the virus or being marked as a close contact.

“It’s just really hard when you’re supposed to be playing a team sport, and you’re really not allowed to be a team,” utility player Jenny Jansen said. “On the field was the only time we were really allowed to spend time with each other, and it felt very lonely.”

Jansen is a fifth-year player, gaining an additional year of eligibility after her junior year was cut short. She, along with many other athletes across the country, felt the sting of missing a season.

“It stunk for a while,” Jansen said. “It was not fun to go home, and sit, and do nothing when usually you’re out playing softball every day, and hanging out with your friends. There was just nothing to do.”

Despite this, the extra year of eligibility gave Jansen an opportunity to pursue a master’s degree in sports studies during her final year playing softball. She plans to graduate this spring.

“As bad as COVID is, and as annoying as it has been, I’ve been blessed with another opportunity to play and to get another degree, so I can’t really complain.”

The 2022 softball season looks to be different from 2021, at least in terms of how players experience it. Now that the COVID-19 vaccine is widely available, players are able to avoid regular testing if they are vaccinated.

“That was not required. I was very clear to let them decide with their families. That was their personal choice,” Blaylock said.

This upcoming season looks to be closer to a normal year than the Salukis have experienced in a while, with COVID protocols becoming more lenient, and players adjusting after multiple seasons of unusual circumstances.

“They’re taking it in stride,” Blaylock said. “I think they understand where they’re at, what they need to focus on. The good part is they do get to be together at practice every day. They get to be together on the road trips and things like that.”

On the field, SIU looks to follow up a 37-16 campaign that saw them win the Missouri Valley Conference Tournament. The first goal of the 2022 season is to run it back.

“I think [winning the Valley is our goal] every year, because of where we’ve gotten the program to,” Blaylock said. “That’s their goal every year. It’s tough to do, and as I tell the kids all the time, it’s a marathon, not a sprint. We have to be ready for a 56-game season. It’s a little bit longer than most seasons.”

The Salukis have made an appearance in the NCAA Tournament in three of the last five years, but haven’t won more than one game in those appearances.

“I think this team has the capability to win some games in Regional and potentially go to a Super Regional if all the cards fell in the right place,” Jansen said. Jansen was on two of those aforementioned tournament teams.

“I think we’ve got a core group back that are really focused on that,” Blaylock said. “We’ve got pitching, we’ve got good defense, we are dynamic on offense, and we have some really good newcomers that are really gonna help us out. I think the pieces are there, but you have to practice hard, and go play the game”

Another goal the Salukis have is to eclipse 40 wins, a feat they haven’t accomplished since 2007. Their 37 wins last year was the most since 2010.

“I really do think we could [win 40 games],” Jansen said. “Our schedule is pretty tough this year, but we have a lot of returners. We only lost three or four players from last year, and we have our pitching staff back. I think we have a good chance.”

SIU softball has a well-balanced roster, with five freshmen joining a unit that will look to contribute at every level.

“We’ve got some older kids – Jenny Jansen, Ashley Wood, Sidney Sikes, Sarah Harness, Madi Eberle – all those kids,” Blaylock said. “I’m pretty excited for the kids that have bided their time, and have played behind some veterans that are now getting their opportunity. I think it’s gonna be a mixture of kids who have played a lot and some kids who have been biding their time and getting ready to go.”

Individually, Jansen is on the verge of breaking several school records; 33 hits, 19 RBIs, and 9 doubles away from claiming the all-time record in each category. The Warrenton, Missouri native was described by Blaylock as “a future hall of famer.”

“That’s a really big honor coming from Kerri,” Jansen said. “She’s probably a future hall of famer herself… It feels good to know that all the hard work I’ve put in could possibly last in some sort of legacy here.”

Despite potential individual achievements, Jansen is most focused on spending the year with her teammates, and making the best of her last season.

“We all get along so well, and we all really do care about each other and support each other,” Jansen said. “I could call anybody on the team, and they’d pick up the phone, and come help me if I had a flat tire or something. This team really is special, and I’m excited to get on the field and see what we can do, because I really think there’s good things in store.”

Saluki softball will begin its season on the weekend of Feb. 11 at the Trojan Classic in Troy, Alabama.

Staff reporter Brandyn Wilcoxen can be reached at [email protected] or on Twitter at @Brandyn_2020. To stay up to date with all your southern Illinois news, follow the Daily Egyptian on Facebook and Twitter.