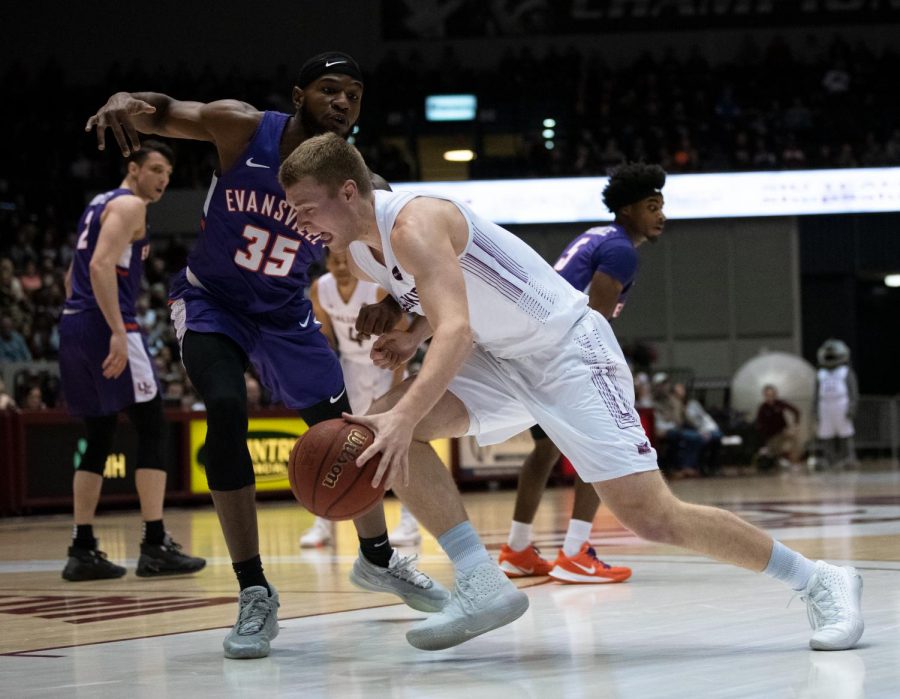 Southern Illinois University Saluki number one forward, Marcus Domask, runs for a basket basket during the basketball game against the Evansville Purple Aces in the SIU Banterra Center. The game ended 53 to 70 with SIU taking the win on Thursday night, February 20, 2020.

The game began as a tight contest, with SIU holding a slim lead that never exceeded five points. After a D’Amico three-pointer put the Salukis up 16-12, SIU went ice cold, allowing a 14-0 Drake run. The Salukis missed four shots and turned the ball over four times during this run.

Drake held a lead in the low double-digits for most of the half after this, but Muila and Brown combined for a six-point run to bring the halftime score to 35-27.

Coming out of the locker room, the Bulldogs could not buy a shot. Their 0-9 start from the field allowed the Salukis continue their run from the first half, eventually stretching it to 20-2 and giving SIU its first lead since halfway through the first.

Drake’s Garrett Sturtz, who scored 11 points in the second half, put a stop to the run and led a smaller comeback effort for his team, bringing it to a near dead heat at 42-41.

The teams would trade the lead eleven times in the final eight minutes of action. After Banks made two clutch free throws to pull the Salukis within a point with 3:21 to go, both teams combined for four missed shots and two turnovers in a scoring drought lasting until Domask nailed an and-1 jumper with 38 seconds left.

Domask missed the free throw, and a D’Avanzo foul with 23 seconds left would send Sturtz to the free throw line to shoot what would be the game-tying and game-winning free throws. On the game’s final play, Domask was heavily guarded, causing him to kick out to Banks too late for him to get a potential game-winning shot off.

The Salukis will finish their homestand on Wednesday, hosting Indiana State (8-8, 1-3 in MVC) at the Banterra Center.