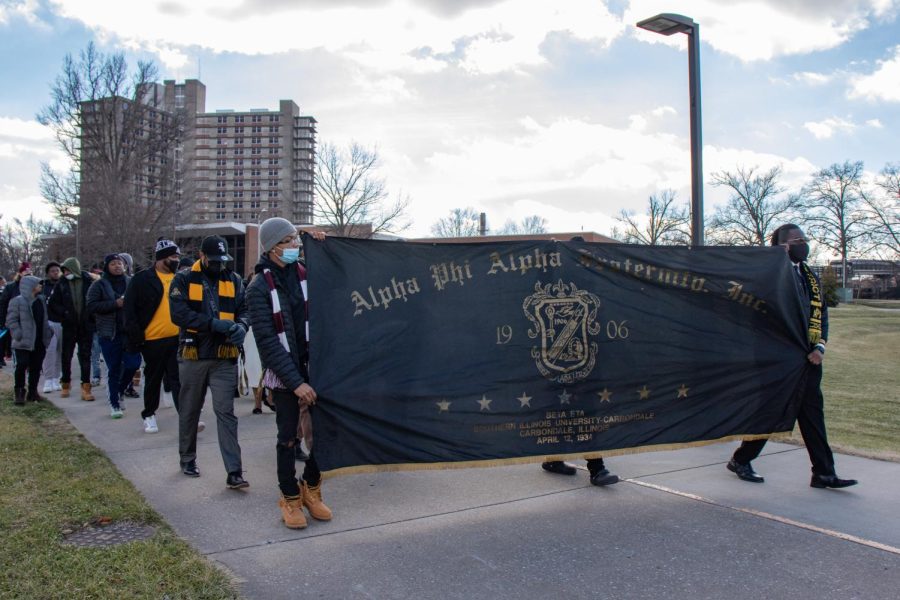 “This is our annual MLK March. We did this last year,” said Eric Banks, a graduate student at SIU and member of Alpha Phi Alpha.

Kevin Turner, president of Carbondale’s local chapter of Alpha Phi Alpha Fraternity Inc. said what the fraternity hopes to accomplish with this march is to show respect and to honor Black History Month.

“As a fraternity we’re trying to bring the community back to life. It has been low because of COVID,” Turner said

According to one of the organizers, there were about 125 participants in the march.

For the first twenty-five minutes marchers socialized, ate donuts, drank coffee and hot chocolate and listened to music on the speakers.

“This is Martin Luther King Jr’s birthday. Today we remember him, his legacy, his legacy of nonviolence and world peace,” said Camille Davidson, the Dean of Law at Southern Illinois University Carbondale.

Davidson said she moved to Carbondale in March of 2021 and was unaware of the annual event.

“I found out about this event this morning at the Scholarship breakfast and they said there was to be a march at 1:00, so I showed up,” Davidson said.

The MLK Scholarship Breakfast was held at the SIU Student Center from 8-9 a.m.

Davidson said she hoped the march would be a good opportunity for the students to reflect, and be reminded how far we’ve come, all the opportunities we have and the shoulders on which we all stand.

The marchers marched from Grinnell Hall to downtown Carbondale, made a loop and marched back to Grinnell Hall.

While they marched, the speakers played Dr. Martin Luther King Jr.’s I Have a Dream speech.

After all the marchers reassembled, there were five speakers.

Jeff Burton, the Vice-Chancellor of Student Affairs said 2022 would have been the 70th anniversary of Dr. King’s initiation into the Alpha Phi Alpha fraternity.

Burton said he remembered the time before there was an MLK Day holiday.

“For me, I do remember that Martin Luther King was actually a categorical point in Black History Month bingo. He was often classified as the good negro who had a dream,” Burton said.

Burton said MLK was the individual who was the antithesis of Malcolm X, who was labeled as the “national bad negro.”

“But because of time, and because of education, I know that while he was not perfect, Dr. King was an individual who sacrificed his life for the cause of uplifting humanity,” Burton said.

Burton said it is very important that we begin to read and understand where MLK came from and that he was not just a dream, he was so much more.

Speaker Paul Frazier, Vice-Chancellor for Diversity, Equity and Inclusion said he was inspired by all the Greek organizations and student leaders who came out to support the march.

“My brother talked about books to read. I’d also encourage you to read Jim Collins: Good to Great,” Frazier said.

Frazier said to the organizations that are built on service, today is their day to be great.

Frazier said those students still have the opportunity to serve as community leaders on campus.

Speaker Nancy Maxwell, the vice-president of the Black Chamber of Commerce in Southern Illinois, and the founder of Southern Illinois Unity Coalition said Black people in Carbondale are still shut out of features of the community.

“We hardly have Black anything here, at least not a brick and mortar. There are plenty of Black businesses down here and when we do the Black business expo at SIU in April, we have over 60 Black vendors here, but you know what they don’t have? They don’t have any storefront,” Maxwell said.

Maxwell said MLK opened the door and that’s how they got stuff started.

“And that door closed. When George Floyd died, that door got back open. You see that door had been closed with the death and incarceration of many Black leaders,” Maxwell said.

Maxwell said we have gotten too complacent, and segregation has been watered down. She said there is more closet discrimation and undercover racism.

“You know we can sit on a bus, we can go to any restaurant now and we can vote because slavery has turned into mass incarceration,” Maxwell said.

After the speakers finished, the floor was opened up to marchers and students.

Asia Esther, president of National Society of Colored Women’s Club (NSCWC) said MLK Day has been reduced to just a day off.

“Someone said that to me and it really stuck with me, and it had me thinking, this is another holiday,” Esther said.

Esther said while we may not be a family, we are a kind of family unified by the desire to make the world a better place.

“We all have the mindset that we want to celebrate MLK Day, and I really appreciate seeing everybody’s faces coming out to continue to make this a holiday, and emphasize that this is not just a day off,” Esther said.

“If you all decided to sleep in thirty minutes later today, this opportunity would have been gone,” Sanders said.

Sanders said to look into other black leaders like Malcom X and Kwame Ture.

“Look into how the Black Panthers actually started as a breakfast club feeding kids,” Sanders said.

The event ended with a student leading a prayer.

Staff reporter Joel Kottman can be reached at [email protected] and on Twitter: @JoelKottman