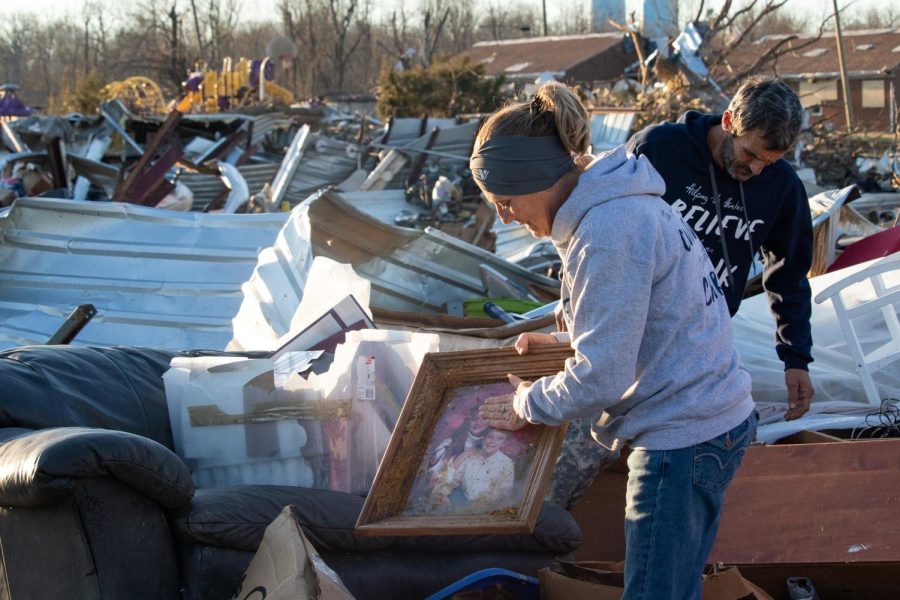 Cheryl Vincent clears off a picture of her and her son that was found in the aftermath of the Dec. 10 tornado Dec. 19, 2021 in Dawson Springs, Kentucky.

The walls and roof of a Kentucky storage unit had been torn off by the Dec. 10 tornado, stirring everyone’s possessions into a stew of mud, books, toys and furniture on the concrete slabs where the units used to stand.

On Sunday, Dec. 19, 2021, residents of Dawson Springs, Kentucky sifted through the rubble of the collapsed storage unit in search of any salvageable remnants of their belongings.

It was the last day people were allowed to search for their property before the units would be cleaned out and disposed of, so many, including Robert Evans and Cheryl Vincent spent the last daylight hours combing through piles of lost possessions.

When the tornado hit town, Evans and Vincent found shelter a mile away from the storage unit in a root cellar.

When describing the storm, Evans said, “She don’t take it serious ever. She’s gonna just ride it out…I said, ‘Look, it’s serious’…I didn’t know if we were going to make it to the root cellar, and I’ve been in one or two before…It puts the fear of life in you in a way that you don’t ever want to know.”

According to Evans, while he used to want to see the storm, all he could think of on Dec. 10 was to make it to the root cellar.

“I just wanted to get in that root cellar as quick as I could,” Evans said. “I found out the hard way, a long time ago, the same situation. I thought we’d ride it out. I just wanted to see a tornado so bad. I wanted to see it so bad, I just got to see it. When I was younger, I probably would have got in my vehicle and ran down [to the storage unit] just to see it, but after the other two, you realize that it is something you don’t want to see.”

While Evans and Vincent made it to safety, many of Vincent’s belongings were destroyed in the storm.

“This was just my extra belongings with my furniture as well, but I’ve lost it all. It’s sad. It’s very sad, and I can understand how other people feel because they’ve lost their homes and families, too,” Vincent said.

Also searching at the storage unit on Dec. 19 was Marvalyn Tolbert with her son and daughter-in-law, Todd and Kit Tolbert.

Marvalyn Tolbert had two very specific items she was searching for: her grandfather’s mailbox and her grandmother’s tea kettle.

The family first found the general area where the storage unit was located by spotting the old family stereo, but unfamiliar debris was piled high around what looked like the Tolbert property.

According to Marvalyn Tolbert, she found the mailbox quickly, but the sun was beginning to set on the last day they could search for her grandmother’s old tea kettle.

Todd and Kit Tolbert climbed on top of decaying chairs and half-broken desks to search for it. They lifted away old mattresses, wire bed frames, sheets of insolation, and scraps of metal until Kit Tolbert finally called out that she may have found something.

As the sun slowly met the horizon, Todd and Kit Tolbert uncovered what looked more like  a giant cauldron than a kettle. It was under a nightstand and cardboard boxes and brought out for Marvalyn Tolbert to see. With a smile on her face, she said it was, in fact, her grandmother’s tea service. It was beaten up and covered in mud, but it was found, and the Tolbert family was able to go home with two of their most precious belongings.

The family was unable to stop for an interview, however. For a distraught family in a destroyed town, there were simply more important things to do.

Photo Editor Sophie Whitten can be reached at [email protected] or on Instagram @swhittenphotography.