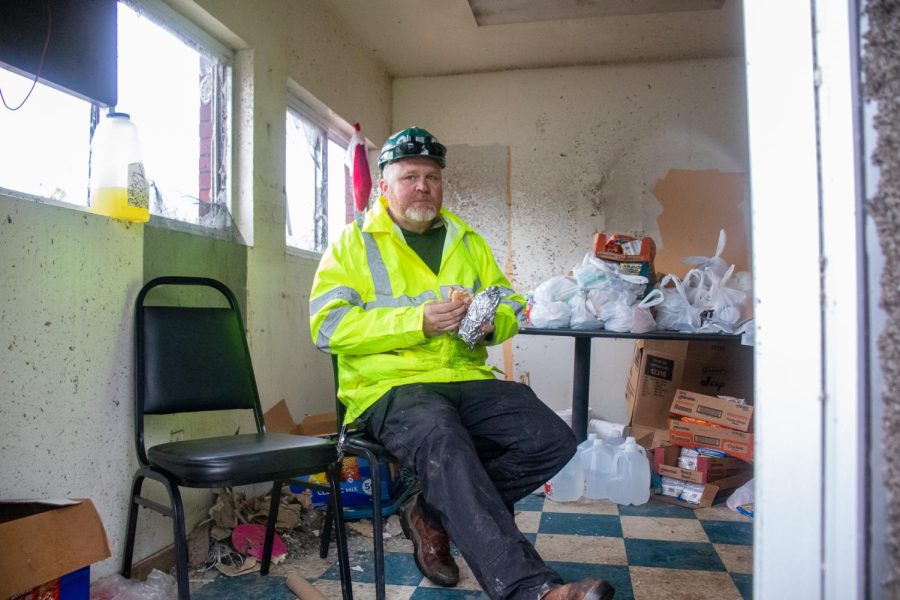 In the cold and miserable rain, Mickey Fowler worked tirelessly out of his restaurant, which had been torn apart by tornado damage, to feed the volunteers coming to Mayfield’s aid.

“I had a lot of food left here, so we took food out and we’re cooking it all for the community,” Fowler said.

The tornado that cut through Mayfield, Kentucky, on Friday, Dec. 10, left Fowler’s K&N Root Beer, along with many other businesses – and homes – , completely demolished. The south side of the restaurant was lost to the storm, and mud and debris was scattered across the floors and remaining walls, but the smell of warm meals still flowed out of the kitchen as Fowler and members of his church prepared food for the community.

Fowler had owned the restaurant for the past forty years and was working the night the storm hit town.

“We were working. We were running, operating. We were serving food, and I sent some of my servers home because I knew it was coming, and we were listening to the radio and TV, so the last [server] stayed with me and I sent [the others] on home,” Fowler said.

Fowler grew up in Mayfield and remained there throughout adulthood, working at his restaurant and pastoring a church, Pryorsburg Independent Bible Methodist Church.

“I’ve spent my whole life here. I’ve raised my family here, raised my kids, my grandkids. They all worked [at the restaurant] at one time or another, and kids all over the community have come to work for me,” Fowler said. “There’s no telling how many young people that have worked for me over the years. 40 years. A lifetime.”

According to Fowler, he locked the door just ten minutes before the tornado struck, and as he drove home, he could hear the storm flattening the town.

“I got out and locked the door, came around here, stopped and prayed and told God, I said, ‘God, you gave me this 40 years ago, just take it,’” Fowler said, tearing up. “And he did. He took it, but I got out. I was right about the edge of town when I heard it hit just behind me, and I knew it was gone.”

Fowler didn’t let the destruction of his business end his work in the restaurant. The Sunday following the tornado, Fowler asked his church to help him bring food to the town and the volunteers helping with the relief efforts.

“I said, ‘You know what? Let’s let our light shine and be the hands and feet of Jesus. Let’s go up here and cook this food and feed the community as best we can.’ So that’s what we’ve been doing,” Fowler said.

Fowler and his team have handed out more than a thousand sandwiches since they began serving them on Tuesday, Dec. 14, and the community has helped the team with their work along the way by donating food to cook and serve.

Fowler is now retiring from the restaurant business after the storm.

“I’m good with it. I’m seventy years old. I was ready to retire.”

Southwest of Fowler’s K&N Root Beer, Sarah Bryan cooked lunch over a propane stove on her front porch, her yard still inhabited by a downed power line, while buckets and totes surrounded the house to collect rainwater.

Bryan was at home with her husband and her dog when the tornado hit.

“The absolute scariest thing I’ve ever experienced,” she said.

Bryan and her husband decided to go inside and prepare for the storm. They unplugged appliances from the outlets, grabbed candles and flashlights, and put on shoes. Bryan said it then became “eerily quiet.”

“The wind stopped blowing and the rain stopped, and my husband and I were looking at each other going, ‘something’s up,’” Bryan said.

She said they had planned to stay in the bathroom because there was only one window and it was larger than the laundry room, which was windowless, but when the tornado hit, they decided the laundry room was safest.

“We were standing there and all of a sudden, it just got absolutely stone-quite. Like you could hear a pin drop,” Bryan said.

Bryan and her husband grabbed their dog and ran for the laundry room, hearing electrical pops from the power lines outside as they began to take shelter.

According to Bryan, it took about twenty seconds before they began to hear the tornado make its way through their home.

“I heard the door blow, and then we heard the glass break, and we felt the wind, and the house shook insanely, and then it was over,” Bryan said. “That was it.”

The three of them waited a few more moments before leaving the laundry room, only to find their house in pieces.

“Every window in the house is broken except for the living room, which is where we’re currently living. The bedroom was shaken up, completely flipped over […]  Stuff was dangling from the light fixture,” Bryan said.

However, the weather problems didn’t end with the tornado. The following day, the couple worked to insulate the house against the dropping temperatures by hanging tarps on the roof and strapping cardboard and aluminum foil on the windows to help reflect heat.

Bryan said, “The first night was really chilly because we didn’t have anything, and we were wet and we were out that night […] in the back, nailing up tarps and stuff in the middle of the night and pouring down rain, so the first night we were pretty awful.”

Help was not far behind, though. According to Bryan, a crew of volunteers that her husband worked with brought supplies the next day to secure the house, and people from around the community brought donations of food and water as well.

“We’re not local to Mayfield, but we have absolutely felt 100% local because everybody’s been absolutely fantastic,” Bryan said.

While the physical damage has been done, the emotional damage still takes a toll on the survivors of the tornadoes. Bryan, like many others, now face the trauma of the disaster and the emotional hardships stemming from the night.

Bryan said she couldn’t leave her home for the first two days.

“It took me two days to really get out of this area because I don’t think my mental health would have been able to do it,” She said. “I’ve been waking up pretty much every morning with cold sweats and panic attacks.”

A few days after the tornado, a severe thunderstorm came through Mayfield and Bryan said she felt as if she was reliving the storm all over again.

“The wind was blowing really bad,” Bryan said, “and you don’t think about it until you wake up and you’re in the laundry room and you’re not but that’s where your head’s at.”

Down the road from Bryan, George Rodgers remembers the night as an equally traumatic experience.

“They say it sounds like a train. It doesn’t sound like a train. It’s unimaginable, the sound. It’s something like you’ll never hear again. I don’t ever want to hear it again,” Rodgers said.

He, his wife, his sister-in-law, and his two dogs found shelter in a windowless room of their house when the tornado came through.

“It shook the whole house,” Rodgers said. “We thought it was coming in and I thought we were ready to go.”

Rodgers and his family made it safely from the wreckage with minimal damage to their home, but he said he never wants to relive the experience.

The tornado, while terrifying, has proven the town’s resilience. Volunteers line every corner and drive down every street offering help to those impacted by the storms, whether it be food, water, blankets, toys, shoes, gas, tool kits, or a pair of hands to sift through debris.

“I’m so proud of Mayfield, just how great we’ve all come together,” Bryan said. “We’ve got some really good humans here […] So that in itself, it’s worth everything. We’d be so much worse if we didn’t have a good community.”

Rodgers said he was amazed by the amount of donations and volunteers that have come to the town’s aid through this trying time.

“I’ve got to thank everybody that’s helped us and it’s amazing how much help we’ve had, and I appreciate it,” Rodgers said. “I was losing my faith in people for a long time. It was getting really bad, but this brought it all back. It brought all my faith back. We’ll get through it.”

Rodgers also offered advice in the form of a plea.

(Editor’s Note: If you have been affected by the tornadoes and are struggling with your mental health, contact the National Suicide Prevention Hotline at 800-273-8255)

Photo Editor Sophie Whitten can be reached at [email protected] or on Instagram @swhittenphotography.