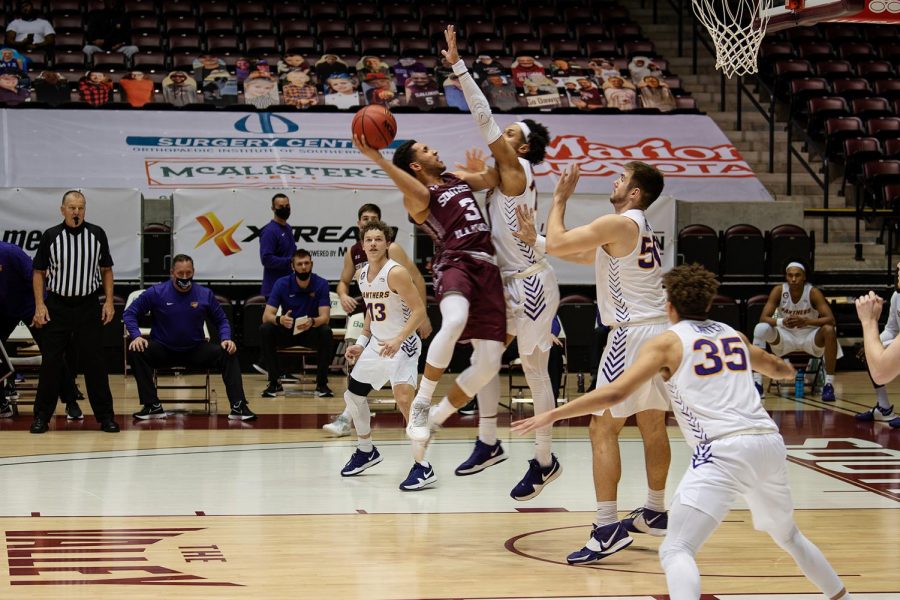 The Saluki Men’s Basketball team (7-4, 1-0 MVC) picked up another win Saturday afternoon versus the Maryville Saints (7-4, 2-1 conference). The Salukis controlled most of the game even without their leading scorer in junior guard Lance Jones. They earned a lead in the first four minutes of the game and never let go of that lead throughout.

It was an interesting look on the stat-sheet for the Salukis, as they totaled five different double-digit scorers, with not a single one being a starter on the day. Senior guard Ben Coupet Jr led in points with 16, while sophomore center Kyler Filewich and junior guard Steven Verplancken trailed behind with 12 and 11 respectively. Junior forward Marcus Domask and sophomore guard Dalton Banks rounded out the double-digit point totals with 10 coming from each.

Verplancken and junior guard Ben Harvey led the team in rebounds with six coming from each, Banks led in assists with six, and Coupet jr led in steals with two on the day.

A Coupet jr dunk kicked things off in a bright way for the Salukis to earn the first points of the game and after earning it back again with a Domask three-pointer at 5-3, they kept that through the rest of the game. After SIU began to pull away early at 14-7, Maryville slowly kept it coming when they managed only a two point deficit at 18-20 with only five minutes left of the half.

Although the Saints effort to get to that point was well done, the Salukis countered by earning the next five points off of a Filewich layup and a three-pointer by Banks, putting it back at a seven point Dawgs lead. A couple of shots later put it at 28-23 and from then, SIU went on a 9-2 run to close things out in the second half.

The start of the second half was when SIU really clamped down on the Saints, coming out of the gates on a 14-2 run to give them a 24 point lead less than five minutes into the second half at 51-27.

The Men will continue their season next Wednesday, December 22 with a road trip to San Francisco with a 4 p.m central time first-tip, looking for their third win in a row against the Bulls.