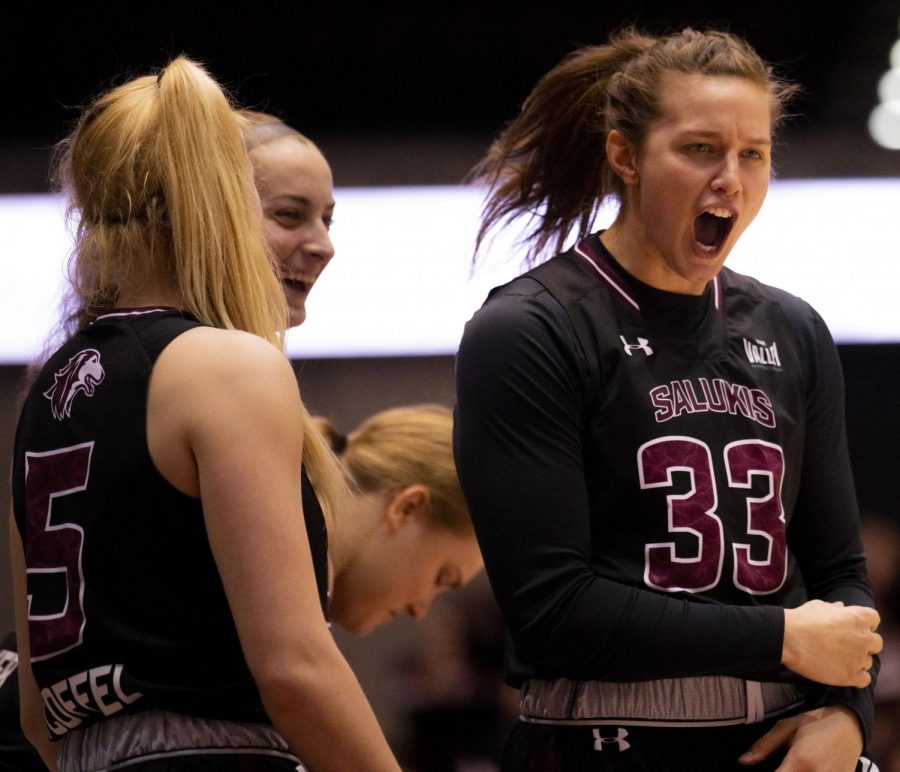 Rachel Pudlowski and the rest of the Salukis bench gets fired up during the game vs. the Redbirds. The Salukis would go on lose 62-54 to Illinois State on Friday, Jan. 31, 2020 in the Banterra Center.

The SIU Women’s Basketball team traveled to neighbor and close rival, Southeastern Missouri State to take on the Redhawks Tuesday night. The Salukis earned their first win of the young season by a final score of 78-61.

The Salukis were highlighted by a total of four double digit point performers in graduate student point guard Makenzie Silvey, graduate student forward Gabby Walker and Abby Brockmeyer, and sophomore point guard Quierra Love. Silvey led the team in points, assists, and blocks on the night with 21 points, eight assists, and two blocks. Walker wasn’t far behind in points with 19 and went 8-9 on field goal attempts, while Brockmeyer and Love topped it off with 14 and 10 of their own points. Love also led the team in steals with three.

Adrianna Katcher also had a strong performance. Katcher led the Salukis in rebounds with eight and also put up four points, three assists, and two steals all in only five minutes of play time.

The first quarter went back and forth at first, with eight ties or lead changes in the first four minutes of play. A jump shot by senior guard Caitlin Link put the Salukis up 11-10 at the 5:47 mark. That started a 16-6 run to end the first quarter with SIU leading 27-16.

The run continued for SIU, with another similar run starting out the gates of the second quarter. The Salukis earned themselves a 13-6 run to put themselves up by 18 at 40-22. After a free throw and a layup by SEMO, the Salukis marched on yet again and finished the first half with a 19 point lead at 46-27.

The lead for SIU only grew bigger once the second half began as SIU earned the first eight points before SEMO earned their first basket of the half. SIU earned their largest lead of the day of 26 after two free throws by Katcher to make it 54-28. The teams shared layups before SEMO ended the third quarter on a 12-3 run to lighten the deficit, yet SIU still had a comfortable lead 59-42 when the fourth quarter arrived.

SEMO kept fighting and cut the deficit to 14 with just over six minutes left in the game, but it was just too little too late for the Redhawks as SIU kept marching on to a 78-61 final.

The Salukis will continue their season this Friday with a trip to Macomb Illinois for the Compass Challenge tournament. They’ll face the Eastern Illinois Panthers in round one of that tournament on Friday with a 4 p.m tip-off.