Not Done Yet!: Salukis beat South Dakota in the first round of FCS Playoffs, 22-10 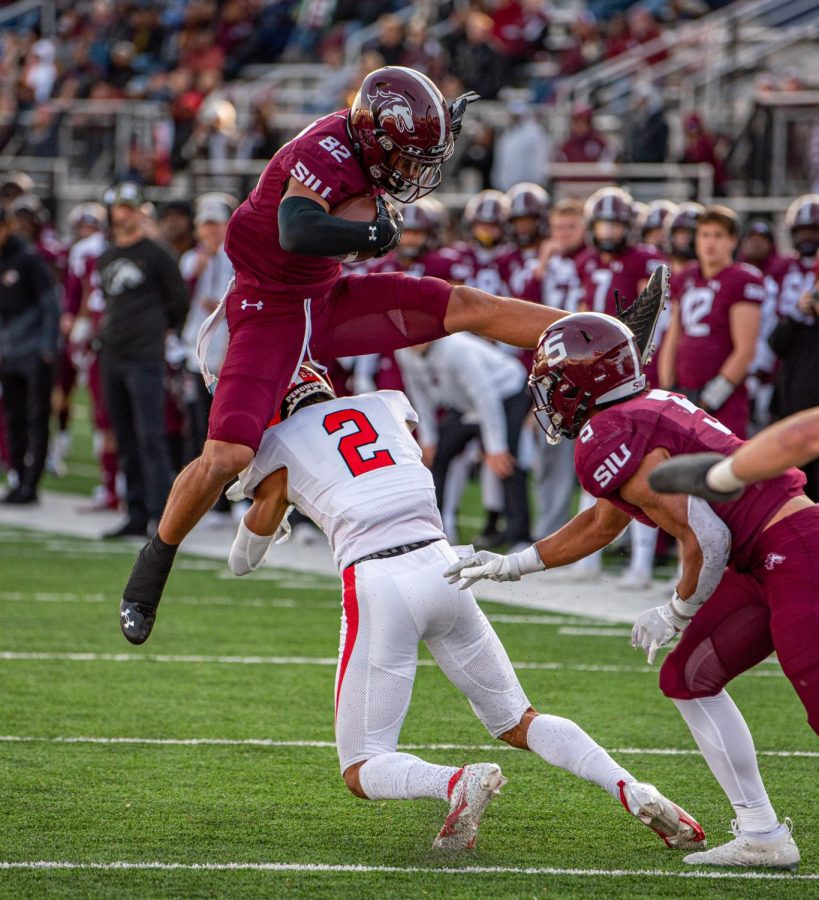 SIU managed to get the victory on the road 22-10 to move on to the second round of the Football Championship Subdivision Playoffs.

South Dakota received the ball to start the game. However, the Salukis gained possession quickly, after an interception by senior safety Qua Brown with 13:52 left in the first quarter.

The Salukis used the turnover to score the first points of the game and go up 3-0. Senior kicker Nico Gualdoni kicked the field goal from 50 yards out with 8:01 left in the first quarter.

The following drives from both teams proved to be unsuccessful, as multiple punts occurred. That is, until 8:06 left in the second quarter when Southern Illinois gained a larger lead, 10-0.

SIU put up its first touchdown of the game with a 3-yard touchdown pass from sophomore quarterback Nic Baker to junior wide receiver Avante Cox.

Both teams continued to struggle on offense, as the defenses managed to continually get stops on their opponents.

SIU broke this routine with its last drive of the first half. After a trick pass from junior running back JaVon Williams to senior wideout Landon Lenoir, Gualdoni kicked in a 26-yard field goal to take a 13-0 lead as the clock expired.

At halftime, the Salukis held a commanding two-score lead. Senior defensive end Jordan Berner said he was proud of the defense’s performance on the field.

“Credit to the defense, but also credit to the offense. They put us in good spots today. They ate up a lot of the clock to give us a breather,” Berner said.

South Dakota’s offensive efficiency increased dramatically to start the second half. The ability to gain momentum in their run game helped the Coyotes score on their first drive out of the break.

Senior kicker Mason Lorber hit a 21-yard field goal to get the Coyotes on the board with 7:55 left in the third quarter.

The Salukis answered with an impressive offensive display of their own. After a 44-yard pass from Baker to Cox, Gualdoni kicked in his third field goal of the night from 41 yards out.

The Coyotes began to march down the field, hoping to cut the deficit and score their first touchdown of the game.

With eight yards to go for a game-changing score, SDU Freshman quarterback Carson Camp lofted the ball into the endzone, where Brown made his second interception of the game at the two-yard line.

Although the Salukis didn’t score on the drive after the turnover, this interception made the Salukis lead feel insurmountable to the Coyotes. The momentum of the game shifted more and more towards the Salukis.

The interception became increasingly helpful as South Dakota scored its first touchdown to close the gap with 8:50 left in the game. The touchdown was run in by freshman running back Travis Theis to make the score 16-10, Salukis in front.

On the Salukis’ next drive, Baker launched the ball to Cox again, which was completed for a 49-yard gain. The long throw helped set up a touchdown run by sophomore running back Romeir Elliott, which gave the Salukis a 22-10 lead with 6:16 left in the game.

The momentum was entirely with the Salukis after junior safety Clayton Bush made an interception with 5:29 left in the fourth quarter.

Camp had yet another turnover with 2:11 left in the game, which was a fumble after an impressive run. No amount of hope was left in the SDU fans’ hearts after the disappointing play.

Head Coach Nick Hill said the turnovers and the Saluki’s defense were big factors in helping the team get the win.

“The turnovers were such big ones. And making them kick a field goal when it was 13-0. It’s completely different there if it ends up being 13-7 then,” Hill said, “That was huge and then we came back to get points again.”

The Salukis ran the clock out until the Coyotes got the ball back with a minute left in the game. South Dakota didn’t manage to score when the final buzzer sounded, which meant the Salukis had pulled away 22-10.

Baker and Cox’s connection on the field was the highlight of the game as Baker finished going 21/30 with 210 yards and one touchdown. 148 of those yards were thrown to Cox and the touchdown belonged to him as well.

Hill said Baker’s performance was instrumental to the team’s victory.

“It was huge. He was efficient, stuck to the game plan and didn’t try to force things,” Hill said.

On the defensive side, Brown took out all of his anger from last week’s disappointing performance and put all he had into this playoff matchup. Brown finished with six tackles and two interceptions.

“Honestly feels a lot better this time, especially coming off a loss last week. So we’re looking to build on this and get another win next weekend,” Brown said.

SIU will play North Dakota State next Saturday, Dec. 4 in the second round of the FCS playoffs. The contest will take place on the Bisons’ home field, in the Fargodome.