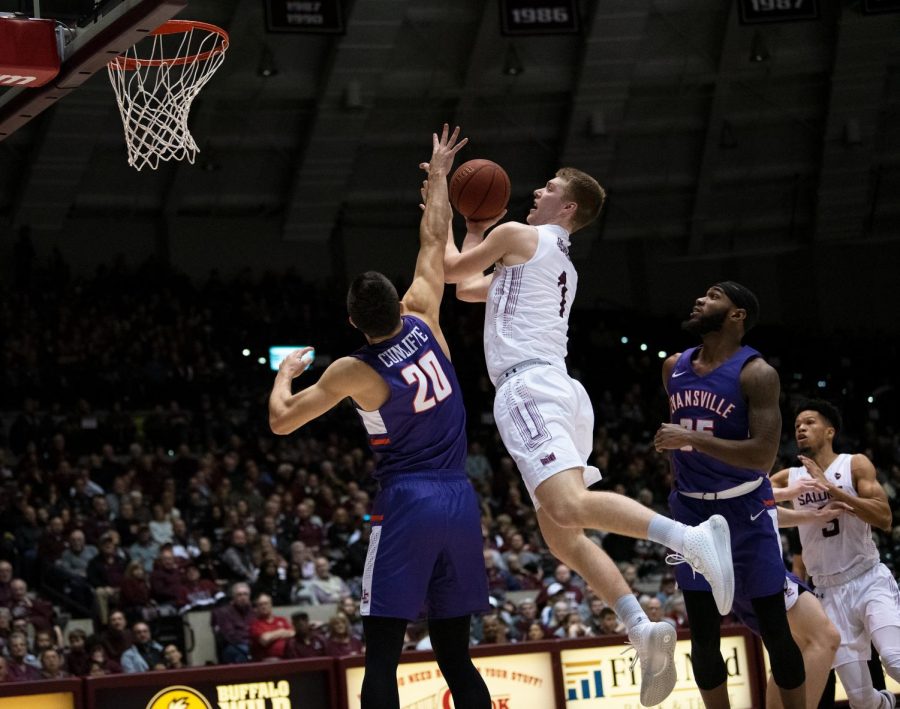 Southern Illinois University Saluki number one forward, Marcus Domask, jumps for a basket basket during the basketball game against the Evansville Purple Aces in the SIU Banterra Center. The game ended 53 to 70 with SIU taking the win on Thursday night, February 20, 2020.

In the semifinal of the Paradise Jam basketball tournament, Nov. 21, the Salukis played the Northeastern Howlin Huskies and lost 59-47. This loss came after Southern Illinois upset Colorado in the first round.

Despite the Salukis getting the tip, Northeastern was able to get the first basket of the game with a turnaround hook from junior forward Chris Doherty.

The Huskies got themselves on the board early, when they jumped out to a quick 11-2 run in the first 5 minutes. This run forced the Salukis to take their first timeout of the game at 14:52.

Junior guard Lance Jones responded from the break with a running layup and senior forward Ben Coupet knocked down a three-pointer to shrink the margin. The score became 13-7 by the second media timeout, with the Huskies in the lead.

At this point in the game, it became clear Northeastern’s defense was giving SIU fits all over the court. The Huskies held the Salukis scoreless for two and a half straight minutes, which was only broken with two free throws by junior forward Marcus Domask.

Luckily for the Salukis, their defense was also giving Northeastern trouble, which helped the Salukis stay in the game as they only trailed 16-9.

Jones put the team on his back on both the offensive and defensive end, which helped the Salukis close the margin to just one point, 20-19, with 59 seconds left in the half.

After a free throw by Coupet, the Salukis evened the score heading into the half at 20.

Jones started the second half by putting in a layup from the left side of the basket at 19:42 in the second half. The defense continued to dominate until the first break, the Huskies led 26-23 with 15:50 left in the game.

The two teams traded baskets until the second break at 11:51 left in the game. Northeastern stayed in control, 30-27.

Both teams started to figure things out on the offensive side of the ball as Northeastern jumped out to a minor lead. However, after two threes from junior guard Steven Verplancken and Domask’s first bucket of the game at 8:58 left in the second half, it was 39-35 with the Huskies still on top.

With 3:49 left in the game, Northeastern jumped out to their biggest lead of the contest as the score became 46-39. The Huskies made an adjustment to put Doherty into a pick-and-roll set on the right wing. The Salukis didn’t have an answer over those three minutes before the media timeout.

Northeastern finally had enough to shut down the Salukis after the break. A couple of impressive baskets by the Huskies put SIU down 54-45 with just a minute and a half left in the game.

Northeastern ultimately came out on top, 59-47. Senior guard Shaquille Walters led their team to the victory as he totalled 20 points and nine rebounds.

Jones carried the Salukis in this contest on both sides of the ball. He led the game with 21 points and led SIU with three assists while also grabbing three steals on the night.

The Salukis will play in the Paradise Jam third place game on Monday, Nov. 22, at 4:45 p.m. They will be facing off against the Creighton Bluejays.