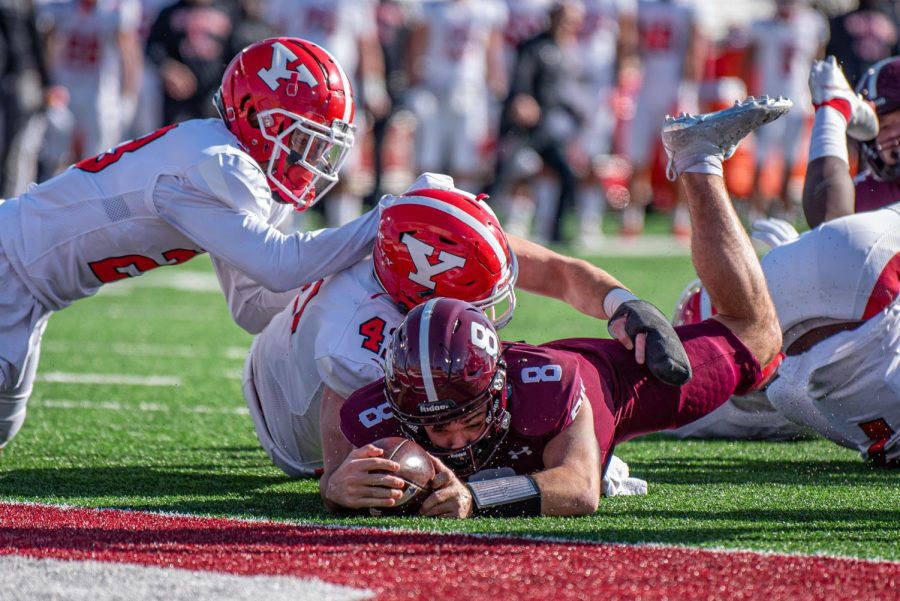 SIU quarterback, Nic Baker, runs the ball and makes a dive towards the end zone, but would be short during SIU's 18-35 loss vs. Youngstown State during Senior Day Saturday, Nov. 20, 2021 at Saluki Stadium at SIU.

In their final game of the regular season, SIU lost a playoff clinching match against Youngstown State 35-18. Had SIU won the match, they would have clinched a bid in the playoffs, however, a loss puts their playoff dreams in doubt as they await selection Sunday to find out if their season will continue.

Some bright spots for SIU included sophomore running back Justin Strong, who was easily the highlight of the Salukis offense on the day. Strong accumulated 107 rushing yards on nine carries that included his longest play, a 67 yard rush in the second quarter to set up SIU’s first touchdown of the day. Strong also helped out in the passing game, with 18 yards off of two catches, with one of them being a touchdown to finish the first half.

Sophomore running back Javon Williams Jr also contributed for the offense today. Williams totaled 72 rushing yards off eight carries and his own rushing touchdown in the second quarter. However, a fumble by Williams early in the first gave the Penguins an early opportunity to go up two scores on the Salukis.

Sophomore quarterback Nic Baker, didn’t have the best day for himself. Baker only had 126 yards passing on the day off 11 completions on 34 attempts for a low 32% completion percentage. Baker threw a touchdown pass and two interceptions in the process as well.

SIU would like to forget the way that the game started off with. The Salukis had a quick outing for their first drive, ending in a punt, while YSU drove down the field on a 12-play drive for the first score of the game. The Salukis got the ball back but a fumble by Williams gave the Penguins great field position early and an opportunity to go up two scores early. YSU capitalized on the opportunity after just two plays and SIU was in a hole early down 14-0. An 8-play Saluki drive produced a field goal to give SIU some life as the first quarter ended 14-3.

A YSU drive continued into the second quarter as they led a 16 play drive to go up 21-3 early in the second quarter. SIU finally responded with a touchdown of their own on the second drive off William’s 1-yard touchdown run, but Youngstown State kept it to a 3 possession game with a touchdown on the next drive, making the score 28-10 with two minutes left of the half. SIU got back in the contest with a quick drive to finish the half with some momentum. The 11-play drive was capped with Baker’s lone touchdown pass to Strong with 33 seconds left. The Salukis converted the two-point conversion and went into halftime down 28-18 with some hope still on their minds.

Only one touchdown would be scored in the entire second half as YSU scored on their first drive coming back, making it a three score game once again at 35-18. A stalled drive by SIU and a stop on fourth down in the red-zone followed the Saluki offense throughout the third quarter and prevented SIU from lessening the deficit before the final quarter began.

An SIU fumble recovery to start the fourth quarter gave the Salukis some life. Baker threw a touchdown to junior tight end Tyce Daniel, but a pass interference penalty took the touchdown back and Baker threw an interception in the red-zone on the next play, failing to convert on their opportunity after a Penguin turnover. The defense stopped the Penguin offense quickly to give SIU the ball back, but the offense still could not convert for a touchdown after getting all the way to the Penguin 3-yard line. At this point, it was too little, too late for SIU, and the Penguins upset the Salukis with a final score of 35-18.

Head Coach Nick Hill spoke after the game on what he would say to the playoff committee about the Salukis.

“Well I think if you want to put in a team that, I think they (The playoff committee) know too who can make a run and not just get in the game, to get in the tournament, I believe that every team in the country knows we can rattle off a few wins in there as well,” Hill said.

The Salukis playoff hopes will remain in the air while they wait for selection Sunday.