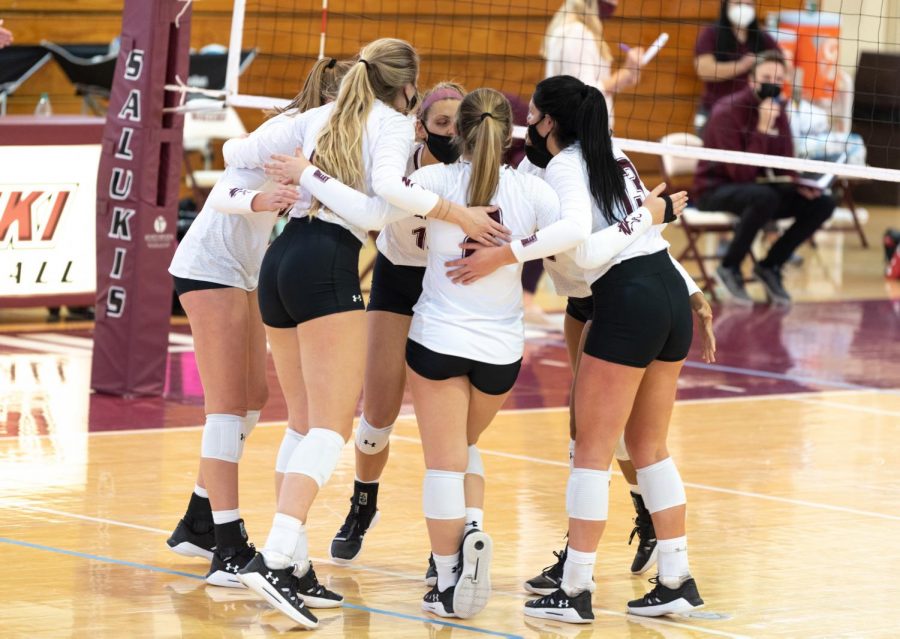 SIU Women's Volleyball players form a circle to cheer up and plan a tactical move to get level with the opponent team from Loyola University on Sunday, Feb. 7, 2021, in Davies Gym at SIU. The Salukis went on to lose in all three sets with score lines of 22-25, 13-25 and 17-25.

The Salukis took on the Evansville Aces on Friday, Nov. 19 in a Missouri Valley Conference matchup. The Aces came out on top in three sets.

Southern Illinois kept it close until the middle of the first set where the Aces jumped out to a 17-12 lead. Evansville never looked back and went on to win the set 25-19.

The Aces jumped on the Salukis from the start in the second set. Despite a late comeback by the Salukis, Evansville kept their opponent down and won 25-18.

In the final set of the night, the Salukis did their best impression on the first set. They managed to keep it close until Evansville jumped out to an 18-11 lead.

Sophomores Alex Washington and Tatum Tornatta led the Salukis in kills, both with nine. Freshman Anna Jaworski had 15 assists on the night as well.

The Salukis play their last matchup of the season on Saturday, Nov. 20 against Indiana State at 5 pm. SIU will host their last chance to get a conference win this season.