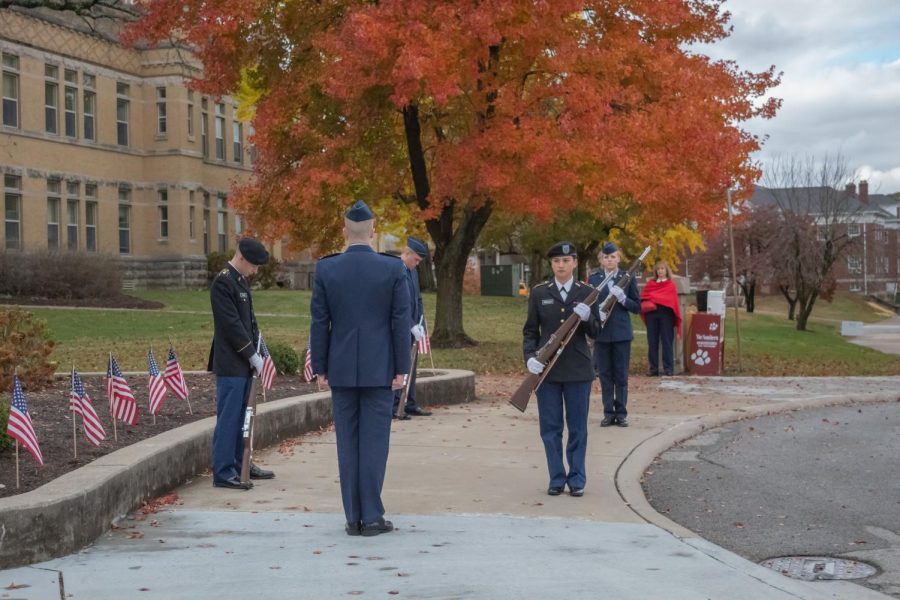 ROTC students switch out for 15 minute shifts at the Veteran Day silent vigil Nov. 11, 2021 at SIU in Carbondale, Illinois. “Basically, we have guards standing out and sitting in front of the US flag. As well as a wreath that we have, which represents all branches of the military as well as prisoners of war and those missing in action presented by our POW MIA flag,” fourth year cadet, Rebecca Singer from Airforce ROTC, said.

17At 6:30 a.m. on Nov. 11, 2021, the cadets of Southern Illinois University’s ROTC program started their silent vigil to commemorate Veterans Day and honor those who have served in the military, past and present.

Second year cadets Ben Konvalinka and Angelo Weyer of the Air force ROTC at SIU were among the many people who helped bring this event into fruition.

After a brief pause of the annual event due to COVID-19, SIU’s Airforce and Army ROTC cadets organized to bring it back this year. While in the past the vigil has been a 24 hour affair, it was shortened last year due to COVID 19 precautions and this year due to a shortage of students in the ROTC programs according to Konvalinka.

This year is the 40th anniversary of the vigil and it lasted from 6:30 a.m. to 5 p.m. at the Old Main Flagpole near Woody Hall.

“The vigil is a pretty important event for us. What we were really hoping for and did get quite a bit of was a lot of community outreach. We wanted a lot of people from around Carbondale to come and see us but most of all, we really wanted to show our support for the veterans that have come before us and basically honor them and show how much we care about them,” Konvalinka said.

Cadets from the ROTC programs took 15 minute shifts in twos to stand before the Old Main Flagpole at a parade rest. Many people and their families came to watch the silent vigil.

Fourth year cadet, Rebecca Singer from Airforce ROTC, said, “They hold rifles and they stand at a parade arrest, which is a modified form of attention, just looking down at the ground just to think for about 15 minutes, stand and honor those before, and then we have a new guard come in and they switch off.”

At 11 a.m. there was a wreath laying ceremony held on the second floor of Davies Hall where people came to listen to the speakers such as Carbondale’s Mayor Mike Henry and SIU provost, Meera Komarraju.

“We decided to bring back some of our guest speakers. People who have spoken with us before. That being  Mayor Mike Henry, Mr. Paul Copeland, who was a retired United States Air Force Lieutenant Colonel, and this year we put a few changes into it as we’ve invited our provost Meera Komarraju with us,” Weyer said.

“We’ve not had a ceremony in the last two years and particularly last year was due to the pandemic. This is something that we’ve wanted to get back up and running,” Weyer said.

Konvalinka said that the programs will continue the annual tradition and they hope to build on it and add more to the ceremonial traditions in the future.

Photographer Dominique Martinez-Powell can be reached at [email protected]. To stay up to date with all your southern Illinois news, follow the Daily Egyptian on Facebook and Twitter.