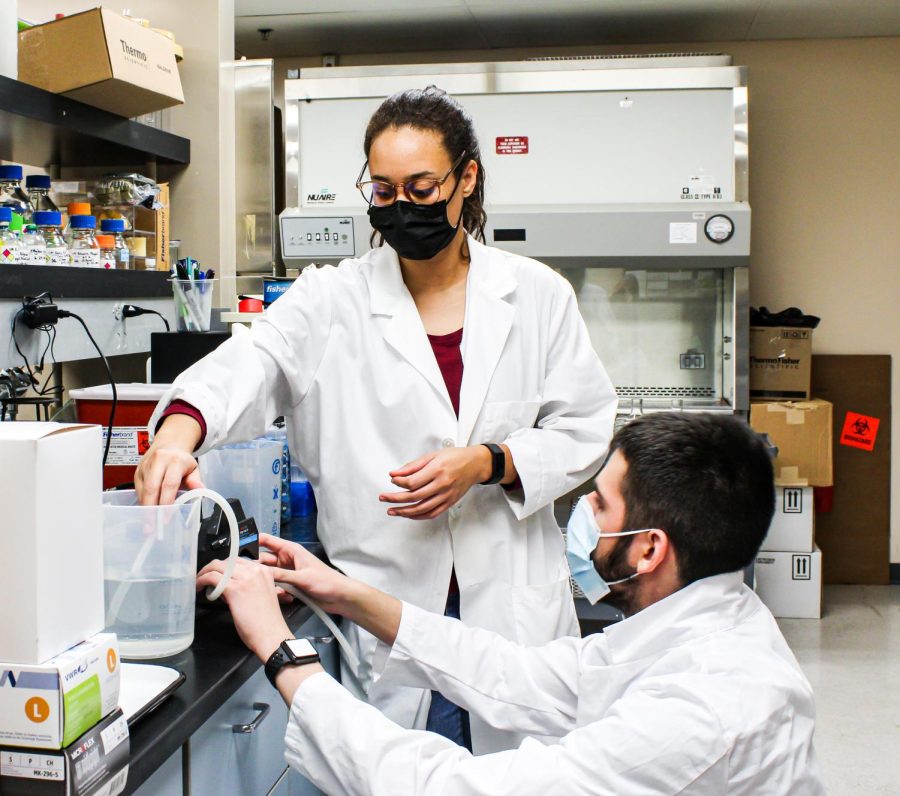 Zachary Gutenkauf and Jennifer Pierce start research as part of the SIU research team that helps to feed astronauts in Life Science III at SIU Nov. 8, 2021 in Carbondale, Illinois. “This is a multidisciplinary team requiring many specialties. Currently we are in phase one, which is the NASA proposal phase. We are waiting on the phase two ‘rules’ for proof of the concept, which are anticipated to be revealed tomorrow at 10am on NASA TV [Tuesday November 9, 2021]. Once we know the rules for phase two, then the game is afoot,” director of the coal and energy research and a professor in geology, Ken B. Anderson, said.

NASA has selected 23 other teams across the globe to participate as well and receive $25,000 for phase one of the challenge to  design the prototype.

Professor  Lahiru Jayakody leads µBites and is assisted by other faculty  from various departments including microbiology, biochemical science, geology, physics, and biomedical engineering.

“Right now what we have is the design at a conceptual level,” Jayakody said.. “So, we need to build up a prototype. I believe it’s going to happen next summer because phase two is developing the prototype and the food out of the system, and showing it’s working right.”

Jayakody said this is a new study astrophysicists are looking at as they work towards explorations to Mars.

“This is a different [way of] thinking going into real food,” Jayakody said. “Some people try to make protein, [and] that’s it. We try to go beyond that.”

Scott Hamilton-Brehm, assistant professor of microbiology, said he’s using his expertise on microbes to form a system where they can make food.

“One of the things we have to do is treat this like an environment in which you have to have a reactor, and grow the microbes using something to make food,” he said. “My part is dealing with pumps, and being able to control a microbial system so that you can use it for industrial practice such as food.”

Hamilton-Brehm said their way of going about the challenge is novel compared to their competitors like the Interstellar Lab in Los Angeles, using plant growth science, or the KEETA team in Bangkok, using bio culture.

“The process is really start to finish,” Hamilton-Brehm said. “You have to have the raw materials. The raw materials have to be processed [in a 3d printer], and, then, at the end, you have to get a product that’s edible.”

The winning team’s project would also be able to make food production easier in scarce environments, and the team thinks it will be great both for space exploration and Earth.

“Imagine if we put the full force of a company behind us, and you make this into a device,”  Hamilton-Brehm said. “You can bring it to any war-torn area or highly devastated [area], resource wise, and you just feed it garbage carbon and it starts printing food for everyone. It doesn’t have to be out in space. It could be a huge benefit here on Earth.”

“Lahiru takes that, and feeds that to his genetically engineered microbes… They convert all that into something usable,” Anderson said. “You take the waste, break it down, feed it to the yeast, [and] the yeast turns it into the product which can then be turned into food again.”

With a spacecraft being a closed area, all the wastes produced with the ship could all help produce foods, Anderson said.

If µBites wins phase one they could win around $500,000. Phase two has not yet been announced.

µBites is confident in their project with the challenge, and will stick together throughout all the phases if they progress.

“SIU’s not big enough to work on every problem that there is,” Anderson said. “But the problems that we choose to work on [we’re] second to no one.”