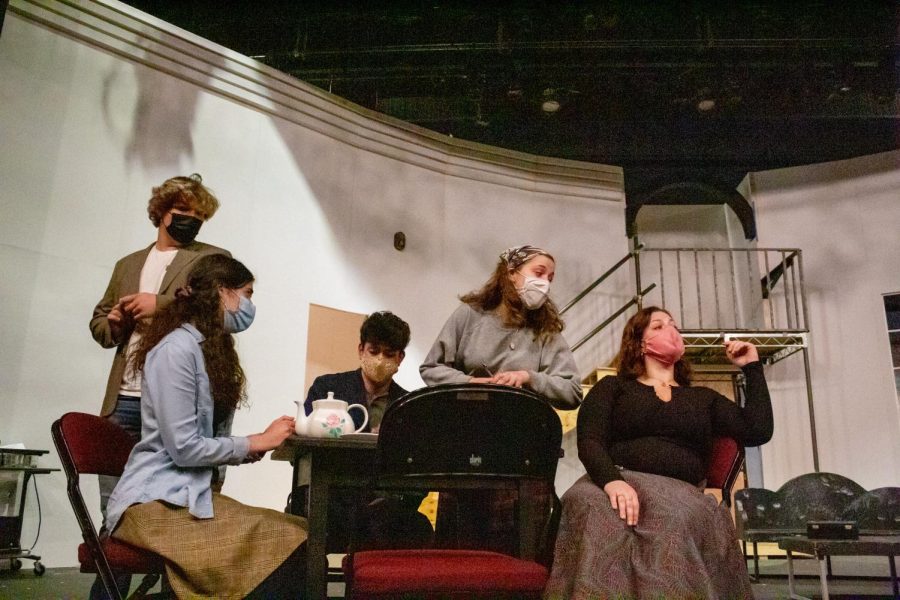 Students practice their performance for the play, “Hay Fever,” at the McLeod Theater Nov. 11, 2021 at SIU in Carbondale, Illinois. “It's a comedy, of course I want people to laugh. But I'm confident in my cast. I'm confident in my design team and their ability and what they've put forward in bringing this production to life,” Director Rion Towery said.

Rion Towey decided to do Hay Fever, a comedy play, to provide people with just a few nights to enjoy a show and relax.

Southern Illinois University Carbondale theater department is putting on the play Dec. 2-4 at 7:30 p.m. and Dec. 5 at 2 p.m. at McLeod theater.

Towey said  with  the political polarization of the country, he wanted to bring people together.

“In light of what’s been going on these three years with the pandemic and the political climate in this country, I wanted a play that would make people laugh,” Towey said.

Towery said everything from the set, costumes, and props were done in house.

Amanda Talor, who plays Judith Bliss, one of the main characters, said she is excited to be back on stage and hopes everyone gets to see all the hard work that went into Hay Fever.

“It’s just really cool to see everyone who’s been working on it, whether that’s costuming, lighting sets or anything else,” Talor said. “It’s all just coming together,”

Gillian Coruz, who plays Judith’s daughter, Sorel, said the audience will enjoy the show because it’s about family.

“They share a lot of experiences together which I can relate to,” Coruz said. “Fighting with your brother, I relate to that a lot, and Sorel does that a lot in the show.”

While some of the actors are excited for the play it has been an adjustment for others.

Carter Reed, who plays Judith’s son, Simon, said it has been an adjustment for him from doing musicals to a comedy.

Mitchell Brandon, who plays Sandy, a guest of the Bliss family, said it is easier for him to get into his character’s personality.

“I’m pretty outgoing, but sometimes I do get a little nervous, and that gets shown through the character,” Brandon said. “He’s just very goofy. I think I’m very goofy so it’s easy to tap into.”

Uriel Achillieus, who plays Richard Greatham, a diplomat invited by the Bliss family, said this play will give the audience a chance to escape from pandemic worries.

“I think that given all the things that have happened in the past two to three years, people want a good laugh,”  Achilleus said. “I think people just want fun entertainment, and a lot of people really, really still love theater,”

Abree Jean, who plays Mayra Arendelle, another guest of the Bliss family, said people need to attend shows like this one if they want live theater to survive.

Tickets for the show can be purchased the day of the performance.

“I am hopeful that people will have the desire to get back to supporting their local theaters, and theater in general, because I think it’s time,” Towery said. “People want to have a laugh and be entertained and get back to some sort of normalcy.”