Trees vs Dawgs: SIU Football looks to get back on track after back-to-back losses 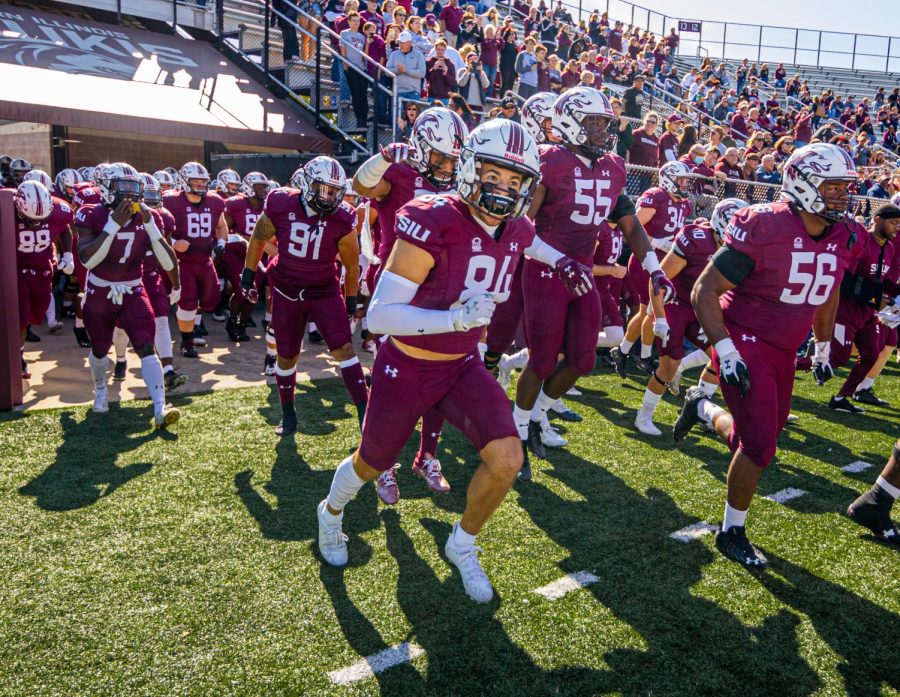 SIU wide receiver Hunter Milligan, middle, runs onto the field with the SIU football team during the Homecoming game on Saturday, Oct. 16, 2021 at Salukis Stadium at SIU.

After losses to Northern Iowa and Missouri State at home, SIU’s football team will look to get back on track this upcoming week with its final road game of the regular season against the Indiana State Sycamores.

The losing streak marks the first back-to-back losses in a row, since March 20 and 27 of last season, when the Salukis lost to South Dakota State and Missouri State. Another loss this week would make the longest such losing streak since the 2019 season.

In his press conference on Monday, Coach Nick Hill said the team’s experience will help it get back on track.

“Every season is going to have some sort of adversity or things that might not go exactly as planned or the way that you want it to, but ultimately your season is about how you respond and get back on track. It’s not the first time this team has been in this position,” Hill said.

With these tough times happening in Saluki football right now, it could be easy for some of the players and coaches to feel unenthusiastic about their game this weekend, but Hill said the players are still as eager as ever.

“It’s not too tough to keep these guys motivated. Everything we want to do is in front of us,” Hill said “We’ll be ready to play just like the last two weeks, we just haven’t executed in the critical moments. There’s a lot of sixth year seniors that lead this team, so motivation isn’t an issue at all.”

A win in these next two games against Indiana State and Youngstown State would give SIU a 8-3 record to end the regular season, the best for the Salukis since the 2009 season, in which SIU went 10-1 during the regular season.

With expectations continuing to get higher with each and every win the Salukis tack on this year, the players might begin to feel more pressure heading into these final regular season weeks and the playoffs. Freshman defensive end Richie Hagarty said the team is feeling level.

“We are composed and cool. Our team chemistry is to bounce back from whatever adversity we have and to come back better and stronger. But overall, we obviously need to stay more committed and focused than we were before considering the two losses,” Hagarty said.

Hagarty, a huge acquisition for the Salukis in the offseason, also said he doesn’t think the routine in practice will change based on the two losses.

“We haven’t had a bad week of practice. We’ve been practicing really well in everything we’re doing. We probably need to take coaching a little bit better and, like I’ve been preaching, to have better focus. All we’re thinking about is Indiana State and taking things week-by-week,” Hagarty said.

The two losses coincidentally came just after SIU’s bye week after a homecoming game on Oct. 16 against North Dakota. There was a question as to whether the bye week had something to do with some of their recent struggles, but the players think differently. Senior running back Donnavan Spencer said it has actually done the opposite for the team.

“We’re not using the bye week as an excuse. We got a lot of guys healthy off of that so it was a helping point for us. We just need to get back to where we used to be. We had some slumps of not being able to finish, but it isn’t coming from the bye week, it’s us doing our part on both sides of the ball,” Spencer said.

Bye-weeks generally help teams and Indiana State is coming off of their own bye week before this game against SIU. Spencer said the team realizes the Sycamores just had that extra week off, but they aren’t overly concerned.

“Coach mentioned that all throughout the week, but it wasn’t something for us to worry about. We know what we have to do and execute when we go over there. We know we have to play that complete game that we set our mind to do,” Spencer said.

The past few weeks, the team hasn’t had a strong start in the second half. Two weeks ago against UNI, the Salukis allowed a quick touchdown drive by the Panthers, which  tied the game at 13 early in the third and SIU couldn’t get anything going on offense in the drives following during the third quarter. The week after, the Salukis’ offense was halted either at midfield or within their own 30 yard line each time they received the ball in the third quarter.

Spencer said the Salukis need to improve in the second half to win these final games.

“Coming out flat in the third quarter has really cost us both of these games. I feel like if we improve coming out of halftime, our chances will be better. We can’t make stupid mistakes on offense with not taking care of our gap schemes and stuff. We just got to execute as a full team,” Spencer said.

Hagarty has his own idea of how SIU is going to end up winning this game.

“Undoubtedly we need to stop the run. That’s every week. Forcing them to third and long, forcing them to third and mid, we have to force them into those stressful situations to be able to get after the quarterback and make big plays, have turnovers, and give the offense the momentum it needs to get rolling and everything going for them,” Hagarty said.

Hill said the players are excited for the games ahead of them.

“We get an opportunity to go on the road against an Indiana State Team that’s a good football team and we’re going to do everything we can to get back in the win column,” Hill said.