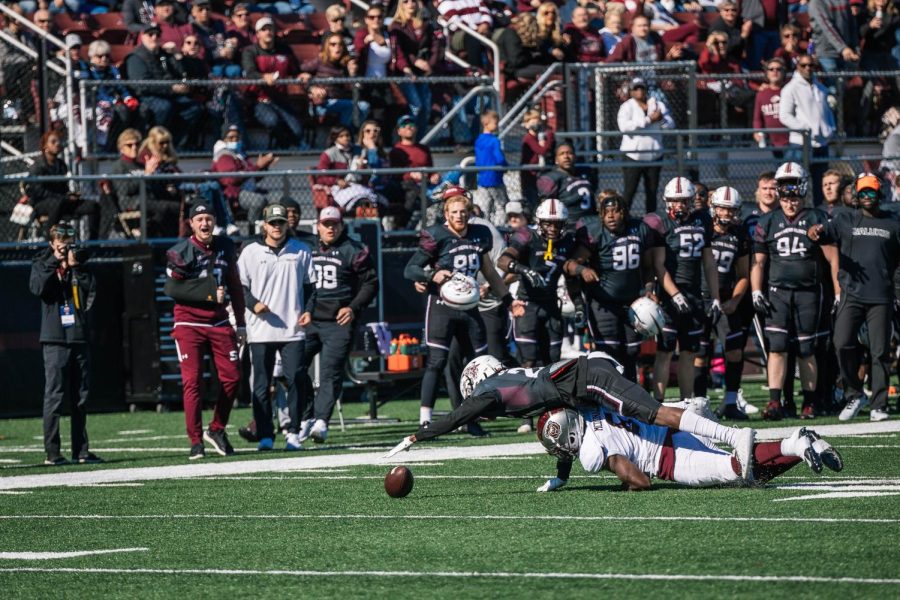 Dre Newman, SIU center back, lunges over a Missouri State University player for possession over the ball Nov. 6, 2021 at Saluki Stadium in Carbondale, Ill.

This was also the Salukis’ military appreciation game. The team wore special edition helmets with camouflage painting, and had a break in the game to honor any veterans in Saluki Stadium.

The Bears received the ball to start the game. During the drive, sophomore linebacker Zach Burrola was ejected for targeting at 13:04 in the first quarter.

Missouri State capped off the drive with a rushing touchdown by junior quarterback Jason Shelley with 9:48 left in the first quarter.

The Salukis were forced into a three and out on their first drive of the game. However, freshman cornerback Dre Newman, recovered a muffed punt by the Bears’ return man. This positioned the Salukis inside the opponent’s 20-yard line.

Salukis used the turnover to even the score after sophomore quarterback Nic Baker threw a 17-yard touchdown pass to junior running back Justin Strong. The game was tied 7-7 with 8:37 left in the first quarter.

The Salukis forced a fumble on the Bears’ second drive, recovered by freshman defensive end Richie Hagarty. The Salukis weren’t able to capitalize as they turned the ball over on downs.

Missouri State regained the lead after sophomore kicker Jose Pizano hit a 51-yard field goal. That made the score 10-7 with 52 seconds left in the first quarter.

Senior defensive end Anthony Knighton became the Salukis all-time leader in career sacks with 24.5 sacks. He passed James Phillips with this historic sack with 6:10 left in the second quarter.

Head Coach Nick Hill said Knighton has been instrumental not only for the team, but for the program as a whole.

“I could go on and on and on about what he’s meant to the program[…] there are not many guys who have been so incredibly tough like Anthony Knighton,” Hill said.

Freshman cornerback David Miller hurdled a receiver for an interception with 18 seconds left in the first half. The Salukis were able to get into field goal range, and Gualdoni kicked a 55-yard field goal to help the Salukis gain their first lead of the game as the clock expired.

The score at halftime was 13-10, Salukis in front.

Hill said failing to come out the gate strong was what led to his team faltering.

“We have to be able to score and put that team away. We should’ve gone up two scores, but we didn’t do it. Our following two possessions were three-and-outs, and so we gotta be better,” Hill said.

Missouri State regained the lead after Shelley ran it in for his second touchdown of the game, to make the score 17-13, with 3:14 left in the third quarter.

The Bears continued their momentum after forcing a stop on the Salukis, then drove down the field and scored another touchdown by senior running back Tobias Little.

Missouri State wouldn’t take their foot off the gas pedal, as junior running back Kevon Latulas ran it 87 yards to the house with 12:03 left in the fourth. The Bears went up big, 31-13.

SIU scored with 10:26 left in the fourth, hoping to rally a comeback. The touchdown was scored by freshman wide receiver Izaiah Hartup with the pass from Baker.

Baker answered with a touchdown pass to sophomore tight end Tyce Daniel, where Hartrup also completed a two-point conversion. It became 38-28, with a sliver of hope remaining for the Salukis.

That hope was not enough however, as the Salukis failed to get a stop, and the Bears were able to run out the clock. This sealed the upset win for Missouri State, 38-28.

Baker led the game in passing yards and touchdowns, with 262 yards and 3 touchdowns respectively. Their leader on defense was senior linebacker Bryce Notree, who totalled 13 tackles.

Senior wide receiver Landon Lenoir said he and his teammates need to have a short memory after today’s loss.

“Coach Hill reminds us that November is when we need to play our best ball, but we haven’t been doing that. November isn’t over so we still got two more games (to get things right),” Lenoir said.

Lenoir said this one hurt a little bit more because the team wasn’t able to get it done on the military appreciation game. The players wanted to show out for the veterans who made it to the game.

SIU will play its next game on Saturday, Nov. 13 against Indiana State. The contest will be played at noon in Terre Haute, Indiana.